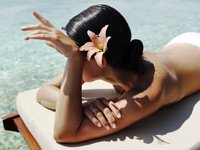 For most people, a cancer diagnosis is a turning point in their lives.  The thought that death could be imminent is very scary and sobering.  Once the disease is considered in remission, it is cause for celebration, but life afterward is usually tempered by the desire to do everything possible to remain healthy and illness-free.  Or at least, that’s the expectation most of us would have.  According to new research, though, that may not be the case for a sizeable segment of melanoma survivors who seem quite willing to engage in behaviors that may risk sun damage to their skin.

The study, which was conducted at the Yale School of Medicine in New Haven, Connecticut, found that regular unprotected exposure to ultraviolet light rays was not uncommon among those who had lived through a bout with melanoma.1 Jaslow, Ryan. “”Shocking” number of melanoma survivors tan, don’t wear sunscreen: Study.” CBS News. 9 April 2013. Accessed 17 April 2013. http://www.cbsnews.com/8301-204_162-57578621/shocking-number-of-melanoma-survivors-tan-dont-wear-sunscreen-study   The participants were more than 27,000 adults from across the United States who had responded to a health survey in 2010.  Of this large group, the researchers isolated 171 subjects who reported an earlier diagnosis of melanoma.

In general, the melanoma survivors tended to be more careful about sun protection than the public at large.  The study found that 15.6 percent of those who had suffered from melanoma sought out shady areas if they were going to be outside for longer than an hour (which means 84.4% did not) compared to 10.5 percent of the rest of the population.  They were also better about covering up their skin.  More than 31 percent of melanoma survivors reported wearing a baseball cap when outdoors and 20.5 percent chose hats with a wide brim, as opposed to their peers without melanoma, 18 percent of whom wore baseball caps and a mere six percent who went with wide-brimmed hats.  In addition, 12 percent of melanoma survivors opted for long sleeved shirts in the sun, while only about five percent of the remainder of the subjects report wearing long sleeves.

While those numbers are far from ideal for people who have never had a diagnosis of skin cancer, they are downright disturbing for the melanoma survivors.  And that part of the findings was the good news.  When it comes to wearing sunscreen during time spent outdoors, more than 27 percent of the melanoma sufferers said they don’t use it.  There were 15.5 percent of this group who said they rarely or never seek out the shade when they are outside for a lengthier period of time.  And, perhaps worst of all, two percent of melanoma survivors admitted to going to a tanning salon.

Now, tanning salons are just a bad idea all around for everyone, cancer survivor or not.  They are dangerous, and have been linked in studies to several types of skin cancer including melanoma and cancer of the eye.2 “Indoor Tanning.” Centers for Disease Control and Prevention. 21 March 2013. Accessed 19 April 2013. http://www.cdc.gov/cancer/skin/basic_info/indoor_tanning.htm   And the tanning salon industry has a long history of denial of these facts.  A 2012 investigation funded by the Energy and Commerce Committee of the U.S. House of Representatives found that 90 percent of the tanning salons approached with questions about safety denied that there is any link between tanning beds and cancer.3 Conley, Mikaela. “Congressional Investigation Finds Tanning Salons Lie About Health Risks to Patrons.” ABC News. 1 February 2012. Accessed 19 April 2013. http://abcnews.go.com/Health/federal-investigation-finds-indoor-tanning-salons-deny-health/story?id=15483714#.UXG-Whwbwg0

But even if we never enter a tanning salon again, our overall protection from UV light exposure needs to be better.  Melanoma is likely the most hazardous type of skin cancer because if it metastasizes, it is very difficult to treat and often fatal.4 “Melanoma.” Skin Cancer Foundation. Accessed 19 April 2013. http://www.skincancer.org/skin-cancer-information/melanoma   When caught at an early stage, however, melanoma does respond well to treatment so it is essential to have any suspicious skin growth checked by a doctor.  Those considered at higher risk of developing melanoma are people with frequent sun exposure and particularly those who have had a significant sunburn, sun damage to skin, fair skin, numerous moles, and a family history of skin cancer.  Another major risk factor is a previous case of any type of skin cancer, so melanoma survivors should be particularly careful not to take a chance of having a recurrence.

And melanoma cases “appear” to be steadily growing.  A 2010 study at New York University Medical Center in New York City found that the average American’s risk of melanoma in his or her lifetime increased from one in 1,500 in 1930 to an incredible one in 58 by 2010.5 Laino, Charlene. “Melanoma Cases on the Rise.” WebMD. 9 March 2010. Accessed 19 April 2013. http://www.webmd.com/melanoma-skin-cancer/news/20100309/melanoma-cases-on-the-rise   Then again, there is more than a little evidence that the large increase in reported incidence is likely due to diagnostic drift which now classifies benign lesions as stage 1 melanoma.6 Levell NJ, Beattie CC, Shuster S, Greenberg DC. “Melanoma epidemic: a midsummer night’s dream?” Br J Dermatol. 2009 Sep;161(3):630-4. http://www.ncbi.nlm.nih.gov/pubmed/19519827   Nevertheless, it’s in all of our best interest to protect our skin by avoiding excess exposure to the sun during midday hours, finding shade if we’re outside, and covering up with hats and clothing–if for no other reason than to avoid premature aging of the skin.  Learning to be vigilant about avoiding UV rays and doing self checks of your body can go a long way toward remaining melanoma-free. You also might want to think about eating more blueberries and supplementing with modified citrus pectin, both of which have been shown to help prevent melanoma.

Gallery image with caption: How Laetrile Works, B17

Gallery image with caption: Radiation Therapy, What Comes After?