Ellen had enjoyed eating shellfish all of her life, starting when she was a little kid. She lived by the ocean and the parties she threw for friends often featured clams, boiled lobster, and the like. But on her 65th birthday, her throat starting closing up after she polished off some seafood chowder. She was rushed to the emergency room, and there she discovered that along with becoming eligible for Medicare, she also had developed an allergy to one her beloved special foods, shrimp.

Most of us know our political leanings, the type of partner that attracts us, and what foods we’re allergic to by age 21.  A peanut allergy, for instance, usually starts in childhood and carries over into tax-paying years. Same thing with wheat or soy allergy. The common theme is that the allergy first shows up in childhood. Most often it continues into adulthood, but not always.

Because we think of allergies as a youth-onset condition, most of us hardly expect to suddenly become allergic to foods we’ve enjoyed our entire lives on our 30th or 60th birthday. But adult-onset allergies occur with more frequency than you might expect. In fact, a 2014 study of 1111 individuals aged 18-86, from the Northwestern University Feinberg School of Medicine, found that 15 percent of new food allergies develop after age 18.1“New Findings in Adult Onset Food Allergy.” 20 October 2014. Fare. 4 August 2016. http://blog.foodallergy.org/2014/10/20/new-findings-in-adult-onset-food-allergy/ With kids, allergic boys outnumber girls, but among the adults in the study, women developed new allergies at a rate almost twice that of men. 2Kandor, Toral A., MD, et al. “Prevalence and characteristics of adult-onset food allergy.” January-February 2015. The Journal of Allergy and Clinical Immunology: In Practice. 5 August 2016. http://www.jaci-inpractice.org/article/S2213-2198(14)00301-8/abstract

At least one type of food allergy is more likely to develop in adulthood than in childhood: shellfish allergy, which occurs for the first time in adults 60 percent of the time. Also, 39 percent of new fish allergies begin after age 18. The other food allergies most likely to arise in adulthood mimic the list for kids:  tree nuts, shellfish, fish, soy, and peanuts. The difference is that allergies to eggs, milk, and wheat are more common among children. Allergies to fruits and vegetables also frequently arise in adults because the proteins in the fruits may resemble the proteins in pollens, which the adults may already be sensitive to.3“Adults with Food Allergies.”

Another finding in the Northwestern study was that the later the age of onset of a new allergy, the more severe the allergic reaction. According to study author Paul Bryce, the reason age correlates with severity of reaction might have to do with factors other than the allergy itself.4 Nath, Ishani. “Adult-Onset Allergies: Who’s More Likely to React—and Severely.” Allergic Living. 5 August 2016. http://allergicliving.com/2014/11/20/searching-for-answers-to-adult-onset-allergies/

“We don’t know whether it’s that the actual reactions that the older individuals are having are more severe,” he explains, “or whether some of the diseases that begin to show as people age, such as blood pressure problems or cardiovascular disease, are influencing the decision to go to the emergency room.”

On the other hand, many adults believe they have allergies to foods to which they’re merely sensitive. Having a tough time digesting a particular type of food may or may not indicate allergy, but here’s the difference. Food intolerance involves the digestive system. Most often with a food intolerance, your body lacks the enzymes necessary to break the food down, meaning you can’t digest it properly.5 Food Allergy Versus Food Intolerance.” 7 August 2016. http://www.aaaai.org/Aaaai/media/MediaLibrary/PDF%20Documents/Libraries/EL-food-allergies-vs-intolerance-patient.pdf For example, if you are lactose intolerant, you might suffer from severe gas cramps and bloating after drinking milk. You might still be able to eat a little cheese or even have a bit of cream in your coffee without problem, but if you have a bit too much, you suffer, and that suffering will most likely manifest as intestinal distress and fatigue.

Allergies, on the other hand, involve the immune system. Your body recognizes the food you ingest as an unwelcome invader, and it produces antibodies in defense. The reaction you experience can be similar to a food intolerance reaction—stomach cramping and the like—but the difference is that it can be a lot worse, too, typically involving skin reactions such as hives and rashes. In the worst case scenario, you can suffer anaphylactic shock. Death from anaphylactic shock is rare, but when it does occur, most often the victims are older teenagers or young adults. Plus, if you’re truly allergic to a food, even the tiniest contact with it can set you off. For instance, if you have an avocado allergy, even slicing an avocado can bring about a reaction.

Why do allergies arise in adults? According to Dr. Bryce, “With children, there’s a thinking that it may be that children have failed to develop a tolerance to the foods that they’re encountering early in life. But with these adults, we think that this is something very different. That they’re losing tolerance to foods that they’ve already been able to be exposed to and to eat. That may be an important difference in understanding how food allergy develops rather than how tolerance is not occurring in children.”

In any event, one thing we know for sure: allergies among older adults exist in significant numbers, whether those allergies have carried over from childhood or arisen anew in maturity, and that includes among elderly patients. While older data suggested that only five to ten percent of elderly patients had food allergies at all, that low estimate was thrown into the trash bin with a recent nursing home study that found the true incidence closer to 25 percent.6 Pyle, Encarnacion. “Healthy Seniors: Food Allergies Can Develop as People Age.” 27 March 2016. Columbus Dispatch. 5 August 2016. http://www.dispatch.com/content/stories/local/2016/03/27/your-health/1-healthy-seniors-food-allergies-can-develop-as-people-age.html

The other thing we know for sure is that allergies among those of any age are increasing exponentially. Some experts say that it’s because we’re too hygienic in the developed world, so kids aren’t developing immunity to germs early enough. Other theorists blame antibiotics and other drugs for altering intestinal flora, while yet others point to widespread vitamin D deficiency and increasing use of pesticides and additives in food.7 “Increasing Rates of Allergy and Asthma.” http://www.aaaai.org/conditions-and-treatments/library/allergy-library/prevalence-of-allergies-and-asthma Then again, maybe it’s not one thing but the cumulative impact of all those things.

What can you do to prevent yourself from developing a food allergy? It might already be too late for you if you’re well on your way to developing a food allergy, but you can certainly protect your children and at least try to minimize your risk by avoiding overuse of antimicrobial cleaners and soaps, by eating organic foods free of pesticides and additives, by using digestive enzymes with meals and taking probiotic supplements, by regularly supplementing with immunomodulators such as carnosine and astragalus to control overreaction by your immune system, by minimizing use of pharmaceutical drugs, and by keeping your immune system bolstered. 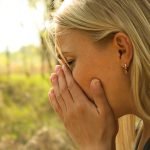