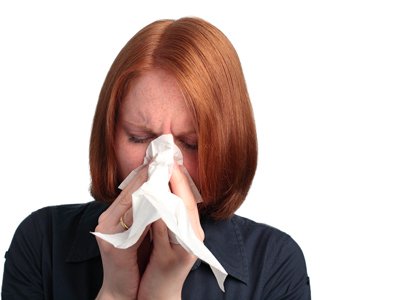 New research out of Ohio State University in Columbus has found that stress might be responsible for making allergy symptoms even worse.

Spring is in full swing, reminding us of all of the benefits the season has to offer. Temperatures are on the rise, flowers are blooming, and the sun is setting later. But amidst all the wonders of spring, there are a few definite negatives that can make some people decidedly uncomfortable. For those with seasonal allergies, this time of year can be very difficult as you have to deal with itchy eyes, runny noses, headaches, and more. And now, new research has found that stress might be responsible for making allergy symptoms even worse.

The study, which took place at Ohio State University in Columbus, discovered a link between experiencing a lot of stress and having a flare up of seasonal allergies.1 Preidt, Robert. “Stress may make allergy symptoms worse.” CBS News. 18 April 2014. Accessed 27 April 2014. http://www.cbsnews.com/news/stress-may-make-allergy-symptoms-worse The subjects were 179 adults who had all previously been diagnosed with hay fever. Over the course of a 12-week period, the researchers assessed them to determine the extent of their allergies. They found that 39 percent of the participants dealt with more than one allergy attack during this timeframe, and this group had higher stress levels than did their counterparts who were not suffering from any allergic symptoms in the study period.

Within the cluster of subjects experiencing allergy symptoms, 64 percent of them who faced significant amounts of stress went through two 14-day phases in which they suffered from at least five bouts of symptoms. Interestingly, the allergy flare-ups did not tend to occur on the day that the stress was most pronounced, but rather a day or two later. It is not clear what might cause this delayed reaction. However, the overall findings make sense according to a 2013 study also conducted at Ohio State University, which found that stress can alter the genes of immune cells,2 Powell, Nicole D.; et al. “Social stress up-regulates inflammatory gene expression in the leukocyte transciptome via B-adrenergic induction of myelopoiesis.” Proceedings of the National Academy of Sciences. 21 August 2013. Accessed 28 April 2014. http://www.pnas.org/content/110/41/16574.abstract?sid=b31d78ad-25b0-48b6-9074-850080072b54 and it is the immune system that is ultimately responsible for our allergies.

Allergies begin when the immune system mistakenly identifies harmless substances such as pollen as dangerous invaders. This reaction results in the production of Immunoglobulin E antibodies that release histamines, which are biochemicals associated with inflammation and which get sent out into the bloodstream. This is what produces the symptoms commonly known as an allergy attack. Depending on the severity of an individual’s allergies, some people have trouble avoiding their triggers short of staying inside the house with every window tightly closed during allergy season (unless of course their triggers include indoor allergies such as dust mites and animal dander too).

The current study only demonstrated a link between allergies and stress; it was not designed to prove cause and effect. But if stress is a potential cause of allergy flare-ups–and we already know for sure that stress compromises the immune system–it stands to reason that reducing stress levels should help keep symptoms at bay. While it will not be a cure for allergies, as the body won’t just stop releasing histamines in reaction to the substance you are allergic to, less stress might reduce the frequency and intensity of the symptoms if this study’s findings are true. What’s more, it is possible that allergy sufferers go through a vicious cycle wherein stress increases allergy symptoms, then the resulting flare-up aggravates the problem by further increasing stress levels.

If you’ve got allergies, it couldn’t hurt to do a little experiment and try to relieve some of your stress to see if your symptoms decrease as well. Stress has been linked to so many ailments, you would be benefiting yourself all around. Start off by eating a nutritious diet that includes lots of antioxidants and doing your best to get a good night’s sleep. A 1997 study at the University of Pennsylvania School of Medicine in Philadelphia found that just one week of sleeping only four to five hours a night led to much higher stress levels.3 Dinges, DF; et al. “Cumulative sleepiness, mood disturbance, and psychomotor vigilance performance decrements during a week of sleep restricted to 4-5 hours per night.” Sleep. April 1997. Accessed 28 April 2014. http://www.ncbi.nlm.nih.gov/pubmed/9231952 Incorporate an exercise routine into your life every day. Try some forms of relaxation such as yoga, meditation, writing in a journal, or massage to see what best melts your stress away.

There are other natural approaches that can help conquer allergies. Colon cleanses and liver detoxes rid the body of toxins that build up thus allowing your body more room to “accommodate” allergens without triggering an all-out response. Certain nutraceutical supplements containing immunomodulators such as L-carnosine and Cetyl myristoleate can help regulate and calm the immune system. But one of the best things you can do is supplement with enzymes–both digestive and systemic proteolytic. Digestive enzymes help break down the proteins in your food so that they are less likely to trigger immune responses in the first place. And systemic proteolytic enzymes break down the allergens already in your bloodstream, not to mention the circulating immune complexes lodged in your soft tissue, which are major allergy triggers. If you can lower your stress levels, get rid of offending proteins, and modulate your immune system to get your allergies to subside, you just might be able to leave home without a super-size box of tissues and enjoy the outdoors this spring.