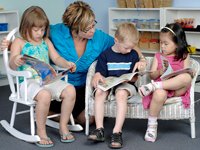 Depression is amongst the most common women’s health issues, estimated to affect more than 12 million women in the United States.1 “Depression Facts & Statistics.” Depression Perception. Accessed 25 June 2013. http://www.depressionperception.com/depression/depression-facts-and-statistics.html   Some of them battle with depression throughout their lives, while for others it only comes up once or twice.  Depression often strikes women after childbirth–known as post-partum depression.  This can be very serious, lasting for many months or even years and resulting in difficulty for the mother in bonding with and caring for her baby.2 “Postpartum depression.” National Institutes of Health. 19 September 2012. Accessed 25 June 2013. http://www.nlm.nih.gov/medlineplus/ency/article/007215.htm   It can also profoundly affect the emotional state of a child during the important formative years before elementary school begins.  But now, new research provides hope for mothers dealing with depression…or at least their children. It seems that having the child attend a daycare center can reduce the impact of a mother’s depression on the psychological status of her child.

The study, which took place at the University of Quebec at Montreal in Canada, found that children of depressed mothers may have a lower risk of developing an emotional disorder themselves if they are placed in daycare.3 Pittman, Genevra. “Daycare may benefit kids of depressed mothers.” Reuters. 21 June 2013. Accessed 24 June 2013. http://uk.reuters.com/article/2013/06/21/us-health-daycare-epressed-mother-idUKBRE95K14020130621   The subjects were nearly 1,800 children born in 1997 or 1998 in Quebec.  For a period of five years after having these children, the mothers were interviewed intermittently.  The researchers questioned the women about any symptoms of depression they were experiencing as well as indications of separation anxiety, depression, or other mental health challenges their children were facing.  The mothers were also asked each time about their childcare arrangements.

Over the course of the research, almost 20 percent of the mothers indicated showing signs of depression.  A 2004 study conducted through the Canadian Paediatric Society in Ontario, found that the children of mothers with depression have lower cognitive performance, more difficulty with internalized problems (i.e., depression) and externalized problems (aggression and destructive tendencies), and have higher rates of both anxiety and affective disorders.4 Bernard-Bonnin, A. “Maternal depression and child development.” Paediatrics & Child Health. October 2004. Accessed 25 June 2013. http://www.ncbi.nlm.nih.gov/pmc/articles/PMC2724169   However, the current experiment determined that the children of depressed mothers who were in daycare had a 79 percent lower likelihood of developing separation anxiety and other emotional problems compared to their peers who were cared for at home daily by their moms with depression.

Obviously, not all of the mental health issues faced by the children were in direct correlation with the mother’s depression; other factors come into play as well.  In the study, the percentage of children with these conditions varied from 9 to 31, but some of this fluctuation was due to the mothers growing depressed at times and the setting of the care the youngsters were receiving.  The children were shown to be the most resilient to their mother’s emotional state when they were in a group daycare setting as opposed to in the care of a babysitter or adult relative.  And the number of hours a child spent in daycare each week did not have nearly as much influence as where the care took place.

There are a number of reasons why a group daycare facility might make the biggest difference in the emotional development of a young child.  In a “quality” daycare center, the activities are structured by a professional who has been educated and trained to specialize in the needs of early childhood.  The social aspect of a group setting may be beneficial too. Studies such as the Abecedarian Project of the University of North Carolina at Chapel Hill, have shown that spending time in a quality daycare program among other children of similar ages can foster both cognitive development and social skills over the long term.5 “Benefits of high quality child care persist 30 years later.” University of North Carolina at Chapel Hill. Accessed 25 June 2013. http://uncnews.unc.edu/content/view/5032/107   This is something that might be missing for many young children home every day with a depressed mother who does not feel up to being in the company of other adults or children.  It is also harder to achieve age-appropriate socialization when care is provided by a babysitter or relative only looking after that child.

Aside from providing a haven where a young child can be nurtured and spend time with other kids, daycare can offer a respite for a mother with depression.  Time off from child rearing can be used to take care of her own needs, whether that is some form of relaxation, stress relief, or talking with a therapist or support network.  The bottom line is that if daycare can work to enhance the mental health of both the mother and child in the long run, it is an option worth considering.

But then again, perhaps it makes even more sense to get to the source of the problem: the mother’s postpartum depression. And here, we can turn to what Jon Barron said on the topic.

“Depression after pregnancy is called postpartum or peripartum depression and is most likely triggered by hormonal changes. During pregnancy, the amount of progesterone in the body (aka the “feel good hormone”) increases greatly. In the first 24 hours after childbirth, the amount of progesterone plummets back down to normal non-pregnant levels. In many women, this can trigger a profound depression–particularly in anyone already prone to bouts of depression. Using an all natural progesterone crème to help restore levels so that they can be backed down more slowly can literally be life saving.”

Gallery image with caption: The Value of Vitamin D after Menopause