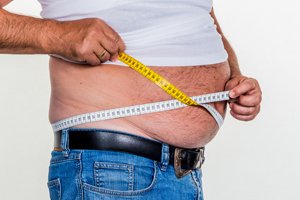 “I got fat, and I decided to do something about it, so I got fatter,” says author Jarod Kintz. His attitude seems to be reflected in the collective weight trends in the United States, where a new study reveals that we’re even more overweight than we thought we were.

The news was bad enough before this latest study came out: reports consistently indicated that three-quarters of the US population was overweight and almost one-third obese.1 Newman, Laura. NHANES: One in three adults, one in six children obese.” 17 January 2012. Medscape. 21 November 2014. http://www.medscape.com/viewarticle/791128 Very disturbing numbers! At least, though, on a state-by-state basis, the picture looked a little brighter. While a few states had very high obesity rates that skewed the nationwide averages a bit, most maintained obesity rates under 30 percent.

And then in September, a new and even sadder report came out, released by the Trust for America’s Health and the Robert Wood Johnson Foundation. That report prompted headlines like “Obesity rates reach historic highs in more U.S. states,” (Reuters), and “Not a single state decreased its obesity last year,” (The Week). According to the study, obesity rates exceeded 30 percent in 20 states.2 Reuters Staff. “Obesity rates reach historic highs in more U.S. states.” 4 September 2014. Reuters. 21 November 2014. http://www.reuters.com/article/2014/09/04/us-health-obesity-idUSKBN0GZ1D420140904 The year prior, the same group reported that “only” 13 states had obesity rates exceeding 30 percent. In other words, in just one year, seven states increased obesity rates and none showed a decline.

Now, incredible though it seems, we have an even more alarming report in hand from the National Health and Nutrition Examination Survey (NHANES).3 “United States is a Lot Fatter Than We Thought, Study Says.” 19  November 2014. Youth Health. 21 November 2014. http://www.youthhealthmag.com/articles/2548/20141119/obesity-in-the-united-states-obesity-rate-fattest-states-zachary-ward.htm According to this new report, virtually every state has been underestimating its obesity rates, meaning that obesity in this country is considerably more widespread than the reports have been showing.

The new report indicates that while respondents in the earlier studies may have accurately reported their weight, they’ve been overestimating their height. “People say they’re taller than they really are,” according to Dr. Zachary Ward from the Harvard School of Public Health.4 Rettner, Rachel. “Many US states are even fatter than we thought.” 21 November 2014. Live Science.21 November 2014. http://www.cbsnews.com/news/many-u-s-states-are-even-fatter-than-we-thought/ When height is corrected for, every single state, with the exception of Hawaii, has obesity rates over 30 percent. In two states, Louisiana and Mississippi, over 40 percent of the population is obese. In previous reports, no state exceeded 40 percent.

Apparently, surveys by such venerable research bodies as the Centers for Disease Control (CDC) rely on self-reported phone data. The CDC studies on weight are among the most quoted and most trusted. The fact is, though, that to gather obesity data, the CDC researchers have been calling people on the phone and asking them their weight and height. The most recent CDC survey, called the Behavioral Risk Factor Surveillance System (BRFSS), reported an overall obesity rate in the United States of 28 percent. The NHANES survey, on the other hand, relied on height and weight information as reported by physicians, and that study found an overall US obesity rate that’s six percent higher, or 34 percent. The difference means that an additional 16.5 million people are obese.

According to Dr. Ward, “Current [obesity] maps vastly underestimate the adult obesity burden nationwide. These are not big changes at the individual level, but they can result in huge changes at the population level.”

One reality underlined by virtually all the studies is how closely obesity rates align to race and economics.5 Ferdman, Roberto O. “The states where Americans are the most and least obese.” 4 September 2014. The Washington Post. 21 November 2014. http://www.washingtonpost.com/blogs/wonkblog/wp/2014/09/04/the-states-where-americans-are-the-most-and-least-obese/ According to the Trust for America’s Health September report, the 10 states with the highest obesity rates are clustered in the US south: Mississippi, Louisiana, Arkansas, Oklahoma, Tennessee, Alabama, Kentucky, South Carolina, West Virginia, and Indiana. All of these states, except Indiana, number among the 10 poorest states, too.

Inversely, four of the 10 wealthiest states–California, Connecticut, Massachusetts, and Hawaii–are also among the 10 thinnest. The other six comparatively thin states–Colorado, Utah, Vermont, New York Minnesota and Montana–do not rank among the 10 wealthiest. Experts point out, though, that these states are rich in amenities that the poor Southern states lack, such as abundant outdoor recreational opportunities, excellent access to healthy and fresh food, and good medical care.

As for the impact of race, the overall obesity rate among blacks, for instance, exceeds 40 percent in 11 states and soars above 30 percent in 41 states. Whites, in contrast, show obesity rates higher than 30 percent in only 10 states. The difference again comes down to access. A measly eight percent of black adults live within reasonably close range of one or more supermarkets, compared to 31% of white Americans. At the same time, black neighborhoods tend to have a disproportionate number of fast-food restaurants. A recent study found that access to fast food was an average of 3.56 miles closer to home in black neighborhoods when compared to white neighborhoods of similar size and composition.6 P James et al. “Do minority and poor neighborhoods have higher access to fast food restaurants in the United States.” 29 September 2014. Pub Med. 21 November 2014. http://www.ncbi.nlm.nih.gov/pubmed/24945103 The result is that a startling 73.9% of black men are either overweight or obese, and 63.7% of black women. Overall, blacks show a 47.8 percent obesity rate.

The bottom line is gloomy bad news: as we’ve said before, we’re collectively getting more overweight and more obese, and now it looks like overweight means even more overweight than we thought. The trend is particularly disturbing if you consider that back in 1980, there wasn’t a single state with more than 15 percent obesity, while now, virtually every state has double that rate.