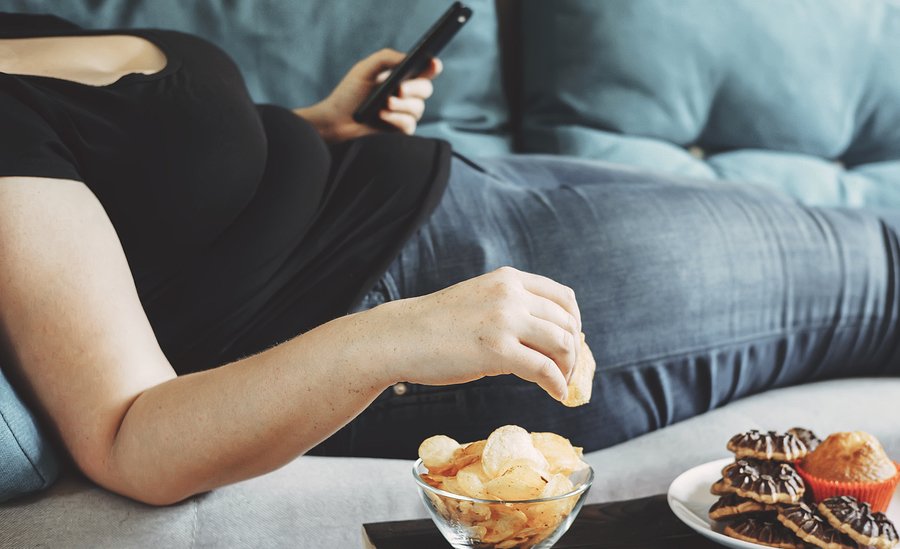 Nowadays, we have no shortage of technology. Our smartphones alone can give us everything from communication with others to weather reports to music we want to hear to driving instructions to our next location. Then, throw in Apple watches, tablets, laptops, and the like, and we’ve got an endless stream of technological connectivity at our fingertips 24/7. But this wired up world we live in may come at a cost above and beyond the subscription fees we sign up for to be part of it. New research suggests that a lot of time spent on smartphones and other devices could be linked to putting on extra pounds.

The study, which took place at Rice University in Houston, Texas, found that the media multitasking associated with our use of smartphones and similar digital devices is associated with greater weight gain.1Lopez, Richard B.; et al. “Media multitasking is associated with higher risk for obesity and increased responsiveness to rewarding food stimuli.” Brain Imaging and Behavior. 1 March 2019. Accessed 14 April 2019. http://link.springer.com/article/10.1007/s11682-019-00056-0. These results are based on an investigation that included 132 male and female students between the ages of 18 and 23.

After providing information on their height and weight, all the subjects completed a questionnaire that covered topics such as how often they tend to multitask and whether they are easily distracted. The researchers teased out inappropriate or compulsive cellphone behaviors with targeted questions like, “Do you feel the urge to check your phone while you’re talking to someone else?” Once the scores were analyzed against the participants’ body mass index (BMI), it was determined that those with higher scores of inappropriate or compulsive cellphone use generally had higher BMIs than their peers with lower scores.

In the second portion of the investigation, 72 of the volunteers were given an MRI. During the scan, a series of images was shown that included photos of an array of high-calorie foods. Not surprisingly, when they were looking at the pictures of food, increased activity was noted in the ventral striatum and orbitofrontal cortex—both of which are reward centers in the brain. Notably, the subjects with the most brain activity while viewing food images were also the ones who were identified as spending the most time at on-campus eateries based on their cell phone GPS tracking.

We need to keep in mind that this research is limited by its small population sample and the lack of diversity in the age of the participants. It also was not designed to prove cause and effect, so it only establishes a connection between media multitasking and being overweight, not showing that the behavior results in weight gain. And yes, it is possible that those who had the greatest tendency to overeat also had a built-in predilection to be drawn into compulsive cellphone usage. But that doesn’t negate the study’s conclusions. In fact, it reinforces them.  By including the MRI in the study, it provides stronger evidence that there is, in fact, a link between frequent use of media on smartphones and the like and a higher risk of being overweight or obese because both relate to the same reward-related areas of the brain.

Smartphones have only been in existence since the mid 1990s, so we do not understand all their potential effects on users. What’s more, the young adults participating in this study have been using cell phones most of their lives, and it is possible that multitasking on smartphones for years may be contributing to changes within their still-developing brains that might not be the case in older populations. It would certainly be interesting for the investigators to expand on this topic and evaluate both younger and older volunteers side by side.

In the meantime, the results serve as a good reminder to us that, if nothing else, cellphones can put us in danger of getting distracted, which is associated with mindless eating. If you’re sitting around checking social media on your smartphone or laptop, don’t make food readily accessible. In a similar vein, a 2014 study at Cornell University in Ithaca, New York showed that watching fast-paced television shows and movies is also linked with eating mindlessly. And let’s not forget the damage we can do to our relationships if we are checking our phones instead of actually talking to the person in front of us. So, for all these reasons, find ways to curb your smartphone use, at the very least when you are eating or spending time with others.