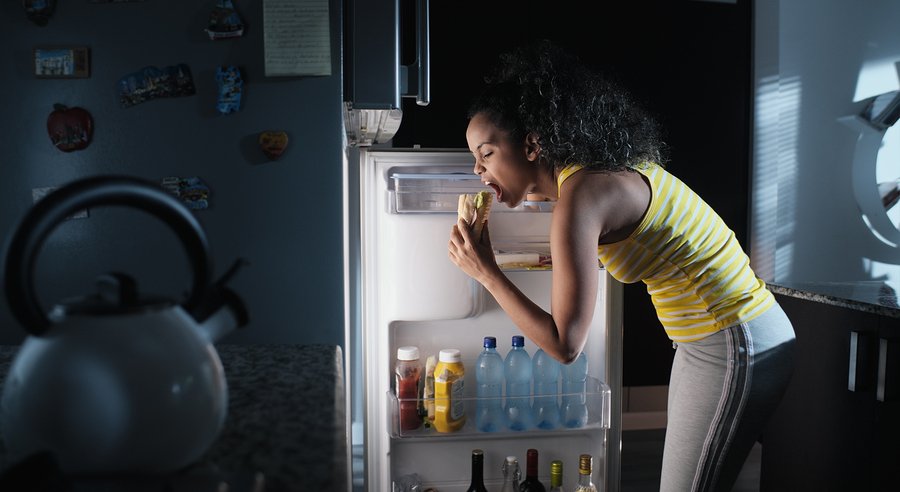 Life can get very hectic some days, and you find yourself rushing around after work taking care of all kinds of responsibilities. By the time you get home and make dinner, it might be pretty late, and you are likely very hungry. While you may think it’s not such a big deal to eat a late dinner, according to new research, it could be taking a significant toll on your waistline.

The study, which took place at the University of Colorado School of Medicine in Aurora, found that eating later in the evening is associated with more excess weight and body fat.1Zaman, Adnin; et al. “Eating later in the day may be associated with obesity.” Endocrine Society. 23 March 2019. Accessed 31 March 2019. http://www.endocrine.org/news-room/2019/endo-2019—eating-later-in-the-day-may-be-associated-with-obesity. These results are based on an investigation that included 31 overweight or obese adults, 90 percent of whom were women. The average age of the subjects was 36 years old.

Prior to the study beginning, each of the participants was provided with wearable devices that would monitor their activity throughout the day and their sleep at night for one week. During this week, the volunteers also used an app called MealLogger, which time stamps photos they took of every food they consumed. The researchers noted each subject’s weight and height to calculate their body mass index (BMI) and measured their body fat.

By analyzing the meal timing and sleep habits of the participants, the investigators were able to determine that those who ate later in the day were more likely to have a higher BMI and more body fat. The typical food consumption in a day extended approximately 11 hours, with eating beginning at an average time of 9 a.m. and ending around 8 p.m.

Interestingly, most of the participants who tended to eat later at night also went to bed later, so any difference was not related to dining then going right to sleep. Nor was it due to a lack of sleep on the part of the later eaters. All the volunteers slept for an average of seven hours per night, regardless of the timing of their eating habits.

Unfortunately, the study has limitations due to its design. It only included a very small population sample, and, since it was so heavily female, it is difficult to conclude whether the same results would be found among men. What’s more, the investigators did not specify the hours that they defined as late-day eating, nor did they keep track of the subjects’ caloric intake and the nutritional value of the foods they ate. Therefore, we don’t know whether these people with a tendency to eat later in the day were banking most of their calories for a big dinner, eating lots of junk food at night, or some combination of the two.

That being said, this is not the first time nighttime eating has been linked to excess weight. A 2014 study at the Salk Institute in La Jolla, California showed that even when the same quantity of food is consumed, eating later in the day leads to greater weight gain. And it makes sense. There are probably multiple factors at play, including a tendency to overeat when we’re extremely hungry (in the case of people who skimp on breakfast and lunch to save their calories for a bigger dinner), slower metabolism at night because we’re not as active, and the kinds of foods people tend to eat when they are tired and just sitting around watching television at the end of the day (i.e. grabbing a bag of chips or cookies).

If you have a habit of eating late in the day, try to establish why and make some changes to your behavior. If you tend not to eat much earlier in the day, make an effort to take in more of your calories at breakfast and lunch and eat a lighter dinner. You will probably feel better and have more energy throughout the day if you are eating nutritious meals every few hours. And if your habit is to snack at night, find things to keep yourself occupied that aren’t conducive to eating, such as going for an evening stroll or using your hands to knit. When you are just relaxing at home, don’t keep junk food available. Instead, keep a stash of fruits and vegetables washed and ready to eat so at least any nighttime indulgences will be healthy and low in calories.