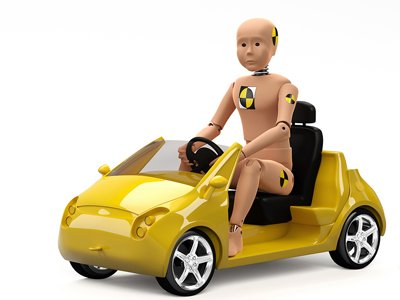 When it comes to miserable outcomes, obesity scores high. Obese people have higher rates of chronic disease, lower incomes, fewer friends, and earlier deaths than their more svelte friends. It also turns out that they have more automobile accidents, and the accidents they do have tend to be more deadly.

A study last year found that the more obese you are, the more likely it is that you’ll die in a car crash.1 Bakalar, Nicholas. “An Unexpected Road Hazard: Obesity.” 21 January 2013. New York Times. 31 October 2014. http://well.blogs.nytimes.com/2013/01/21/an-unexpected-road-hazard-obesity The researchers reviewed data on more than 41,000 accidents, and out of that, identified almost 7,000 drivers involved in fatal crashes. An analysis found that only three percent of the victims were underweight, 46 percent were normal weight, 33 percent were overweight and 18 percent were obese, with a BMI (body-mass index) of at least 30.

While the fatality rates were in the expected range for those of normal or slightly elevated weight, those with higher BMIs showed higher fatality rates that climbed at a shocking pace along with their BMI. Those with BMIs between 30 and 34.9 had a 21 percent increased risk of death. The risk went up to 51 percent higher than normal for those with BMIs between 35 and 39.9, and for those with BMIs higher than 40, the risk of fatality spiked to an astonishing 81 percent more than the risk for normal-weight people. And, for obese women, the risk climbs another 50 percent over the risk for men.2 Allen, Nick. “America to introduce fat crash-test dummies.” 30 October 2014. The Telegraph. 31 October 2014. http://www.telegraph.co.uk/news/worldnews/northamerica/usa/11199291/America-to-introduce-obese-crash-test-dummies.html

The researchers aren’t sure why obese people have such elevated fatality risks, but they did posit a few theories. For one thing, they suggest that the distribution of weight in those who are obese causes them to sit in a way that puts them at greater risk in the driver’s seat. Because of the way very overweight people are built, they tend to sit farther forward in the driver’s seat, because their larger backsides push them toward the steering wheel.

“The reason [that obese people die in crashes more often] is the way we get fat,” says Chris O’Connor, who presides over a crash-test dummy manufacturing company called Humanetics. “We get fat in our middle range. And we get out of position in a typical seat.”

Also, being out-of-position causes seat belts to fit poorly. Sitting forward apparently interferes with the seat belt’s grip on the pelvic area in the case of a crash. Add to that the fact that obese people have lots of very spongy areas on their bodies, which also might cause their seat belts to fit poorly. Finally, researchers suggest that obese people are in poorer health to start with, so they have a harder time recovering from serious injuries. The study found no association between obesity and death due to seat-belts not being fastened, meaning that the obese buckled up just as often as their less overweight peers.

All of which leads to a surprising underlying problem. In spite of the fact that most of us are now overweight and that the obese are more at risk in car crashes, crash-test dummies have continued to be as thin as they were back in the skinnier 1980s. That fact has made it difficult for researchers to develop strategies to specifically protect obese crash victims.  The average weight of the current crash test dummy is 167 pounds, but the average male now weighs 191 pounds and is borderline obese, with a BMI of 29 by age 35 (obese is considered having a BMI of 30 and up).3 Hamblin, James. “This is the Average Man’s Body.” The Atlantic. 1 November 2014. http://www.theatlantic.com/national/archive/2013/10/this-is-the-average-mans-body/280194/ The researchers reasoned that if heavier people are the ones most likely to die in car crashes, and if two-thirds of adults are overweight and one-third obese anyway, the crash test dummies should be heavier to reflect that reality.4 Weight Control Information Network. http://win.niddk.nih.gov/statistics/

And so, a new, hefty line of crash-test dummies has been born, manufactured by the Humanetics Company. The new dummy weighs 270 pounds and has a BMI of 35, and is scheduled for release in 2015.5 Ferdman, Roberto A. “A depressing sign of America’s obesity problem: Fatter crash test dummies.” 28 October 2014. Washington Post. 31 October 2014. http://www.washingtonpost.com/blogs/wonkblog/wp/2014/10/28/a-depressing-sign-of-americas-obesity-problem-fatter-crash-test-dummies/ The new dummies pack the weight around the midsection and thighs, like the typical obese American. Plus, the dummies will be slightly taller than their predecessors, to reflect slight increases in height in the US population.

While obesity may be taking a toll on the economy in terms of health care costs and lost days at work, it’s a goldmine for the Humanetics Company. It turns out that it costs $500,000 to buy one dummy, and it takes at least two dummies to complete testing a single auto-one side-impact dummy, and one frontal-impact.6 “History of Crash Test Dummies.” Humanetics. 1 November 2014. http://www.humaneticsatd.com/about-us/dummy-history Then there are kid dummies, dummies to test particular vulnerabilities, and even dog dummies intended to test seatbelts for canines.

Why are the dummies so expensive? They’re packed with all sorts of data-collecting equipment to mimic human response and record exactly what happens to every part of the human body in a crash, so that they can provide reliable information about what needs to be done to enhance safety. In fact, it’s certainly arguable that they’re worth every penny. Back in the 1930s before the advent of crash tests, the fatality rate was 15.6 per 100 million vehicle miles traveled. Now, it’s 1.8. We have airbags and seatbelts developed as a result of evidence provided in crash testing, although it should be noted that the first crash-test dummies were actually human cadavers. The cadavers certainly were useful, but they presented a host of problems. For one thing, there are some ethical issues. For another, you can’t reuse a cadaver, but you can replace damaged parts and reuse the plastic dummies. And as an article in the trade journal Product Design and Development so eloquently points out, “crash-test dummies don’t go splat.”

In any event, it’s clear that packing on pounds is not good for internal or external health. And by the way, obese individuals not only suffer more in car accidents; they also have a 20 percent greater risk of injury in occupational accidents, in part because of the knee and back vulnerabilities that extra weight causes. It all adds up to yet one more reason to “just say no” when you’re tempted to eat the leftover Halloween candy after a low turnout of trick-or-treaters.