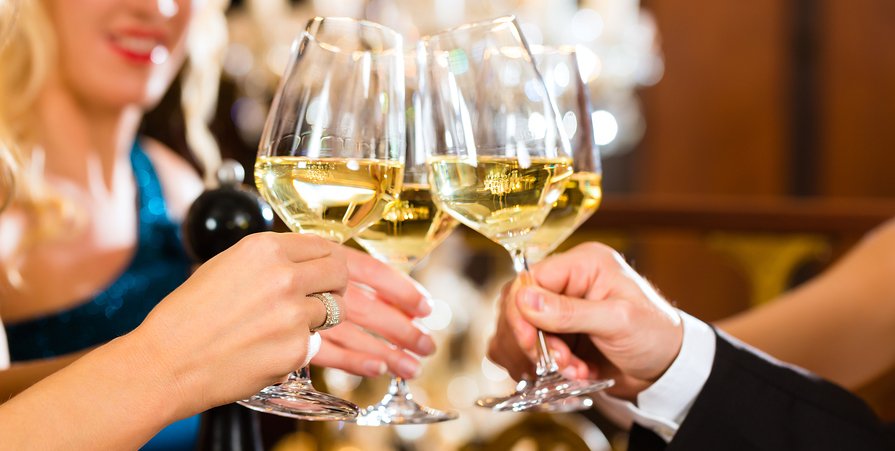 While it can be very nice to unwind at the end of a long day with a glass of wine, it’s important to keep in mind that this is not a calorie-free endeavor. Having a glass (or two or three) can add up very quickly to excess weight, if this is something you do regularly. And now there is evidence as to why those drinks come at such a high caloric cost. New research suggests that much of the problem might lie in the glassware we are using. The study, which was conducted at the University of Cambridge in the United Kingdom, found that people may be drinking considerably more wine than in the past due to a significant enlargement in glass sizes.1 Zupan, Zorana; et al. “Wine glass size in England fro 1700 to 2017: a measure of our time.” BMJ. 13 December 2017. Accessed 2 January 2018. http://www.bmj.com/content/359/bmj.j5623. These results are based on an analysis of the capacity of wine glasses used in England between 1700 and 2017. The information was obtained through museums, retail stores, and other sources that included even the crystal glasses of the British royal family.

The investigators noted a marked increase in the size of the glasses with a stem and foot that are typically used to drink wine. Back in the 1700s, the standard size glass held just 66 milliliters, or 2.2 ounces, of wine. By the 2000s, however, that jumped all the way to 417 ml, or 14 ounces, of wine in a serving. And it’s grown even more in just the past decade. The most recent glasses examined were sold in 2016 and 2017 and had a mean capacity of 449 ml, or 15 ounces of wine. Interestingly, the expansion of glass sizes was incremental from the 1700s through the later 1900s. It was in the 1990s that suddenly wine glass capacities increased dramatically.

What might cause such a pronounced shift in the size of our drinks? It may be due to wine’s increased popularity around the end of the 20th century. Prior to then, beer and liquor were the drinks of choice for most of the alcohol consuming population in the United Kingdom (and the United States as well). Wine had mainly been a drink for the upper crust, but in the 1990s, greater availability and a wider selection of varieties made it an accessible and appealing option for everyone else to drink as well.

This led to nearly a quadrupling in wine consumption between 1960 and 1980, which then practically doubled again from 1980 to 2004. As wine’s popularity grew, different shapes of glasses became trendy to use for varying types of wine. There are more than a dozen styles of wine glasses now available for specific variations of reds, whites, sparkling wines, and dessert wines.

It’s not such a leap, therefore, to expect that glasses that hold more wine will be used to drink more wine. This is the same problem we experience with plate sizes that have expanded in size in recent years. A 2011 study at Cornell University in Ithaca, New York showed that when our dining plates are larger, we eat a correspondingly bigger portion of food.2 Van Ittersum, Koert and Wansink, Brian. “Plate Size and Color Suggestibility: The Delboeuf Illusion’s Bias on Serving and Eating Behavior.” Journal of Consumer Research. 11 November 2011. Accessed 3 January 2018. http://academic.oup.com/jcr/article/39/2/215/1795747?searchresult=1. And another factor that’s potentially worse about wine is the fact that as you drink more, inebriation takes over and you become even less able to judge an appropriate amount and end up really overdoing it.

Not only is this a problem calorie-wise, but also because of health issues linked to wine consumption. Studies have shown that drinking wine frequently is associated with a higher risk of breast, liver, rectal, and digestive tract cancers. Plus, many popular wines were found just a couple of years ago to contain high levels of heavy metals and pesticides, with arsenic. Especially problematic.

To protect yourself and your health, you might want to moderate your drinking habits and perhaps just have a glass of wine or two occasionally. Make wine an every now and then type of treat, and control your portion size by pouring yourself just a half glass (which is still considerably more than our ancestors had even with multiple servings back in the 1700 or 1800s).