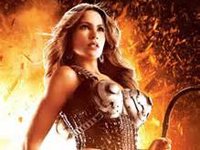 Back in the early days of women’s liberation, feminists stopped wearing bras (as well as high heels) to declare their independence from uncomfortable beauty rituals that ostensibly had been instituted primarily to please males. Then, along came Victoria’s Secret in the late 1970s with a wonderland of bra options, converting at least some formerly rabid anti-bra activists into wannabe super models with a veritable cornucopia of choices. There were sports bras, push-up bras, and underwire and strapless bras in every imaginable color and style, as well as nursing bras, nothing bras, and bras so padded you could bounce quarters off them. But even Victoria’s Secret couldn’t have predicted the new direction that lingerie has recently taken. It seems that researchers at Microsoft have developed a bra to promote natural weight loss and help women control emotional eating by measuring their moods, specifically stress and anxiety.

That’s right, there’s now a smart bra. The bra has a series of built-in sensors that constantly monitor the wearer’s heart rate (EKG), respiration, and skin temperature.1 Microsoft working on a smart-bra to measure mood.” 3 December 2013. BBC. 5 December 2013. http://www.bbc.co.uk/news/technology-25197917 The sensors are synched to a smartphone application. As soon as the bio-measures add up to show signs of stress, the wearer gets notified. It’s sort of like the old behavior modification scenario in which a rat gets shocked when it grabs for food, except in this case, the woman gets dinged with a message on her cell phone that lets her know that her bra says she’s in danger of wanting food. As for what happens at that point, the researchers aren’t clear, although it appears they plan to direct her to a Smart Phone application that helps her to get a grip on herself before she eats something nasty.2 Carroll, Erin et. al. “Food and Mood: Just-in-Time Support for Emotional Eating.” Rochester.edu. 5 December 2013. http://www.cs.rochester.edu/hci/pubs/pdfs/FoodMood.pdf

The series of bra sensors has been dubbed GRASP by Microsoft (don’t laugh), which stands for Generic Remote Access Sensing Platform. According to the Microsoft literature, GRASP “has an MSP-430 microprocessor and is powered by a Lithium-Ion polymer (3.7V) battery. GRASP can sample up to eight bio-signal channels simultaneously.”

The study on the magic bra actually was the last of a three-part study. The first segment of the study investigated which moods trigger emotional eating. As with other, similar studies, this one concluded that people eat when they feel “on edge, nervous, upset, worried, bored, irritated, restless, without anything to do, or are discouraged.” The second part of the study looked at what types of interventions actually might deter the emotional eating response. Specifically, participants who experienced triggering emotions got directed to screens on their cell phones with soothing graphics that suggested a variety of deep breathing techniques. One screen, for instance, says, “Let’s count to 10 slowly and breathe…”

While 87 percent of the participants reported that the process helped make them more aware of their moods and eating triggers, only 37 percent reported that they changed their eating habits in any way, even during the short duration of the study. In other words, knowing that they were in a mood that might induce emotional eating did NOT typically stop the stuff-face response. The women also were asked for their recommendations for interventions that might work better. They suggested that they might succeed if given instructions to take walks, call friends, meditate, fill out gratitude questionnaires, read something funny, and so forth. The researchers concluded that providing women with individualized menus of options to choose from when stressed might work well.

There’s certainly some validity to the idea of catching the emotional eating impulse when it first arises and redirecting attention to something more constructive, especially from a natrual weight loss perspective. The point is, though, that even if the suggested exercises do actually help some women to forego the donut, what woman wants to walk around with lithium batteries on her bust, just to be told she’s suffering from stress and anxiety? For one thing, studies show that lithium-ion batteries have negative effects on both health and the environment. One recent study by Abt Associates found that exposure to the inner components of such batteries can cause respiratory, pulmonary and neurological problems, in addition to contributing to global warming and ecological toxicity.3 “Study: Lithium-Ion Batteries Can Impact Environment, Health Negatively.” 3 June 2013. Daily Tech. 5 November 2013. http://www.dailytech.com/Study+LithiumIon+Batteries+Can+Impact+Environment+Health+Negatively/article31678.htm

It also doesn’t help that the product still hasn’t resolved the problem of how to keep the batteries alive for more than a few hours at a stretch. The research report notes that, “It was very tedious for participants to wear our prototyped sensing system, as the boards had to be recharged every 3-4 hours, which resulted in participants having to finagle with their wardrobe throughout the day.” Just think, though: if Microsoft resolves the problem by adding more batteries to the bras, the bras could then double as padded bustline-enhancing wardrobe additions.

In spite of the battery-life challenges, Microsoft has not abandoned the idea of the smart-bra, by any means. Researchers continue to work to find a way to make the batteries last longer. Apparently, the company attempted a male version of the product, but it didn’t work because the monitors didn’t stay close enough to the man’s heart. And so, they’re simultaneously working on a “just-in time” wrist device that both men and women can wear.

By the way, Microsoft isn’t the first company to think of ways to implant electrodes into bras. Earlier this year, three Indian engineering students from SRM University in Chennai developed a bra that delivers a series of 3800k volt shocks (enough to cause severe burns), to anyone who gropes a woman without her consent. The bra, named ‘Society Harnessing Equipment’ by the developers, also has built-in GPS, and it alerts the local police station once activated. “4 “From ‘anti-rape’ bras to skirts that act as instant camouflage: The clothing women are using to protect against sexual assault.” 5 June 2013. Mail Online. 5 December 2013.  http://www.dailymail.co.uk/femail/article-2336407/From-anti-rape-bras-skirts-act-instant-camouflage-The-clothing-women-using-protect-sexual-assault.html ,5 Graham, Fiona. “Wearable technology: the bra designed to shock attackers.” 15 April 2013. BBC. 5 December. 2013. http://www.bbc.co.uk/news/business-22110443

Fortunately, neither Microsoft nor the Indian engineers had the inspiration to develop bras that shock women into better eating habits nor that provide GPS directions to the diet police.