Mental Health and the Great Outdoors 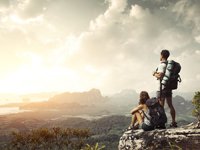 Making the transition back to civilian life after time spent on a tour of duty, or even just in the regimented military lifestyle, is not always smooth for many veterans.  As they readjust to spending time with family members and friends and try to reintegrate into the workforce, certain issues may come up.  Some must face rehabilitation and other kinds of recovery after injuries, and nearly 20 percent have to deal with post-traumatic stress disorder or major depression, among other psychological hurdles.1 “One In Five Iraq and Afghanistan Veterans Suffer from PTSD or Major Depression.” Rand. 17 April 2008. Accessed 1 August 2013. http://www.rand.org/news/press/2008/04/17.html   But new mental health articles provide a measure of hope for these veterans struggling with stress and anxiety in a somewhat unlikely place: the great outdoors.

The research, which was conducted through the University of Michigan School of Natural Resources and Environment in Ann Arbor, found that nature-based outings of several days in length provided the veterans with positive effects on their mental health that lasted well beyond the end of the trip.2 Nicholson, Debbie. “Being out in nature can have significant positive impact on veterans.” Examiner. 26 July 2013. Accessed 31 July 2013. http://www.examiner.com/article/being-out-nature-can-have-significant-positive-impact-on-veterans   The participants were 98 former military personnel between the ages of 30 and 49.  The group was predominantly male and mostly unemployed at the time of the study.  Nearly half of them had been out of the armed forces for less than five years, and almost all were within 10 years of discharge.  The subjects were asked to fill out a questionnaire initially to provide information about their backgrounds as well as medical and mental health histories.  There were 54 percent who said that they were regularly dealing with some sort of physical and/or psychological issue that was comprehensive enough to interfere with normal daily life.

A dozen different excursions were made available to the veterans, ranging in length from four to seven days.  These outings were designed specifically for the study by the Sierra Club in conjunction with four other nature-related organizations: Higher Ground, Wasatch Adaptive Sports, Wilderness Inquiry, and Women’s Wilderness Institute.  The expeditions were not mandatory; 73 percent of the veterans involved in the research partook.

Interviews were conducted a week prior to the outing, a week after the outing, and again approximately one month later.  The subjects were found to experience notable improvements in various areas of their mental health when surveyed one week following the excursion as compared to prior to attending, and these benefits remained with the veterans during the follow-up a month afterward.  There was also a positive trend in the participants’ ability to function socially and they noted a better attitude toward life.  Some of the most significant improvements were seen in those subjects who had been experiencing the most difficulties prior to the experiment.

What’s truly interesting is that the majority of these veterans were new to organized nature expedition trips, so it was not a matter of finding comfort in something they had loved to do in the past.  And perhaps tellingly, almost none of the outings in which they participated offered any type of mental health therapy.  The trips were simply based on getting out into nature and spending time with others going kayaking, whitewater rafting, paddling, backpacking, fly fishing, and the like.

Unfortunately, many of our former military personnel who experience psychological trauma after their service is done end up being prescribed drugs to counter their problems.  If symptoms are recurring or not responding to counseling, many doctors will suggest a selective serotonin reuptake inhibitor (SSRI) for depression or PTSD.3 “Depression, Trauma, and PTSD.” United States Department of Veterans Affairs. 1 January 2007. Accessed 1 August 2013. http://www.ptsd.va.gov/public/pages/depression-and-trauma.asp   While they may be effective for some people battling severe depression, numerous studies have found that they do little to alleviate symptoms in many others.  And 2012 research at Western University in Ontario, Canada, determined that SSRIs may increase the risk of stroke or brain hemorrhage4 Hackam, Daniel G. and Mrkobrada, Marko. “Selective serotonin reuptake inhibitors and brain hemorrhage.” Neurology. 17 October 2012. Accessed 1 August 2013. http://www.neurology.org/content/79/18/1862.short –not to mention the fact that they also increase the incidence of both suicide and violent behavior.

As an alternative, programs such as the nature trips used in the current research certainly deserve more attention as a possible method for helping those who are struggling with psychological issues.  Veterans are definitely a segment of the population that is known to have a hard re-entry period into daily life, but there are others who might very well benefit from getting away from it all for a few days as well.  Spending time focusing on essential teamwork, physical activity, and mental stimulation to achieve tasks and remind ourselves of our worth and value are worthwhile pursuits…and where better to do them than in the beauty and majesty of nature.