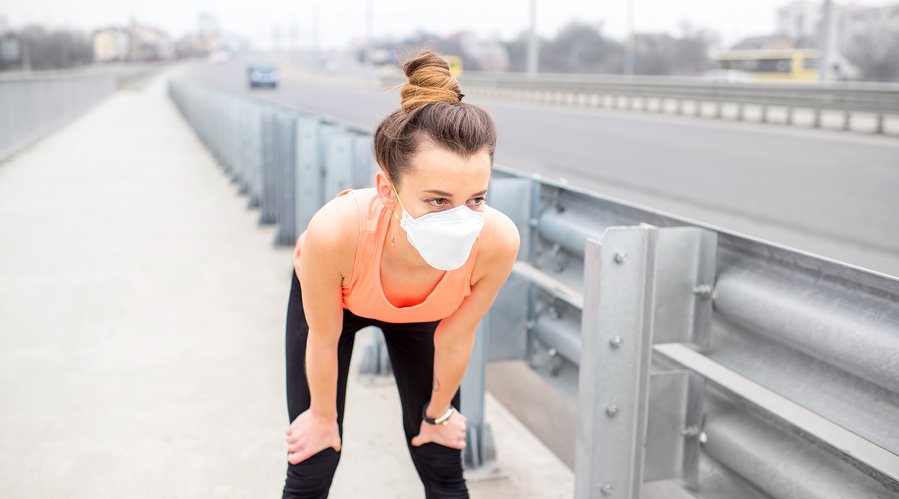 You’re trying to better yourself and live a healthier lifestyle, and that’s wonderful. Of course, you are smart enough to understand that you can’t go straight from being a couch potato to running marathons. It’s important to build up slowly so you don’t overdo it, injure yourself, or get so frustrated that you give up on exercise. With that in mind, for many people, walking is an ideal cardiovascular activity. It doesn’t require anything more than comfortable shoes, and you can do it while getting other things done such as running errands. But depending on where you live, you might want to consider some indoor alternatives because new research suggests that walking outdoors in certain places might actually be detrimental to your health.

The study, which was conducted at Imperial College London in the United Kingdom, found that for older people walking in areas with heavy air pollution may negate any benefits derived from the workout.1 Sinharay, Rudy; et al. “Respiratory and cardiovascular responses to walking down a traffic-polluted road compared with walking in a traffic-free area in participants aged 60 years and older with chronic lung or heart disease and age-matched healthy controls: a randomised, crossover study.” The Lancet. 5 December 2017. Accessed 13 December 2017. http://www.thelancet.com/journals/lancet/article/PIIS0140-6736(17)32643-0/fulltext. These findings are based on an experiment that involved 119 male and female London residents who were all at least 60 years old.

The subjects were selected in order to compare air pollution’s effect on various states of health. So, 40 of the participants were in overall good health, another 40 had been diagnosed with chronic obstructive pulmonary disease (COPD), and the remaining 39 had ischemic heart disease. None of the volunteers were smokers at the time of the investigation.

They were randomly divided into two groups. One group was instructed to walk outside for two hours through a busy, highly trafficked neighborhood, and the other group was instructed to do the same two-hour walk, but through a quiet area of a park. Several weeks later, the assignments were switched and the group previously walking through the trafficked area instead took a two-hour park walk and vice versa.

Both prior to and during each walk, the investigators obtained measurements of air pollutants typically produced by traffic, including ultrafine particles, black carbon, and nitrogen dioxide. In addition, they assessed the respiratory and cardiovascular function of each participant at various points during and after the walks.

The researchers discovered that after walking in a park setting, lung capacity was notably increased and arterial stiffness was decreased for up to 26 hours. A very different story, however, was found when the walks were taken on the city streets. Far fewer benefits were realized in the lungs when walking in proximity to traffic. Even worse, rather than decreasing stiffness in the arteries, these walks actually increased the stiffening. Stiffening of the arteries is associated with an elevated risk of heart attacks and stroke.

Not surprisingly, the participants who had preexisting health issues felt the negative effects of the pollution to a greater extent. Those with COPD tended to develop restrictions of the small airways in the lungs, resulting in wheezing, coughing, and shortness of breath. The volunteers with heart disease experienced more stiffening of their arteries, particularly when no medication was being taken to combat the problem.

These findings are somewhat limited by the small population sample included in the research. But they are in line with other findings related to the harmful health effects of pollution, including a 2008 study at the Harvard School of Public Health in Boston, Massachusetts that showed a strong link between air pollution and deep vein thrombosis, a potentially deadly type of blood clot.2 Baccarelli, Andrea; et al. “Exposure to Particulate Air Pollution and Risk of Deep Vein Thrombosis.” Archives of Internal Medicine. 12 May 2008. Accessed 14 December 2017. http://www.ncbi.nlm.nih.gov/pmc/articles/PMC3093962/.

Ultimately, it would probably be a smart choice to limit your outdoor exercise if you live in an area abundant with automobile traffic. The same also holds true for people residing in cities known to have poor air quality, such as Los Angeles or Pittsburgh in the U.S., and to a far greater extent, Beijing or Delhi internationally. And of course, if you’re living downwind from any of the California fires, you have air pollution on steroids. If you live in such a place, you would certainly need to check the air quality status before doing any outdoor activity.

For the rest of us, though, going outside for exercise is a great idea. A 2016 study at Brigham and Women’s Hospital in Boston, Massachusetts showed that spending time in greener environments may help increase longevity and boost mental health.3 James, Peter; et al. “Exposure to Greenness and Mortality in a Nationwide Prospective Cohort Study of Women.” Environmental Health Perspectives. September 2016. Accessed 14 December 2017. http://ehp.niehs.nih.gov/15-10363/. So if you’re lucky enough to have a park nearby, make it a regular destination for your walk, run, or bike ride and you’ll reap both physical and mental benefits.