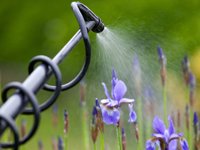 Pesticides have been widely used since the 1940s by farmers trying to protect their crops from devastation by insects of all kinds.  While it is certainly important to make sure there are plenty of vegetables, fruits, and grains grown to enable all of us to eat nutritious fare, applying pesticides to our food sources has been shown to be harmful in numerous ways.  And now, new research has found substantial links between the use of several pesticides and Parkinson’s disease.

The study, which took place at the University of California at Los Angeles, discovered not only the potential for pesticides to increase the risk of developing Parkinson’s but also how certain genetic influences may play a role in this process.1 Sifferlin, Alexandra. “The Pesticide on Your Fruit May Lead to Parkinson’s.” Time. 3 February 2014. Accessed 12 February 2014. http://healthland.time.com/2014/02/03/the-pesticide-on-your-fruit-may-lead-to-parkinsons   The subjects were 360 individuals diagnosed with Parkinson’s disease, all of whom were residing in one of three farming communities in California where pesticide use was common.  The control group was made up of 816 people living in the same area who were all free of Parkinson’s.

Earlier research has linked a particular pesticide, known as benomyl, with Parkinson’s disease as it was found to damage the dopaminergic neurons involved with such functions as voluntary movement.  Jon Barron has been reporting on the association between Parkinson’s and pesticides for years, including a 2008 study jointly conducted by teams from Duke University, the University of Miami, and the Parkinson’s Disease Research Center that found that long-term, repeated pesticide exposure increased the risk of developing Parkinson’s by 61 percent compared to relatives who had not been exposed.2 Hancock, Dana B.; et al. “Pesticide exposure and risk of Parkinson’s disease: A family-based case-control study.” BMC Neurology. 28 March 2008. Accessed 14 February 2014. http://www.biomedcentral.com/1471-2377/8/6

Now, the current study has expanded on our previous knowledge by testing numerous types of pesticides to determine whether they might have a similar effect to that of benomyl. The scientists discovered that there were 11 additional pesticides that appear to contribute to the development of Parkinson’s disease in the same way as benomyl.  They also did some delving into the genetic components of the condition. Those individuals with the gene variant ALDH2 faced six times the risk of being diagnosed with Parkinson’s after exposure to pesticides compared with those with other versions of the gene.  This kind of inherited susceptibility to a disease does not mean that everyone with the gene variant will develop the disease, but it generally increases the likelihood.  Other similar genetic predispositions are known to occur, for example in those with the BRCA1 or BRCA2 genes affecting breast and ovarian cancer risk. And again, here too, the genes by themselves, unless other risk factors are present, have only a moderate impact on the risk of cancer.

This study helps put together some of the pieces of the puzzle as to what genes may influence our vulnerability to Parkinson’s disease as well as what environmental factors are concurrently making an impact on our bodies that open the door to provide access to the disease.  The pesticides found to be linked to Parkinson’s all enter the brain and suppress the production of aldehyde dehydrogenase (ALDH). This is harmful because ALDH is responsible for balancing our levels of DOPAL, a toxin found in the brain.  As DOPAL levels increase, it destroys the neurons that produce dopamine, leading to the onset of Parkinson’s disease.  There is no cure for Parkinson’s, a progressive condition that affects movement and coordination and is often marked by severe tremors.

What is truly frightening about these findings is that it is very difficult to avoid exposure to pesticides.  Even those of us careful to only purchase organic, pesticide-free produce in the supermarket still eat some of our meals in restaurants. The bigger problem, though, as housing developments spread ever further out, they take over farm lands that often are saturated by years of pesticide use. And if you spend time outdoors in any of these areas, chances are you are inhaling pesticides and getting them all over your skin and clothes, not to mention tracking them into your house and onto your carpets.  Although benomyl has been banned for use in the United States, there are plenty of other pesticides regularly applied in parks, schoolyards, golf courses, and your neighbors’ lawns.  Not to mention the fact that they often find a way into our groundwater.

So how can we begin to protect ourselves and our loved ones from these hazardous chemicals?  There is no way to avoid them entirely, but start by sticking with organic produce only.  Don’t let a landscaper or exterminator spray any chemicals inside or outside your home.  Include a regular detox program into your health regimen to rid your body of any harmful toxins that do begin to accumulate. And finally, if you are experiencing Parkinson like tremors, or feel you are at risk of tremors by virtue of where you live, you might want to consider supplementing with a carnosine/acetyl-l-carnitine/dmae formula. It may help.