Death by Alcohol Abuse in US Increasing | Natural Health Blog 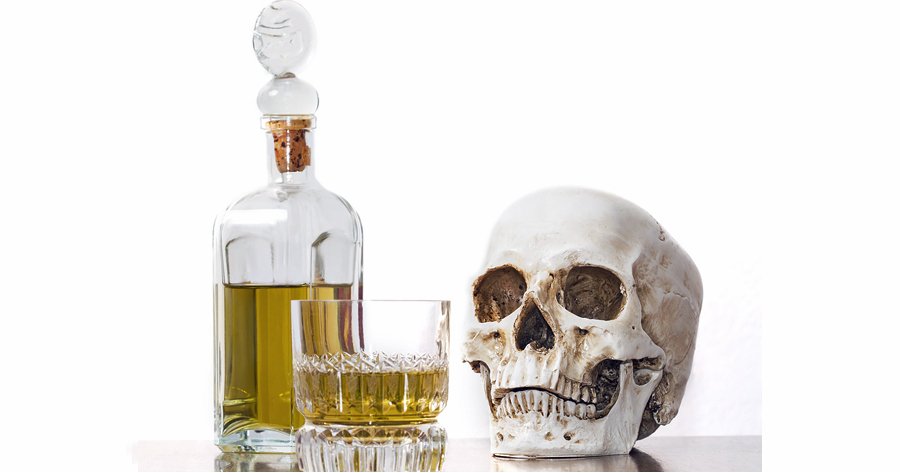 If you find yourself sitting around the dinner table sipping shiraz while discussing the worrisome rise in painkiller addiction seen nationwide (or perhaps within your own circle of friends), consider this: last year in the US, alcohol-related deaths outnumbered those from painkillers and heroin combined, and that’s without including deaths from accidents caused by drinking too much.1 Courtney, Ray. “Americans drinks to death.” 24 December 2015. Albany Daily Star. 24 December 2015. http://www.albanydailystar.com/health/americans-drinks-to-death-14714.html Also, the rise in deaths from alcohol poisoning has been steady and sharp, to the point that last year there were an unprecedented number of deaths from alcohol poisoning.

In 2014, illnesses and poisoning directly caused by alcohol killed 30,700 people in the US compared to 28,647 who died from opioid abuse.2 Ryan, Lisa. “Americans are DRINKING themselves to death: Alcohol poisoning deaths and cirrhosis deaths hit record high.” 23 December 2015. Daily Mail. 24 December 2015. http://www.dailymail.co.uk/health/article-3372615/Americans-DRINKING-death-Alcohol-poisoning-cirrhosis-deaths-hit-record-high.html The previous year, there were 29,001 deaths from alcohol. Compared to a mere 12 years ago, that’s a 37 percent rise.  To put the numbers in perspective, that’s 9.6 alcohol deaths in 2014 for every 100,000 people, or six deaths from alcohol poisoning alone (not counting cirrhosis) nationwide a day. Add in deaths from driving drunk and other types of alcohol-related accidents and the number of deaths climbs to upwards of 90,000 per year.3 Graham, Eleanor. “Excessive Alcohol Consumption Induced Deaths at Three-and-a-Half Decade High in America.” 24 December 2015. NYC News. 24 December 2015. http://nycnews.net/content/284150-excessive-alcohol-consumption-induced-deaths-three-and-half-decade-high-america And if you could calculate the number of cancer deaths and deaths from other illnesses either triggered or exacerbated by alcohol, that number would grow substantially.

Geography plays a surprisingly important role in the rate of alcohol poisoning deaths, with the states typically associated with diabetes and obesity having the lowest rates of alcohol fatalities. Go figure. For instance, in Alabama, only 5.3 alcohol deaths per million citizens were on the books, compared to Alaska, where the rate was nearly 10 times higher, at 46.5 deaths. The traditionally “healthy states” of Massachusetts and Rhode Island also came in at the top of the death charts, while other “unhealthy states” like Mississippi and Louisiana were among the lowest in terms of alcohol fatalities. Maybe weather has something to do with it–long dark winters keep people inside, depressed, near the liquor cabinet. The study authors thought the geographic differences might be due to the fact that people in rural areas don’t get to medical facilities fast enough if they get alcohol poisoning, but that theory doesn’t account for developed Massachusetts, or rural Alabama, for that matter. Then again, perhaps they just die from diabetes and obesity before the alcohol can kill them directly.

Internationally, the US has risen to the top of the death-by-alcohol nations, ranking seventh out of 172 countries, just behind Denmark, the Ukraine, and Russia.4 http://www.worldlifeexpectancy.com/cause-of-death/alco Again, nearly all the countries in the top 10 are in northern latitudes, topped by Estonia, with 22 out of 100,000 deaths by alcohol, compared to our 9.6 in the US. Throughout Asia and Africa, death by alcohol rates are low to nonexistent.

While most of the deaths were from liver disease caused by long-term alcohol abuse, a significant portion did come from alcohol poisoning related to binge drinking. The overwhelming majority of these deaths did not involve teens at frat parties, as one might think. Rather, 75 percent involved middle-aged men, particularly those aged 45 to 54.5 Leonard, Kimberly. “6 Americans Die Daily from Alcohol Poisoning.” US News and World Report. 24 December 2015. http://www.usnews.com/news/blogs/data-mine/2015/01/06/6-americans-die-every-day-from-alcohol-poisoning The statistics show that those working full-time indulged in considerably more binge drinking and heavy drinking than did their unemployed or half-time colleagues.

The Centers for Disease Control define binge drinking as consuming five or more alcoholic beverages in one night if you’re a man, or four drinks if you’re a woman. Heavy drinking–the type that can lead to liver disease–is defined as more than 15 drinks a week for a man, and only eight drinks for women. In other words, any woman who has a few glasses of wine with dinner on a nightly basis is a heavy drinker.

If it’s any consolation to those in the US, alcohol deaths around the globe also have spiked. In 2011, 2.5 million people worldwide died from alcohol disease, but by 2014, that number had skyrocketed to 3.3 million.6 Firger, Jessica. “Alcohol deaths on the rise worldwide.” 12 May 2014. CBS News . 24 December 2015. http://www.cbsnews.com/news/alcohol-deaths-on-the-rise-worldwide/ Most of the increase is due to a substantial drinking uptick in Southeast Asia and the Pacific.

According to a report from the World Health Organization, if you divided up worldwide alcohol consumption, it would work out to 6.2 liters of pure alcohol per person over the age of 15, but since lots of people don’t drink, those who do drink average 17 liters of pure alcohol a year. At least one expert says the rise in alcohol deaths is being caused by people crossing over from drug addiction.

And speaking of drug addiction, it’s not just alcohol-consumption that’s on the rise, but also, drug addiction and deaths from drugs–even though alcohol deaths exceed drug deaths. In fact, last year, deaths from drug overdose rose by 6.5 percent from the previous year, with 61 percent of those deaths attributable to prescription painkillers.

The real question, though, is why are we increasingly trying to numb ourselves, even to the point of death?

“They pick up where they left off in addiction,” says Patricia Allen, Nursing Director at Summit Behavioral Health in New York. “They are not going to start with a couple of drinks.”7 Cutler, Jacqueline. “More Americans drank themselves to death last year than in the past 35 years.” 24 December 2015. New York Daily News. 24 December 2015. http://www.nydailynews.com/life-style/health/americans-drinking-death-record-numbers-article-1.2476100

Ms. Allen misses the point that substance abuse is increasing on all fronts, and that abuse is becoming more dangerous and deadly by the month. At the same time, suicide rates are increasing.8 “Suicide rates rise, especially for one group.” 6 March 2015. CBS News. 24 December 2015. http://www.cbsnews.com/news/suicide-rates-rise-especially-for-one-group/ Again, it seems increasing numbers of us are seeking oblivion one way or another. Let’s hope that the next study doesn’t just report the depressing numbers, but instead reveals why we’re collectively spiraling into self-destruction and also, offers some way out of the hole we’re in.