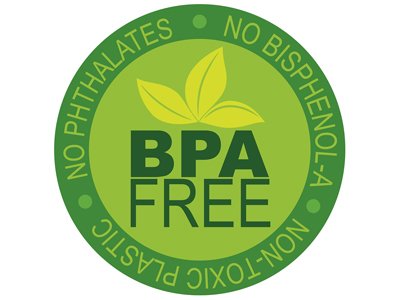 It’s been a few years since we’ve written about the devastation wrought by our favorite plastic to hate–bisphenol A (BPA)–but now the stuff is back in the news. It turns out that the supposedly “safer” alternatives to BPA share some unfortunate qualities with BPA itself, including a predilection for triggering brain damage.1 Healy, Melissa. “bpa and ‘bpa-free alternatives linked to fetal brain changes.” 12 January 2015. Los Angeles Times. 15 January 2015. http://www.latimes.com/science/sciencenow/la-sci-sn-fetal-exposure-bpa-brain-20150112-story.html In other words, “BPA-free” plastic may be just as bad as the original or even worse-and the original is mighty bad.

As we’ve written in the past, research shows that BPA plastic may be linked to breast and prostate cancers, early onset of female puberty, attention deficit disorder, infertility, heart disease, asthma, reproductive and neurological disorders, and erectile dysfunction. Studies also have shown that the plastic can affect brain structure in ways that potentially affect learning, memory, and mood. There have, in fact, been so many studies showing a clear correlation between BPA and damaging health effects that the news of the plastic’s dangers caused at least some consumers to seek alternatives.

The consumer desire for safer alternatives caused waves in the plastics industry, because, after all, over six billion pounds of BPA have been going to market each year, raking in huge profits for the manufacturers. BPA is used in a wide array of products, ranging from medical instruments to dental amalgams to canned food linings (in fact, most canned food comes in BPA-lined containers). BPA was even common in baby bottles and sippy cups until banned in favor of the “safe” BPA alternative. To this day, the FDA continues to endorse the use of BPA for coating the inside lining of food cans.

To deal with growing consumer concern about the dangers of BPA, someone in the plastics industry figured out that they could beat the competition by producing “BPA-free” products. Products started popping up on the shelves boasting that they contained no BPA plastic. A quick trip to the store reveals, for instance, that the Ninja super-blender has the words “BPA-Free” plastered on the front of the box, giving it marketing appeal over other blenders that make no such claims. Similarly, at the health food store, cans of soup announce they are BPA-free. The internet is rife with questions from consumers asking which products contain BPA plastic versus those that are BPA free. Clearly, there’s a market for safe plastic.

But now a new study from the University of Calgary in Canada shows that the BPA alternative–otherwise known as bisphenol-S (BPS)–certainly does not satisfy that need. In fact, the alternative might actually be even more harmful than regular old BPA. In animal tests, BPS caused abnormal growth surges in fetuses, and while BPA also triggered such surges, it did so to a lesser extent.

The study’s authors explain that these growth surges cause significant malfunction: “You have a bunch of cells in your brain and at some point they become neurons and they have to move to the right place to form the right circuitry,” they write. “If neurons are born too soon, they can move to the wrong place and can form the wrong circuits.”

The region of the brain affected by BPS exposure controls fear, impulse-control, anxiety, and early puberty, and also is connected to obesity and hyperactivity. The researchers drew their results after conducting tests on zebrafish embryos. While it’s true that zebrafish dwell quite a ways down on the food chain compared to us humans, zebrafish nevertheless share 80 percent of their genetic structure with humans. What’s bad for zebrafish may very well be bad for people. And clearly, the study found that BPS is very bad for the fish. Those exposed to low levels of BPS had anxiety reactions at three times the rate of non-exposed fish. They also had a 240 percent increase in neuron production in the hypothalamus, compared to “just” a 180% increase in fish exposed to BPA. Again, fish aren’t people, but the results do indicate a potential problem.

The “dose” of BPS the fish were exposed to was very minimal.2 Graveland, Bill. “BPA free? Plastic alternative BPS may not be any safer, after all.” 12 January 2015. CTV News. 15 January 2015. http://www.ctvnews.ca/health/bpa-free-plastic-alternative-bps-may-not-be-safer-after-all-1.2184973 Study director Deborah Kurrasch says, “I was actually very surprised at our results. This was a very, very, very low dose, so I didn’t think using a dose this low could have any effect.” She notes that she chose an exposure level that would equate to the amount of BPA and BPS that humans normally get in their drinking water.

Interestingly, the brain changes were especially pronounced in male embryos. Given that hyperactivity was one of the most pronounced effects observed, the scientists postulate that there may be some link between BPS and higher rates of hyperactivity and neurodevelopmental disorders such as autism in males than in females.

“We know there’s a fourfold increase in autism between boys and girls,” the authors write. “There are lots of possible explanations for that, but it is interesting to speculate since we do know small changes in hormone levels prenatally can have consequences on brain development.”

In a horrifying statement published in the Proceedings of the National Academy of Sciences, study lead author Deborah Kurrasch says, “A lot of the alternative chemicals have not been adequately tested because they don’t have to be. A compound is considered safe (by the Food and Drug Administration) until proven otherwise.”3 Nutt, Amy Ellis. “BPA alternative disrupts normal brain cell growth, is tied to hyperactivity study says.” 12 January 2015. Washington Post. 15 January 2015. http://www.washingtonpost.com/national/health-science/bpa-alternative-disrupts-normal-brain-cell-growth-is-tied-to-hyperactivity-study-says/2015/01/12/a9ecc37e-9a7e-11e4-a7ee-526210d665b4_story.html The study’s authors suggest that no plastic alternative is safe if it shares any structural similarity to BPA.

As could be predicted, the plastic industry denied the validity of the study. According to Steven G. Hentges of the Polycarbonate/BPA Global Group, whose comments actually sidestep the BPS issue, “…humans are exposed to only trace levels of BPA through the diet, and it is well known that humans efficiently convert BPA to a substance with no known biological activity and quickly eliminate it from the body. Although the authors attribute great significance to their results, it would not be scientifically appropriate to draw any conclusions about human health based on this limited experiment.”

Unfortunately, BPS is almost as ubiquitous as BPA. Not only is it touted as a safe plastic alternative in scores of products, it’s also used as a coating material in sales receipts and recycled paper. Even more unfortunately, if you live on planet earth, it’s quite difficult to avoid exposure to these plastics at this point. To minimize your contact, use glass instead of plastic of any sort whenever possible, buy fresh food instead of canned, and try not to handle your sales receipts.