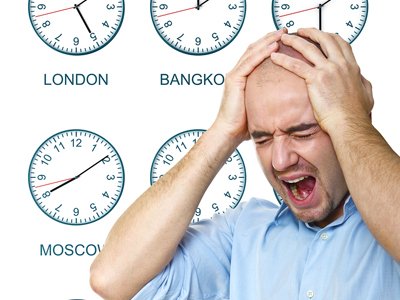 Few things beat taking a trip to a faraway land to gain new perspective. Unfortunately, although traveling may reset the emotional clock, it simultaneously scrambles the internal physical clock. This causes jet lag, which can ruin days or even weeks of vacation time and can make readjustment back home a nightmare.

Rather, it’s a disorder (yes, there’s a diagnostic category for “jet lag disorder”) caused because your circadian rhythms are thrown off when you move from one time zone to another.2 “Jet Lag Disorder.” Mayo Clinic. 25 August 2014. http://www.mayoclinic.org/diseases-conditions/jet-lag/basics/definition/con-20032662 Your body reacts to the fact that it’s dark outside when it “should be” daylight, or that the sun is shining at a time when you would be counting z’s at home. The result is that even though you’re exhausted, you may have trouble sleeping in the new location, you may have gastrointestinal problems and muscle aches, you may become irritable and moody, or you may feel completely spent during the day. The more time zones you’ve gone through, the more pronounced the effects. Experts estimate that for every time zone you cross, you’ll need up to a day to recuperate, so those traveling from, say, California to France, could need nine days before feeling chipper again.3 http://www.timeanddate.com/worldclock/difference.html?p1=224

Most people just cope with the exhaustion, taking it in stride as an unfortunate by-product of the journey. According to research, though, the worst impacts of jet lag may be avoided or at least ameliorated by a series of smart strategies and new products. Jet lag results in a lot of time lost for pleasure travelers, and it also can curtail the productivity of business travelers, and so it’s no surprise that lately there’s been some significant funding behind efforts to find a cure. Most recently, researchers from Oxford University teamed up with the drug company F. Hoffman La Roche in hopes of coming up with a pharmaceutical intervention.4 Jet lag study reveals why time changes are a struggle.”30 August 2013. University of Oxford. 25 August 2014. http://www.ox.ac.uk/media/news_stories/2013/130830.html

In teasing apart the mechanics of jet lag, the researchers discovered that a gene that typically causes the body to resist reacting to changes in light and dark may be responsible. This gene, when doing its job under normal conditions, prevents us from falling asleep if we walk into a dark room during the day. It also prevents us from getting wired if someone turns on a light at bedtime. Unfortunately, though, it also works against us by keeping us from adapting to the changes in light whenever our circadian rhythms get scrambled, as when we cross time zones. The scientists found when they blocked the gene in mice who had been exposed to light during their normal sleep hours, sure enough, the little rodents bounced back fast.

Based on these findings, the researchers promise that drug interventions are on the way. We’re still several years away from a cure for jet-lag,” said chief researcher Dr. Stuart Peirson of Oxford University, “but understanding the mechanisms that generate and regulate our circadian clock gives us targets to develop drugs to help bring our bodies in tune with the solar cycle.”

If you aren’t pharmaceutically inclined, another new solution just introduced is a free smartphone app called “Entrain.”5 http://entrain.math.lsa.umich.edu/#faq According to the webpage promoting the app, “Entrain … connects users to lighting schedules developed by researchers at the University of Michigan. These schedules are mathematically proven to adjust you to new time zones as quickly as possible. Light is the primary driving input to the circadian clock, and by recording your lighting history, we can simulate your body’s clock and make recommendations for behavior.”

The app works by asking a series of questions to track where you’re headed, what your schedule for changing locales will be, how much light you’re actually getting, and how your jetlag already is manifesting. Based on what you input, you’ll get a schedule that tells you what times of day and night to expose yourself to darkness, to low light, and to bright light. Your particular recommendations may have you waking up to expose yourself to bright light at three in the morning, or may suggest that you go into darkness for a few hours during the day. The idea is that by manually shifting your light exposure, you give your body the needed messages to recalibrate Circadian rhythms and catch up quickly. Of course, many of us would find waking in the middle of the night to get blasted with light or staying in darkness on a beautiful afternoon rather distasteful-even distasteful enough to choose jet lag instead.

In any event, right now, Entrain is only available to iPhone and Apple users. The developers are currently collecting feedback to tweak the app before releasing it to Android. There haven’t been any clinical studies yet to test whether Entrain does what it’s supposed to do, but the developers relied on 80 pages of math to come up with the product and they insist it should work.  User reviews refer to some bugs in the program, but comments on the latest versions indicate that the program does reduce jet lag for many.6 http://itunes.apple.com/us/app/entrain/id844197986

Yet another solution you can consider is the equally inconvenient “jet lag diet.”7 Brody, Jane. “The Jet-Lag Diet.” 22 May 1983. The New York Times. 25 August 2014. http://www.nytimes.com/1983/05/22/travel/the-jet-lag-diet.html Developed by Dr. Charles Ehret of Chicago’s Argonne National Laboratory in the early 1980’s, the diet tricks the body into shifting its natural rhythms by skewing normal eating patterns. You alternate feasting with fasting, high-protein intake with no protein/high-carbohydrate intake, and if you’re going to drink coffee, you do it at the wrong time of day. The diet starts four days before you leave on your long trip, with the first day being one where you have a high protein breakfast and lunch, and then end the day with a high-carb, low-protein dinner. You can have coffee between 3:00 and 5:00 pm, but no alcohol throughout this regimen. The next day, you fast on light salads, fruits, and thin soups, keeping portions small and abstaining from caffeine. The third day you replay day one, and on the last day, you fast again, but this time you can have caffeine between 6:00 and 11:00 pm. At breakfast time on arrival day, you eat lots of protein and stay awake, eating regular meals until bedtime in your destination.

There’s a lot of evidence that the diet helps, and in fact, it’s been widely used by the US military for decades now. A study published in Military Medicine in 2002 found that those following the diet were 7.5 times less likely than a control group to suffer jet lag after flying from the United States to Korea, and returning in the opposite direction, the diet reduced jet lag by 16.2 times.8 Hendricks, Steve. “The Empty Stomach. Fasting to Beat Jet Lag.” 5 March 2012. Harpers. 25 August 2014. http://harpers.org/blog/2012/03/the-empty-stomach-fasting-to-beat-jet-lag/

Some find the four-day regimen too taxing, and so in the past few years, a team of Harvard researchers came up with a similar, but simpler remedy. Their solution suggests that you simply fast for 12 to 16 hours before arrival at the destination, and once there, you have a big breakfast. The researchers say you should have results equal to those achieved with the Argonne Diet. Although this newer regimen hasn’t been clinically tested yet, anecdotal evidence suggests it works.

For those who want the vacation party to start as soon as the plane boards and so refuse to fast, there are a few other possible interventions. The homeopathic remedy, “No Jet Lag,” gets excellent user reviews. Also, some say taking 3 mg of melatonin does the trick for them. Certainly either of these “pop a pill” approaches will be gentler than the pharmaceutical cures the scientists are currently brewing.

The point is, there’s plenty you can do to ameliorate jet lag. And that said, all the experts agree that you should avoid alcohol for a few days before arrival. All agree that you should eat well and lightly. Most suggest setting your watch for the time in your destination as soon as you leave home and waking up 15 minutes earlier each day before your trip (or 15 minutes later if you’re headed east). Finally, they say, you should try to stay awake upon arrival and adjust your eating and activity schedule to the local one right away.

Gallery image with caption: Lack of Sleep and Loneliness

Gallery image with caption: Ditch Your Alarm Clock on the Weekends