Doing Dishes May Be Good For Your Love Life 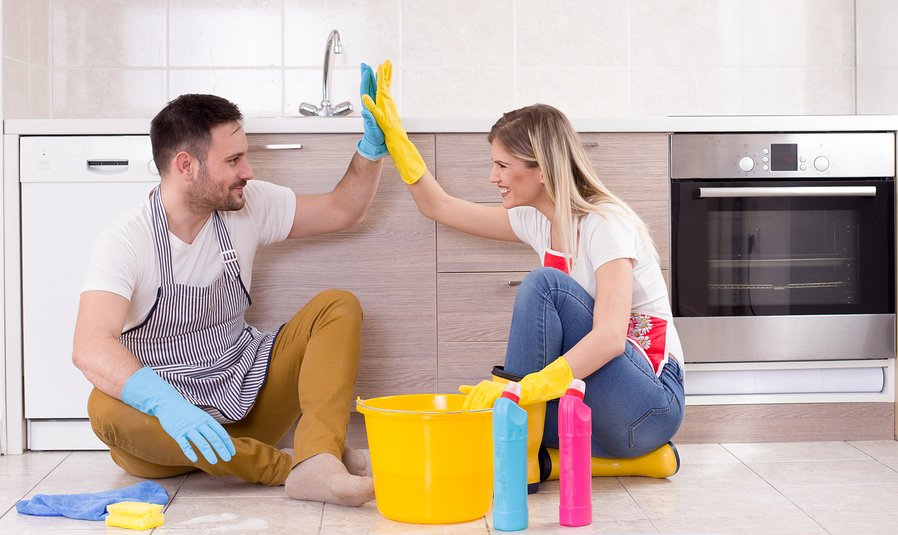 When you think of ways to boost the passion in your relationship, your ideas might include a romantic dinner for two, a weekend getaway to a bed-and-breakfast, or an offer of a massage. Chances are pretty good, though, that something that would never cross your mind is to propose taking on some household chores. After all, what sounds sexier: “I want to hold you in my arms for a slow dance,” or “I’m going to go wash those dirty dishes in the sink”? If you’re a man it might seem obvious to choose the former, but surprise, guys, recent research suggests that the latter statement is actually much more appealing to most women.

The study, which was conducted at the University of Utah in Salt Lake City, found that women involved with men who take on certain household chores have happier relationships and better sex lives.1 Carlson, Daniel L.; et al. “Stalled for Whom? Change in the Division of Particular Housework Tasks and Their Consequences for Middle- to Low-Income Couples.” Socius: Sociological Research for a Dynamic World. 6 April 2018. Accessed 22 April 2018. http://journals.sagepub.com/doi/full/10.1177/2378023118765867. These results are based on responses to a marital and relationship survey that included 487 couples across the United States who were married or living together. Both partners were asked to provide ratings for a number of intimate areas, including sexual frequency, sexual satisfaction, and relationship satisfaction.

The questions also delved into day-to-day household operations. Out of a selection of chores such as grocery shopping, laundry, dishwashing, and housecleaning, the subjects reported which ones they were responsible for and which were performed by their significant other. When women were doing most of the household work on their own, they were much more likely to rate their relationship as having more conflict, being less satisfactory, and featuring a poorer sex life compared to their peers whose husbands pitched in around the house. Interestingly, certain tasks seem to affect the women’s perception of their union more than others. The worst offense was not doing the dishes.

Why might dirty dishes set a woman off more than, say, a hamper filled to the brim or an unmopped floor? It could have to do with the timing of this particular chore. Think about when your kitchen is typically at its messiest. It’s probably right after dinner, when you’re tired after a day of work and coming home to cook, which results in assorted dirty pots and pans on top of the glasses, dishes, and cutlery. And since most of us tend to have more time and desire for amorous pursuits at night, it’s not difficult to see how a sink full of dirty dishes and no offer of help to tackle them could ruin the mood pretty quickly—as well as severely cutting into any available time.

The outcome of this study correlates with previous research findings, such as a 2007 study at American University of Beirut in Lebanon, which showed that women who do most of the chores around the house are considerably less happy than their counterparts whose partners share in these tasks.2 Khawaja, Marwan and Habib, Rima R. “Husbands’ Involvement in Housework and Women’s Psychosocial Health: Findings From a Population-Based Study in Lebanon.” American Journal of Public Health. May 2007. Accessed 23 April 2018. http://www.ncbi.nlm.nih.gov/pmc/articles/PMC1854869/. That is likely because feeling as if the chores are your sole responsibility—in addition to work, child rearing, errands, and everything else on your plate—can produce quite a bit of stress. And we know that stress has a wide variety of negative effects throughout the body, one of which is dampening the sex drive.

So, for the sake of your own happiness as well as the long-term health of your relationship, it would be wise to address this issue with your mate right away. And while it might be tempting to pick a fight over your partner’s lack of help in this area to vent some of your frustration, that’s just not productive. You’re better off communicating about it when you’re not feeling annoyed, and letting him know that it’s a big deal to you to split the household chores more equitably.

Everything doesn’t have to be divided up 50-50, but you should talk it through and come up with a plan together that feels fair to both of you. Maybe you each take responsibility for the tasks that you prefer to do, so if your partner doesn’t mind taking the garbage out and you do, that becomes his job. Or try doing certain chores together to make it a little more enjoyable, as in he vacuums a room while you dust. Ultimately, it’s just about figuring out what works for both of you as a couple so that even if the dirty dishes aren’t on his to-do list, they won’t be a source of friction in your relationship anymore. And for you guys who think doing chores is “unmanly,” you might want to take note of the fact that one time “sexiest man alive,” Hugh Jackman, splits household chores with his wife.3 “HUGH: I still do chores.” Daily Record. 10 Dec 2012. (Accessed 23 Apr 2018.) http://www.dailyrecord.co.uk/news/uk-world-news/hugh-i-still-do-chores-1021746 So, there goes that excuse!