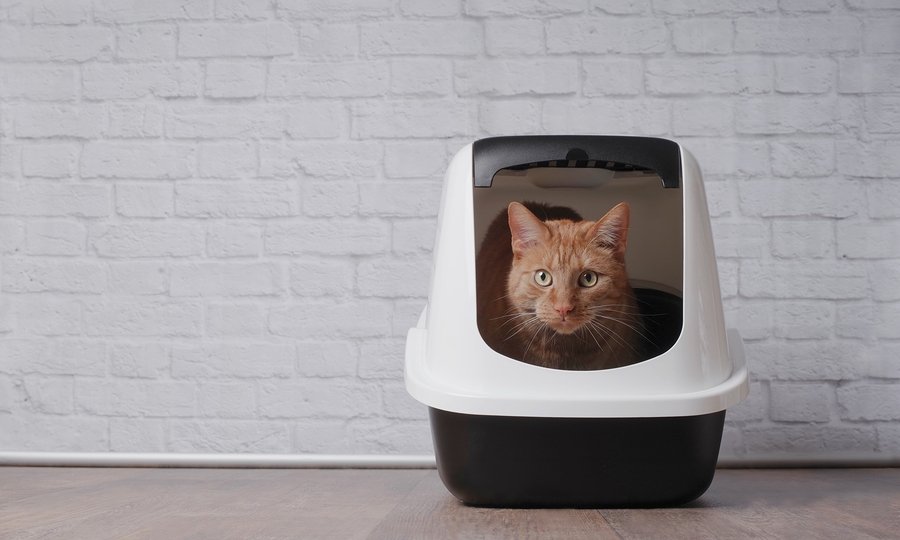 Last year, we decided that our outdoor cat needed to come indoors for good, and I was concerned. She had spent the previous six years of her life doing all her business in the nearby fields and woods, and I couldn’t imagine that she’d ever use a litter box.  It seemed laughable to hope that she’d switch right over to a tiny bin filled with sandy stuff. But to our amazement, Cali took to the litter box on day one.

Once I got over my pride in Cali’s remarkable litter-box achievements, I started to notice that the litter was so dusty that clouds formed in the air whenever I scooped it. It was impossible not to inhale a little. I started to worry about the litter itself. Was it safe for the cat to use? For us to be breathing in? For our other pets?

If you have a cat and you’ve ever visited a pet store, you certainly know there are many types of kitty litter, all making great claims about odor reduction and cat appeal. You’ll find litters made of clay, silica crystals, recycled paper, corn, wheat, and pine and various combinations of these elements. There are litters with added deodorant and scents, and clumping litters. If you’ve never had a cat and haven’t a clue, litter is basically a substance you add to a plastic bin to create a “cat toilet.” Litter needs to be scooped periodically with a slotted spoon to remove solid cat waste and changed completely every week or so to replace urine-contaminated material.

The oldest, cheapest, and most popular variety of litter is “clay.”1 Laron, Carl. “Best Clumping Cat Litter.” 14 February 2018. Consumer Search.  13 November 2018. http://www.consumersearch.com/cat-litter/best-clumping-cat-litter Clay is also popular with cats according to a study done by Dr. Peter Borchelt back in 1990.2 “Which Cat Litter is Best for Your Pet?” 19 November 2014. Four-Legged Guru. 14 November 2018. http://fourleggedguru.com/best-cat-litter/ Dr. Borchelt compared 14 different types of commercial cat litter and found that cats preferred fine-grained clumping clay to all other types of litter, including larger grained clay, two to one. Ironically, clay litter isn’t actually clay at all, but rather a natural substance called “Fuller’s earth” which looks like clay but in reality is an absorbent form of aluminum silicate. 3http://www.wisegeek.com/what-is-fullers-earth.htm The main active ingredient in Fuller’s earth is calcium bentonite. Fuller’s earth primarily is sourced in the US, Japan, Mexico, and England and has many industrial uses as a cleaning and refining agent. It’s also used as an additive to cosmetics to help absorb skin oils. What makes Fuller’s earth useful is that it can absorb its own weight in liquids, so it’s great for mopping up messes. The problem is that after a few days in the litter box the “clay” reaches its absorption capacity and urine can start to pool in the bottom of the box, so the litter will need changing and the box scrubbing out at least twice a week. For that reason, some clay litters also contain silica particles to boost absorbency.

“Clumping” clay, on the other hand, is a completely different product containing sodium bentonite, an aluminum phyllosilicate clay that boosts absorbency and allows particles to swell up to 15 times their original size when wet.4 What are the Most Eco-Friendly Cat Litter Products on the Market?” Scientific American. 13 November 2018. http://www.scientificamerican.com/article/green-friendly-cat-litter-options/ The result is that the litter forms hard balls upon contact with urine. That allows you to locate waste matter in the litter box and scoop it out easily.

Given that the main purpose of litter is to keep mess and odor to a minimum, the clumping provides a huge advantage. When cat owners use clumping clay litter and scoop the litter box several times a day, there may be no odor at all and the contents of the box may need changing only every few weeks.

Fuller’s earth, or non-clumping clay litter, for the most part is benign, although it’s probably best not to inhale large amounts of it.5 Dr. Weill. “Can Fuller’s Earth be Dangerous?” 5 April 2002. Dr. Andrew Weill. 15 November 2018. http://www.drweil.com/health-wellness/balanced-living/healthy-living/can-fullers-earth-be-dangerous/ Some cats are allergic to it, although that’s rare. Also, as mentioned earlier, some clay litters contain silica, which is a known carcinogen, plus it can cause silicosis, a potentially fatal lung disease sometimes affecting miners.6 Simon, Katie Machol. “Is your cat litter making you (and your cat) sick?” 11 May 2011. Creative Loafing. 15 November 2018. http://www.cltampa.com/news-views/environment/article/20744756/is-your-cat-litter-making-you-and-your-cat-sick This means that silica-gel crystal cat litters are a risky choice, even if they claim to be low-dust.

Clumping clay, on the other hand, poses a risk if ingested, since it can expand in the cat’s intestines to a dangerous degree.7 “What are the Most Eco-Friendly Cat Litter Products on the Market?” Scientific American. 15 November 2018. http://www.scientificamerican.com/article/green-friendly-cat-litter-options/ While most adults cats won’t choose to snack on kitty litter, young kittens will eat anything in sight and older cats can inadvertently swallow it when grooming themselves if the litter has stuck to their paws. Plus, dogs have been known to raid kitty litter boxes looking for a snack (yuck).8 Hurley, Terry. “Critical Cat Litter Safety Concerns.” Love to Know. 15 November 2018. http://cats.lovetoknow.com/Safe_Cat_Litter The other worry about clumping clay is that it can be quite dusty, and some worry that even breathing in the dust can be a health threat to cats as the dust coats their insides, causing dehydration and making nutrient absorption difficult.9 “Cat Litter Safety.” Pet Planet Health. 15 November 2018. http://www.petplanethealth.com/education/cat-litter-safety/ It can also threaten the humans who clean and scoop kitty litter.  There haven’t been any studies to date investigating the risks of clumping clay, but anecdotal reports support the ingestion and inhalation concerns. Some say the dust can cause diarrhea, vomiting, respiratory and kidney problems. And if you care about such things, the clay used in litter often comes from strip mining and is not biodegradable.

On the other hand, if your cat loves clumping clay and you love the convenience and low cost, you at least can opt for a low-dust variety. Consumer Search recommends Dr. Elsey’s Ultra Clumping Litter as a good choice. It’s medium grained and ostensibly low dust, and it’s only $17.49 for a 40-pound bag on Amazon as of this writing.

Among other available litters, safer choices include:

Feline Pine, which is made from recycled lumber scraps that are heat-treated to remove toxins, oils, and allergens. There’s both a clumping and non-clumping variety, and both have a natural pine scent to control odor. The clumping variety uses guar gum rather than sodium bentonite, but like sodium bentonite, it can swell up to many times its original size and so isn’t entirely safe if ingested or inhaled in large quantities.10 “Is Guar Gum Healthy or Unhealthy?” Healthline. 15 November 2018. http://www.healthline.com/nutrition/guar-gum On the other hand, small doses may be useful in promoting digestive health and maintaining healthy blood sugar and cholesterol levels. Cats generally like this litter, and it is biodegradable.

There’s also litter made of recycled newspaper. This type of litter is more absorbent than clay, non-toxic and very low dust. All good things except for the fact that cats don’t like it as much as clay. Other good options include wheat-based litter, corn-based litter, and litter made from grass or other botanical products. Again, just be careful to avoid added scents, chemicals, dyes, and deodorizers. You might have to do some careful digging to get a list of ingredients.

There’s one more essential consideration to ensure the safe use of kitty litter. You need to change it often enough to avoid getting sick from it or letting it sicken your cat. Cats hate dirty litter and would rather hold it in than go in a stinky box. Cats who chronically delay urinating can get urinary tract, bladder, or kidney infections as a result. Also, dirty litter produces ammonia fumes (that’s what makes it smelly), and these fumes can make humans queasy and cause headaches or even respiratory disease. Plus, the longer you delay cleaning the box, the greater opportunity there is for bacterial infections to breed and for parasites to multiply.

The bottom line is you need to find a safe litter that your pet will actually use, and cats can be picky. When transitioning to a new type of litter, it might help to mix some of the old litter in at first, and you can also add dirt and leaves from outside to the box. Once you’ve matched your cat to litter, clean the box often and wear a mask when changing the litter if it kicks up too much dust.

And remember, as the English writer Terry Pratchett said, “In ancient times, cats were worshipped as gods; they have not forgotten this.”