Reaping the Benefits of Organics 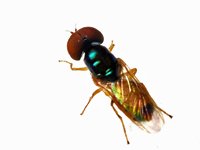 There has been much discussion in the media through the years about whether organic produce is truly better for us than the same foods conventionally grown.  Organics fans point to evidence that it is more nutritious, while those opposed insist that organic food is more expensive without any obvious health advantages.  But now, new research may shed some positive light on the virtues of organically raised fare, and if not ending the debate, at least giving the naysayers some serious food for thought.

The study, which took place at Southern Methodist University in Dallas, Texas, found that organic foods offered improved health outcomes in almost every aspect in which they were analyzed when compared to conventional foods…at least for fruit flies.1 Parker-Pope, Tara. “Is Organic Better? Ask a Fruit Fly.” New York Times. 17 April 2013. Accessed 22 April 2013. http://well.blogs.nytimes.com/2013/04/17/is-organic-better-ask-a-fruit-fly   This laboratory experiment made use of fruit flies, a common subject in trials, because they have a relatively short life span and it is therefore simpler to assess many of their biological functions.  The fruit flies were split into two groups.  One group was fed a diet of only organically grown bananas and potatoes, while the second group was fed the same type of produce grown conventionally.

The food was not analyzed for its nutritional content, as is typical of most studies comparing organic and conventional foods. Instead, the fruit flies were tested in a number of health related outcomes, and those fed organically came out ahead in just about every category when compared to the group that ate standard produce.  The scientists analyzed the two groups for fertility, stress resistance, resilience to starvation, and length of lifespan and found the organic food eaters fared consistently better than those munching on conventionally grown fruit.

Interestingly, when the fruit fly lab subjects were split into groups and fed either organic or conventional raisins, the same results were not found.  The health outcomes were not significantly better for the fruit flies eating organic raisins over conventional, and in some of the factors considered, they actually were worse.  But that was the only food tested that did not show a definitive, measurable improvement for those flies eating organic food, and it certainly bears further research to determine whether this was an anomaly.

This research is clearly just the tip of the iceberg when considering the relative merits and benefits of eating organically grown foods.  The results will need to be replicated and other animal and human subjects eventually tested.  And future trials could be helpful in determining exactly why the outcomes were so heavily in favor of organic bananas and potatoes.  It is possible that the traces of pesticides and fungicides left behind on conventionally grown foods were harmful, so the fruit flies who weren’t consuming any of that performed better on many measures of health.  Since pesticides and fungicides are designed to be poisonous to various bugs, these chemicals are still very hazardous in larger life forms.  They accumulate through repeated exposure within the digestive system, where they remain and do damage over time.  Numerous studies have found links between pesticides and a range of diseases, including cancer, birth defects, nervous system disorders, and more.2 Jakuboski, Samantha. “The Dangers of Pesticides.” Nature. 25 July 2011. Accessed 23 April 2013. http://www.nature.com/scitable/blog/green-science/the_dangers_of_pesticides   Therefore, it certainly makes sense that they could have an adverse effect on such factors as fertility and longevity in fruit flies. And it should be noted that their impact would likely be more significant in tiny fruit flies than in much larger humans. But again, humans live far longer, so there is more time for cumulative impact.

Another possibility that would account for greater health in the fruit flies eating organic food is that organic produce contains a greater amount of nutrients than the same foods conventionally grown.  After all, 2010 research at the University of Georgia in Athens analyzed 29 separate studies and found that organically grown fruits contain higher levels of antioxidants than those that are conventionally grown.3 Newberry, Liberty S. “Differences in Antioxidants and Polyphenolic Compounds Among Organically Grown and Conventionally Grown Fruits and Vegetables.” University of Georgia. Accessed 23 April 2013. http://organic.uga.edu/StudentResearchPapers/Newberry.pdf   Maybe the organic produce contained some significant combination of antioxidants that is not easily quantified.  A 2010 study at Washington State University in Pullman found that organic strawberries had a longer shelf life as well as higher antioxidant activity and concentrations of ascorbic acid and phenolic compounds when compared with conventionally grown strawberries.4 Kaplan, Karen. “Organic strawberries are better–in some ways–researchers say.” Los Angeles Times. 2 September 2010. Accessed 23 April 2013. http://www.latimes.com/health/la-sci-organic-strawberries-20100902,0,1376399.story

There is a vast body of evidence that organic foods are more beneficial to the body than the same foods grown conventionally.  However, it’s up to you as the consumer to do your research and read your labels.  In the United States, the use of the word organic on products is not tightly regulated, so some foods that say organic may be produced by a large corporation with an eye on the bottom line rather than looking for the best ways to grow healthy, natural foods.  Locally grown produce is best when you can find it since nothing needs to be transported for thousands of miles, and you will get seasonally ripe, delicious foods and support a small farmer to boot. And keep in mind, as we’ve discussed before, that just because something is labeled organic doesn’t necessarily mean it actually is organic.