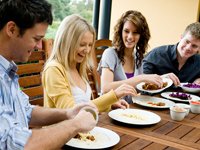 The old saying “you are what you eat” may very well hold true.  But it seems as if what we eat may very well depend on the company we keep.  According to a new study, our food selections tend to be much healthier when we are dining out with a friend who is conscientious about eating lower calorie meals, signifying a whole new approach to natural weight loss.

The research, which was a joint effort between scientists at the University of Illinois at Urbana-Champaign and Oklahoma State University in Stillwater, found that the choices we make at a meal may be much more highly influenced by the choices of our dining companions than we realize1 Sifferlin, Alexandra. “Want to Eat Healthier? Bring a Healthy Friend to Dinner.” Time. 24 October 2013.  Accessed 31 October 2013. http://healthland.time.com/2013/10/24/want-to-eat-healthier-bring-a-healthy-friend-to-dinner   The experiment took place at a restaurant in Stillwater, Oklahoma, over the course of three months in 2010.  The restaurant agreed to offer three different menus to customers, depending on what group those patrons were assigned to by the scientists.

One group was selected as the controls, and they were provided with the restaurant’s standard menu that listed each food item and its price.  A second group was provided with menus that listed a calorie count alongside each menu item.  Finally, a third group was provided with menus that listed not only a calorie count, but also a traffic light icon next to each menu item.  The traffic light was colored green to indicate that the item was 400 or fewer calories, yellow if it fell between 401 and 800 calories, and red if the dish was more than 800 calories.

Based on an examination of the subjects’ lunch receipts and interviews conducted with the members of the serving staff, the researchers were able to determine the influence the companions asserted on a diner.  The results showed that the participants who were in the third group using the menus with the traffic lights and were also dining as part of a larger party generally made the healthiest food selections.  It appears that it may be somewhat of a domino effect, in which one patron after another ordered a low calorie food as the waiter or waitress went around the table, with no one wanting to be the unhealthy odd man out.  If only all peer pressure were this positive!

The researchers broke down the menu items by their popularity, then used a model to help analyze how happy each customer felt with their order.  They found a number of predictable factors that helped determine satisfaction level, including the calorie count and price of the item.  However, another factor that was more surprising was the influence of their companions’ selections.  Those diners who were feeling some dissatisfaction over ordering a particular dish became much more content if others in their party followed suit by choosing something similar from the menu.

However, the scientists did point out that this influence of your tablemates can go both ways.  That is, if your friends choose big, greasy bacon double cheeseburgers with sides of fries, you may very well feel more comfortable selecting a higher calorie, less healthy item than if you had eaten without them.  But the traffic light reminders suggesting you at least stop and think before you order something majorly high in calories may help.  It’s not that different from a method used in a study at Texas Christian University in Fort Worth earlier in 2013.  Those researchers found that subjects who ordered off of menus that indicated the amount of walking that would be required to burn the calories in a dish chose more wisely than did their peers armed only with a calorie listing.2 James, Ashlei; et al. “The Effect of Menu Labels, Displaying Minutes of Brisk Walking Needed to Burn Food Calories, on Calories Ordered and Consumed in Young Adults.” The FASEB Journal. April 2013. Accessed 1 November 2013. http://www.fasebj.org/cgi/content/meeting_abstract/27/1_MeetingAbstracts/367.2

While this is all some interesting food for thought (literally), you have to hope that eventually most of us will order something we find appealing–and let’s hope, healthy–rather than mimic the choices of those dining with us.  It is always nice to fit in, but a little independence is good too, especially for those of us who try to stick to a balanced diet that keeps calories, fats, and sugars in check.  Obviously there are going to be times when you are eating in a group situation where there may be some peer pressure to join in on a high-calorie food fest—say on a night out with friends when lots of wings and blue cheese or appetizers like mozzarella sticks and potato skins are ordered.  It isn’t the worst thing in the world to indulge just a bit if one of these items floats your boat, but just try to balance it out by ordering a healthy entrée, no matter what your companions do next.