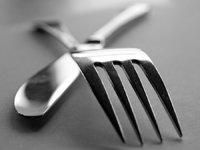 Sorry, Emily Post, but it’s time to forget about etiquette when setting your table.  Instead, maybe we should be focusing on the color, weight, and shape of the dining utensils we are choosing. According to recent research, the very look and feel of our cutlery may determine just how our food tastes at that particular meal.

The study, which took place at the University of Oxford in England, found that people perceive noticeable differences in a food’s flavor and density depending on the cutlery with which it is eaten.1 “Cutlery: Do Size, Weight, Shape and Color Matter?” Science Daily. 26 June 2013. Accessed 4 July 2013. http://www.sciencedaily.com/releases/2013/06/130626113420.htm   The researchers set up various experiments to determine the effect of the utensils.  One element that they considered was whether a utensil conformed to the expectations of the participant.  For example, when the weight of a utensil is what the test subjects expect it to be–e.g., a plastic spoon turns out to be just as light as expected–the yogurt that the subjects consume with it is rated as denser and more expensive.

In another trial of the study, the scientists compared the influence of the cutlery’s color.  When there is little color contrast, such as a white yogurt being eaten off of a white spoon, the volunteers say it is sweeter and more expensive and that they enjoy it more than when they consume a pink yogurt off the same spoon.  In versions of the experiment performed with a black spoon instead, the outcome was the opposite. From a black spoon, the pink-hued yogurt was considered preferable all around, suggesting that the greater color contrast was the cause of the difference in perception.  An experiment was also conducted in which the same type of cheese was served on a fork, spoon, knife, or toothpick.  The flavor was affected, with participants rating the cheese eaten off of the knife as the saltiest.

While this may be the first study that focuses on the influence of utensils on how we perceive our food, other research has determined noticeable effects from the plates and glasses we are using.  A 2011 study at the Cornell University Food and Brand Lab in Ithaca, New York, showed that people underestimate a portion size when using larger plates and overestimate when using smaller plates.2 Van Ittersum, Koert and Wansink, Brian. “Plate Size and Color Suggestibility: The Delboeuf Illusion’s Bias on Serving and Eating Behavior.” Journal of Consumer Research. 11 November 2011. Accessed 5 July 2013. http://www.jstor.org/stable/10.1086/662615   A study at the Polytechnic University of Valencia in Spain in 2012 suggests that a plate’s color may impact our perception of sweetness, intensity of flavor, and how much we like a food.3 Piqueeras-Fiszman, Betina; et al. “Is it the plate or is it the food?  Assessing the influence of the color (black or white) and shape of the plate on the perception of the food placed on it.” Food Quality and Preference. April 2012. Accessed 5 July 2013. http://www.sciencedirect.com/science/article/pii/S0950329311001820   And the dining atmosphere matters too–research at the University of Manchester in England in 2011 discovered that loud background noise can diminish our sensitivity to the flavor of the food during a meal.4 Woods, A.T.; et al. “Effect of background noise on food perception.” Food Quality and Preference. January 2011. Accessed 5 July 2013. http://www.sciencedirect.com/science/article/pii/S0950329310001217

All of these findings help us realize that everything we eat is more than just a quick taste in the mouth.  All of our senses come into play in determining what we choose to consume, how satisfying and enjoyable the meal ends up being, and how much of it we eat.  This knowledge can be used to make some minor adjustments that may make certain foods taste better or even keep you healthier and on track with a balanced diet.  For instance, if you love the flavor of salty food but want to avoid taking out that table salt shaker, try eating certain foods with a dull-edged knife in a quiet environment to increase your perception of their saltiness.  Similarly, being aware of the differences your cutlery and dishes can make may provide some strategies for consuming smaller quantities and still feeling satisfied for natural weight loss.  When you use a small plate and a lightweight utensil the same color as the food you are eating, your senses may very well send the signal to your brain that you have eaten a large dense meal that should satisfy your hunger.

Now obviously that doesn’t mean you need to give away your china and good silverware.  But choosing your place settings wisely may provide one more strategy for developing healthier habits.  And over time, as these habits become natural to us, we may not need to rely on a plastic spoon or a white plate to recognize an appropriate portion size or optimal flavor. Oh, and lest I forget, since plate size matters, it’s probably worth mentioning that it has been steadily growing over the last 2,000 years.