Helpful Husbands May Be Less Sexy 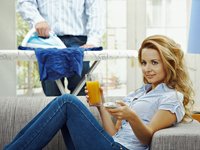 A new study has found that married men who perform traditionally masculine chores have more sex with their wives than their counterparts who help out with traditionally feminine tasks.

When speaking with their friends, women frequently complain that their husbands don’t help out enough around the house.  In this era of (somewhat more) equality between the genders, many more men do take responsibility and try to pitch in with chores at home than in previous decades.  But, according to a new study, the tasks they choose may determine whether or not these husbands are getting lucky at night. (Makes you wonder how and why these researchers came up with the idea for the study?)

The research, which took place at the University of Washington in Seattle, found that married men who perform traditionally masculine household chores have more sex with their wives than their counterparts who help out with traditionally feminine tasks.1 Mapes, Diane. “Husbands who do ‘her’ chores have less sex, study finds.” Today. 29 January 2013. Accessed 4 February 2013. http://todayhealth.today.com/_news/2013/01/30/16758810-husbands-who-do-her-chores-have-less-sex-study-finds?lite   The scientists analyzed the data from Wave 2 of the National Survey of Families and Households (NSFH) at the University of Wisconsin in Madison, collected from 4,500 married couples across the United States between 1992 and 1994.2 “A National Survey of Families and Households.” University of Wisconsin. 11 August 2008. Accessed 5 February 2013. http://www.ssc.wisc.edu/nsfh

They broke the housework down into two categories: those tasks typically done by men and those typically done by women.  In the customarily female category, they placed such chores as cleaning, cooking, shopping, and doing laundry.  The researchers placed bill paying, yard work, and car maintenance in the customarily male category.  Interestingly, those with the most traditional gender roles in their marriage when it came to pitching in with housework were found to have a higher frequency of sex. Those husbands who performed no “women’s work” at home had sex an average of 4.8 times per month.  The husbands who performed all of the “women’s work” at home, in contrast, were only having sex 3.2 times per month on average.

This would appear to fly in the face of the whole concept of women wanting their husbands to help more with the housework.  And maybe there are some traditionalist types who really don’t want their husbands making a meal or wielding a mop. But it’s sort of difficult to believe that nowadays, a woman wouldn’t appreciate coming home from a long day at work to find her husband already there, pulling something warm and delicious out of the oven. When you think about it, who does the cooking at Wolfgang Pucks house — and would you punish him for doing it? Which actually brings us to several problem points with this study.

One important issue was the timing of the research used.  The NSFH surveys were taken in the early to mid 1990s, approximately 20 years ago at this point.  Household structures have changed since then.  For instance, in 1980, 39 percent of all families had both husbands and wives working, whereas that number increased to 55 percent by 1993.  And as of 2009, according to the Bureau of Labor Statistics, 59 percent of wives are working.3 Foster, Ann C. and Kreisler, Craig J. “Wife’s employment and allocation of resources in families with children.” Bureau of Labor Statistics. September 2012. Accessed 5 February 2013. http://www.bls.gov/opub/mlr/2012/09/art1full.pdf   In more traditional settings, the home and children were primarily the wife’s responsibility while her partner supported the family.  But that has changed with more and more working wives.

Another troubling facet of this study is that other factors do not appear to have been considered as a reason for a somewhat diminished sex life.  As a couple ages, the man who has been working full time may retire.  Now that he’s home more, he might decide to try his hand at cooking or help his wife by vacuuming.  In cases such as this, it might be that a lower frequency of sex has nothing to do with a man doing unmanly chores but simply more about waning libidos.  Or even with younger couples who are both working and raising small kids, the husband may be doing plenty of traditionally female tasks.  The lack of regular sex may be from exhaustion or not getting any alone time, rather than because his wife finds him less appealing. Holding to traditional gender roles may be a luxury that can only be afforded by those couples who are not too stressed.

In fact, if you find you are less interested in having sex than in the past, it may have more to do with your hormones than with the division of chores in your household.  Both men and women typically begin to experience hormonal imbalances by the age of 30 because of an abundance of estrogen exposure from various environmental sources.  Therefore, it is important to consider supplementing with a formula that will restore this balance to maintain not only your sex drive, but energy level, muscle building ability, and circulation.