Deodorant’s Not for Everyone? 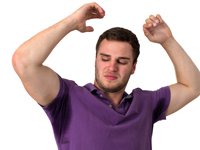 New research has found that not everyone produces the type of body odor that deodorant can inhibit, rendering these products useless for a segment of the population.

Way back in your middle school health classes, you were probably taught about the changes your body was undergoing and the new requirements it entailed for good hygiene.  More frequent bathing, cleaning your face regularly to prevent acne, and wearing deodorant every day were most likely among the topics.  But now, new research has found that not everyone produces the type of body and armpit odor that deodorant can inhibit, rendering these products useless for a segment of the population.

The study, conducted at the University of Bristol in the United Kingdom, discovered that approximately two percent of women possess a genetic variation that results in their having no underarm odor.1 “Deodorants: Do We Really Need Them?” Science Daily. 17 January 2013. Accessed 21 January 2013. http://www.sciencedaily.com/releases/2013/01/130117084928.htm   The subjects were 6,495 adult women who took part in the Children of the 90s Study, a long-term research project that had enrolled more than 14,000 women who were pregnant in 1991 or 1992.2 “Avon Longitudinal Study of Parents and Children.” University of Bristol. 22 January 2013. Accessed 22 January 2013. http://www.bristol.ac.uk/alspac   A small number of these women–just 117–were found to have a variant of the ABCC11 gene, which helps them stay odor-free even when they sweat.  Since no men were involved in the research, we can only guess whether they would possess this gene variation in similar percentages.

Of the armpit odor-producing participants in the study, an estimated five percent skip deodorant.  However, among those who do not become odiferous, more than 20 percent wear no deodorant.  Obviously, at some point they must have become aware that they do not generate the same type of body odor as the vast majority of people and decided to forgo deodorant.  But that leaves the remaining 78 percent of these individuals who have no underarm odor, yet still wear deodorant regularly.  It would have been interesting had the researchers asked questions about why deodorant is worn to try to determine whether these people are not cognizant of the fact that they produce no odor or if they are simply trying to follow what they consider a hygienic routine, whether it is necessary for them or not. Or perhaps, they use antiperspirant deodorants, not to prevent odor, but to prevent unsightly sweat stains under their arms.

For most of us, odor is emitted from the underarms after sweat is produced in the glands under the skin.  Once the sweat mixes with the bacteria that live on the surface of the skin, the odor is created…provided a normal ABC11 gene is present. The normal gene is required for the production of normal sweat odor. If a person has the variant and not the normal gene, no normal sweat odor is produced no matter how much they sweat. But keep in mind that odor from bacteria is only one source of underarm odor. Smells from the foods we eat make their way into our sweat also — and they have no connection to the ABC11 gene. Garlic-laden foods in particular tend to come out in your pores.  As your digestive system begins to break down and metabolize the garlic, it produces a particularly pungent smell that tends to linger on the skin.3 Watson, Stephanie. “Can What You Eat Make You Sweat?” WebMD. 12 August 2010. Accessed 22 January 2013. http://www.webmd.com/skin-problems-and-treatments/features/what-you-eat   And a 2006 study at Charles University in Prague, Czech Republic, confirmed something that vegetarians have long been aware of: that meat eaters often emit an unattractive odor.4 Havlicek, Jan and Lenochova, Pavlina. “The Effect of Meat Consumption on Body Odor Attractiveness.” Chemical Senses. 4 August 2006. Accessed 22 January 2013. http://chemse.oxfordjournals.org/content/31/8/747.abstract So maybe people with the aberrant gene need deodorant after all.

Back to the deodorant study, the researchers also found that people with the uncommon version of the ABCC11 gene tend to have dry ear wax rather than the typically sticky stuff most of us produce.  So, if you don’t feel like sniffing your underarms after a good workout, you can always check your ear wax to determine whether you are part of the non-odoriferous group.

If you are among the lucky few who do not produce normal underarm odor due to this gene variation, there is no hygienic reason to continue using deodorant… dietary choices and underarm wetness aside.  In fact, it’s quite likely to be safer not to use the stuff.  A study at the University of Reading in England in 2009 found that chemicals called parabens used in many commercial deodorants were present in 99 percent of breast cancer tissues taken from women being treated for the disease.5 Darbre, Philippa D. “Underarm antiperspirants/deodorants and breast cancer.” Breast Cancer Res. 2009; 11(Suppl 3): S5. Accessed 22 January 2013. http://www.ncbi.nlm.nih.gov/pmc/articles/PMC2797685   Parabens are estrogen-mimicking xenoestrogens that are also used in a number of other grooming products, so it’s nearly impossible to identify those in deodorants alone as the major contributor, but it is certainly worth reading labels and trying to choose products labeled paraben-free.

Then again, given that exposure to parabens and other xenoestrogens is almost impossible to avoid, it’s probably a good idea for women to consider supplementation with a natural progesterone crème.  Our exposure to xenoestrogens through the food we eat, water we drink, and all around the world we live in is ever increasing and cumulative.  A natural progesterone formula (both men’s and women’s versions) can balance our hormones and help protect us from certain forms of cancer.