Restoring Sight to the Blind 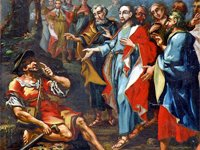 What could be more emblematic of a Divine miracle than restoring sight to a blind person? According to the world’s great scriptures, only a heavenly being has the power to reverse blindness. If so, they are now working through the scientists at the National Eye Institute who have developed a device that actually allows blind people to see forms and shapes and even to read large letters.1 Belluck, Pam. “Device Offers Partial Vision for the Blind.” 14 February 2013. The New York Times, 15 February 2013. http://www.nytimes.com/2013/02/15/health/fda-approves-technology-to-give-limited-vision-to-blind-people.html While science is brimming with other studies exploring sight-restoring methods, this one is the first approved by the FDA (literally, just days ago on Valentine’s Day) for widespread use.

The new device, known as the Argus II, has several components. First, there’s a pill-sized artificial retina that gets implanted into the patient’s eyes. The “retina” includes 55 electrodes that sense light. For the retinal implants to function, the patient needs to wear special glasses equipped with a tiny video camera and a processor that attaches to a belt. The video camera records images in the patient’s visual field while the processor translates those images into pixelized patterns. The patterns in turn get transmitted to the electrodes in the retinal implants and then sent on to the brain. The setup is less cumbersome than it sounds, and certainly worth it for those who have been living in total darkness.

“If I don’t wear it, it’s like I don’t have my pants on,” said lawyer Dean Lloyd, one of the 50 individuals fitted with the device during clinical trials.

In its current incarnation, Argus II only works for people who have a type of blindness known as retinitis pigmentosa, a disorder that attacks sighted individuals and eventually destroys the light-processing cells in their retinas. The disease afflicts about 100,000 individuals nationwide, and while that’s not a huge number, scientists express excitement about potential applications with other, more widespread, forms of blindness such as macular degeneration, which afflicts several million Americans

While the Argus II doesn’t fully restore normal vision, it does allow patients to discern contours, street signs, and outlines of objects, especially when there’s a contrast between light and dark. The images usually come through in shades of gray, although some patients do occasionally see bursts of color. It seems that the device works better for some patients than others, and the researchers haven’t yet figured out why. Among those it works well for, though, it’s a wonder.

“Without the system, I wouldn’t be able to see anything at all, and if you were in front of me and you moved left and right, I’m not going to realize any of this,” said Elias Konstantopolous of Baltimore. “When you have nothing, this is something. It’s a lot.” Another of the subjects crooned that she was able to discern Rod Stewart’s hair in a concert. Scientists say they hope to eventually be able to implant electrodes directly into the brain to more effectively correct all types of blindness. Meanwhile, they’re working to perfect the Argus II, trying to increase the number of electrodes that the bionic retina contains so that patients get more detailed images.2 LaPook, Jonathan. “New technology may bring sight back to blind.” 28 September 2012. CBS News. 15 February 2013. http://www.cbsnews.com/8301-18563_162-57522740/new-technology-may-bring-sight-back-to-blind

The Argus II costs about $150,000, not including the surgery.3 John, Ollie. “Bionic ‘Eye’ Helps the Blind to Partially See.” 15 February 2013. Time. 16 February 2013. http://newsfeed.time.com/2013/02/15/bionic-eye-helps-the-blind-to-partially-see In Europe, insurance covers the whole thing, and it is already approved there for use with blindness due to any type of retinal deterioration. Insurance companies in the US haven’t yet committed, although experts express confidence that the US insurers will step up eventually.

Meanwhile, on other frontiers, scientists are testing out different methods that hold promise for giving sight back to blind people. One of the more promising possibilities comes from stem cell research.4 “Stem Cells Improve Vision in Blind Mice.” 1 October 2012. Science Daily. 15 February 2013. http://www.sciencedaily.com/releases/2012/10/121001141127.htm Last year, researchers injected non-embryonic stem cells derived from adult human skin into the damaged retinas of 30 mice. The mice recovered retinal function, which continued into their old age. So far, no human clinical trials have been undertaken, but those are on the horizon.

Said chief researcher Dr. Stephen Tsang of Columbia University, “With eye diseases, I think we’re getting close to a scenario where a patient’s own skin cells are used to replace retina cells destroyed by disease or degeneration. It’s often said that iPS [non-embryonic stem cell] transplantation will be important in the practice of medicine in some distant future, but our paper suggests the future is almost here.”

Gene therapy also offers hope for the blind. In another study last year from the University of Pennsylvania, scientists injected functional genes into the retinas of patients suffering from Leber’s congenital amaurosis, a form of blindness caused by genetic mutations.5 Jabr, Ferris. “Sight Seen: Gene Therapy Restores Vision in Both Eyes.” 8 February 2012. Scientific American. 15 February 2013. http://www.scientificamerican.com/article.cfm?id=gene-therapy-blindness Half of the patients recovered so much sight that they no longer were considered legally blind.

Another form of gene therapy, called optogenetics, also shows great promise. This form of treatment involves retraining cells to perform functions other than their intended function. In the case of blind people, the rods and cones in their retinas have typically become unresponsive to light. With optogenetics, scientists inject viruses into the retina to stimulate ganglion cells, which normally act as neurotransmitters carrying information from the retina to the brain, to instead take on the function of the light-sensitive rods and cones and bring visual information directly to the brain. So far, rodent experiments have been successful and human clinical trials are due to proceed this year.

In the words of the prophetic Paul Simon, “These are the days of miracle and wonder.” It seems that at the current pace of progress, blindness will soon no longer be curable only at the hands of saints and gurus, unless one considers medical practitioners to be imbued with divine powers.