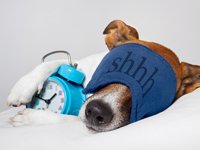 Hawaiian comedian Rap Reiplinger does a sketch in which he teaches viewers how to cook chicken (see below). The main ingredient, other than the chicken, is wine. Reiplinger explains throughout the routine that the wine must be “not too sweet, not too rancid–but just right.” At every step, of course, he takes swigs to make sure the wine is, in fact, “just right.”

Likewise, it seems, we humans need just the right amount of sleep–not too much, and not too little. If we get more or less than we need, it seems, our mental and physical health declines dramatically. Now, several new studies show that getting excess sleep may be even more harmful than getting too little, but either way, the brain and body suffer.

The first study of sleep health, from Columbia University and the University of Madrid, discovered that elderly individuals who slept more than nine hours a night had twice the rate of cognitive decline compared to those who slept between 6-8 hours.1 Paddock, Catharine. “Sleeping longer linked to faster decline in brain function.” 9 October 2013. Medical News Today. 18 October 2013. http://www.medicalnewstoday.com/articles/267176.php The research followed 2700 individuals in their 60s and 70s for a period of three years. At the outset, the subjects took a test known as the MMSE, or Mini-Mental State Examination, which assesses dementia. Sleep patterns were monitored throughout the study period. Almost half of the participants typically slept 6-8 hours a night. Forty percent slept nine or more hours, and the remaining 11 percent slept less than six.

Apparently, in all three groups, the participants showed cognitive decline. In other words, getting the perfect amount of sleep doesn’t counteract the detrimental effects of aging. But, that decline was doubled in the group that slept over nine hours at a time. On the other hand, the study authors point out that the results don’t necessarily prove that long sleep causes the decline; only that it’s linked to it. In fact, they say, sleeping long hours might be a symptom of mental decline, rather than the cause of it.

Meanwhile, a simultaneous study of over 54,000 individuals over the age of 45 found that too little sleep–as well as too much–increases vulnerability to chronic diseases, including diabetes and heart disease. 2 Paddock, Catharaine. “Sleeping too much or too little linked to chronic diseases. 7 October 2013. Medical News Today. 18 October 2013. http://www.medicalnewstoday.com/articles/267075.php  The guidelines in this study defined too much sleep as anything over 10 hours a night, while too little sleep included anything under six hours. The results showed that those who slept fewer hours had elevated rates of heart disease, stroke and diabetes. But once again, long hours of sleep led to worse outcomes. Those who slept more than 10 hours a night showed a particularly marked likelihood for developing these chronic conditions. In short, lounging about in bed for extra hours seems unwise if you want to prolong your body and brain health.

The study authors point out that long sleep doesn’t necessarily equal good sleep. One reason some people stay in bed so long is that they don’t actually sleep deeply. A person who has sleep apnea, for instance, may keep waking up during the night, meaning that what looks like 10 hours of sleep might only be five hours of good quality rest, all things considered.

As Dr. Safwan Badr, president of the American Academy of Sleep Medicine, says, “Sleeping longer doesn’t necessarily mean you’re sleeping well. It is important to understand that both the quality and quantity of sleep impact your health.”

Yet one more new study underlines this truth. This study, from the University of Rochester Medical School, found that the brain actually detoxes during deep sleep.3 Haiken, Melanie. “Sleep ‘Detoxes’ the Brain, New Research Suggests.” 13 October 2013. Forbes. 18 October 2013. http://www.forbes.com/sites/melaniehaiken/2013/10/18/sleep-detoxes-the-brain-new-research-suggests Apparently, when we snooze, the brain rids itself of amyloid-beta proteins at 10 times the waking rate. This is important because amyloid beta proteins build up in the brain over time, causing the plaque that may be responsible for Alzheimer’s disease.  For this enhanced detoxing process to work, we need to be getting deep sleep.

The researchers found that the amyloid beta proteins leave the brain by a flushing process that occurs when cerebrospinal fluid flows between brain cells. Apparently, brain cells actually shrink by up to 60 percent while we sleep (which might explain some of our weirder dreams). This leaves extra room between cells, so that the cerebrospinal fluid can flow with more force and speed. It’s like “turning on a faucet…[that leads to the] active clearance of the by-products of neural activity,” explains study director Dr. Maiken Nedergaard. The researchers say the study results point to exciting possibilities in preventing the development of Alzheimer’s Disease.

This last study, of course, points to the necessity of getting enough sleep; it doesn’t explain why excess sleep leads to faster cognitive decline. Based on this study alone, you might imagine that the more sleep we get, the more flushing that goes on. Obviously, other factors are at play.

The bottom line seems to be that getting deep, restful sleep for a normal period of time is essential, and if you find yourself suffering either from insomnia or sleep addiction, you need to do something about it. Jon Barron has written before about how to get good sleep without resorting to drugs, in case you need help. And whatever you do, don’t turn to sleeping pills to help you sleep. Studies have shown they increase your risk of death by 350-500 percent.