The Positive Side of Shopping 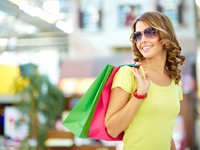 “I haven’t reported my missing credit card to the police because whoever stole it is spending less than my wife.” –Ilie Nastase

Women often get a bad rap for being shopaholics and wasting money on frivolous things they don’t really need.  But the truth of the matter is that certain people–men and women alike–simply enjoy spending some of their free time going shopping.  And although that may not be as enriching a pursuit as attending a classical music concert or studying the works of master painters in a museum, it’s not necessarily always a bad thing?  New mental health articles suggest that while some forms of shopping may have a negative impact on us, others might actually be positive.

The study, which took place at Tilburg University in the Netherlands, found that for many people shopping increases loneliness. However, for a particular segment of shoppers, it appears to have the opposite effect.1 Doheny, Kathleen. “‘Retail Therapy’ Might Not Be So Bad After All.” WebMD. 2 August 2013. Accessed 7 August 2013. http://www.webmd.com/mental-health/news/20130802/retail-therapy-might-not-be-so-bad-after-all   The subjects were more than 2,500 Dutch adults who were surveyed over the course of a six-year period about their shopping habits, materialism, and feelings of loneliness.  Some of the questions were specifically focused on the participants’ motivations for engaging in shopping at any given time.

While the results showed that loneliness often caused the subjects to go shopping in an attempt to feel more fulfilled, the shopping itsellf in many cases ended up increasing the subject’s loneliness even further.  But, and here’s the interesting part, that depended upon the person’s approach to their shopping endeavors.  The scientists categorized the shoppers into three distinct groups based on their shopping motivation.  There were those who made purchases in order to be impressive to others and elevate their potential social standing.  These “keeping up with the Joneses” types were, not surprisingly, made more lonely by their shopping.  The next group was those who think they can only be happy if they buy this one important item, believing that would be the key to improving their lives.  Again, it was no shock that these individuals became even lonelier after shopping than the first group.

In contrast, it was the third group–the people who just bought things because they wanted them with no ulterior motives–that was found to become happier and less lonely after going shopping.  While some might characterize this as materialistic, this segment of subjects doesn’t actually feel the need to purchase an object in order to fill some gaping hole or dissatisfaction in their lives, nor do they need to show off in front of others.  The bottom line is that if your motivation to buy something is just because you want it, chances are you will truly enjoy the item and increase your overall happiness…at least for a while.

But let’s also keep in mind that there are many, many other ways to get yourself feeling more upbeat and satisfied and chase away loneliness.  Social connections of just about every kind have been shown to increase our satisfaction with our lives.  A 2012 study at University College London in the United Kingdom found that having a network of friends during middle-age was more influential on their well-being than socioeconomics or prior mental health.2 Cable, Noriko; et al. “Friends are equally important to men and women, but family matters more for men’s well-being.” Journal of Epidemiology and Community Health. 1 August 2012. Accessed 8 August 2013. http://jech.bmj.com/content/67/2/166.abstract?sid=9ca67a7a-e430-4625-997c-38441e8cc570   But make sure that your friends are not prone to feeling lonely. Studies have shown that loneliness can be contagious. Volunteering has also been found to benefit a person’s self-esteem while at the same time doing some good for others.  In fact, a recent study at Carnegie Mellon University in Pittsburgh, Pennsylvania, determined that those who devote time to volunteering regularly have lower rates of hypertension as well.3 Sneed, Rodlescia S. and Cohen, Sheldon. “A prospective study of volunteerism and hypertension risk in older adults.” Psychology and Aging. June 2013. Accessed 8 August 2013. http://psycnet.apa.org/journals/pag/28/2/578   And don’t forget fitness and exercise.  Whether you take a class at the gym, go for a run, work out at home, or do any other type of physical activity, you are releasing endorphins that will boost your mood, reduce your stress, and keep you feeling good for hours afterward. In fact, some studies have shown that exercise might actually be more effective than pharmaceutical drugs when it comes to treating depression.  Without breaking the bank, there are few shopping trips that can do that for you on a regular basis.