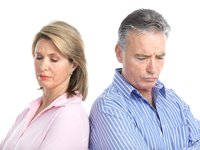 After going through a divorce, some people understandably endure a rough patch, feeling sad and alone.  But according to new research, that is definitely not the only possible post-divorce experience.  In fact, many women in particular were found to be happier and more content with their lives all around once they were newly single again.

The study, which took place at Kingston University in London, England, discovered that women considered themselves much more satisfied than they had been during marriage for up to five years after getting divorced.1 “Divorce Can Spell Big Boost to Women’s Happiness, UK Research Shows.” Science Daily. 10 July 2013. Accessed 18 July 2013. http://www.sciencedaily.com/releases/2013/07/130710114330.htm   The participants were 10,000 people across the United Kingdom who ranged in age from 16 to 60 years old when the research began.  They were followed for 20 years, during which time they were surveyed on a regular basis.  Many of the questions they were asked related to how they perceived their own overall happiness at that point in time.

The researchers determined a baseline point of satisfaction for each subject, which was basically the average amount of happiness that they typically felt on an ongoing basis.  Throughout the two decades, the volunteers were asked to report on any milestones that were approaching or that had occurred.  The investigators then compared the happiness levels reported around these major life events to those of the baseline numbers in order to determine their effects.

When a woman reported getting divorced, her level of life satisfaction typically increased to a significant degree above whatever her baseline had been.  And it wasn’t just a blip on the radar, either.  This state of elevated happiness tended to stay with the divorced women, sometimes for as long as five years after the divorce papers were signed.  Men also experienced a boost in happiness from divorce, but not nearly one so pronounced or prolonged as their female counterparts.

These findings are somewhat surprising, considering that other mental health articles have shown that women sometimes have a difficult time after a divorce.  A 2012 study at the Australian Institute of Family Studies in Melbourne found that income levels drop for women after divorce, while the income levels for men after divorce continue to grow.2 Wells, Rachel. “Financial hit is worse for women after marriage end.” The Sydney Morning Herald. 24 July 2012. Accessed 19 July 2013. http://www.smh.com.au/lifestyle/life/financial-hit-is-worse-for-women-after-marriage-end-20120723-22krf.html   The problem was discovered to be particularly acute for women who still had dependent children living at home, making it more difficult for them to obtain decent paying jobs and pay for childcare.

Nevertheless, despite having to deal with certain hardships, according to the current research, women appear to be more content with their post-divorce lives overall than men are.  Maybe that is at least partially due to the fact that women tend to be the ones who ask for the divorce.  The National Marriage Project, based at the University of Virginia in Charlottesville, reports that two-thirds of the divorces in the United States are initiated by the wife.3 “When Marriage Disappears: The New Middle America.” National Marriage Project. 2012. Accessed 19 July 2013. http://nationalmarriageproject.org/wp-content/uploads/2012/06/Union_11_12_10.pdf   Whether both spouses are unhappy in the marriage or not, the woman is the one taking control of her life and making a move to get what she wants.

The current study evaluates its findings through the use of a psychology concept known as adaptation, which is our method of coping with changes in our lives, a common factor in women’s health issues.  All kinds of major events require adaptation, including positive moments such as getting married or having a child, as well as negative occurrences such as the death of a loved one or losing your job.  So it may just be that women have a somewhat better ability to adapt to changes, or roll with the punches, than men.  A 2010 study at Michigan State University in East Lansing found that men tend to be less satisfied with their lives in the initial year after divorce and beyond.4 Hughes, Jr., Robert. “How long does it take to recover emotionally from divorce?” Huffington Post. 30 November 2010. Accessed 19 July 2013. http://www.huffingtonpost.com/robert-hughes/how-long-does-it-take-to-_1_b_788247.html   Even getting remarried did not provide as much of a boost in happiness for men as for women.

So men, take note.  It seems that the only benefit you will get through divorce may be financial…unless you factor in alimony and child support.  The secret to true contentment just might involve working out your differences and doing everything you can to keep your marriage together.  It’s also important to remember that just because divorce may work out well for the parents doesn’t mean it’s necessarily great for the kids.

Gallery image with caption: Seven Things About Plastic Surgery You Might Not Know

Gallery image with caption: 6 Ways to Give More Compliments