Bullied at Work Because of Looks 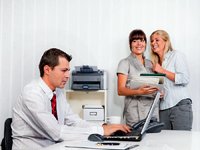 Beauty may be in the eye of the beholder, but everyone knows that those who are conventionally attractive enjoy certain benefits that others don’t.  Aside from the obvious, such as the ridiculous salaries of some models and actors, even normally good looking people can put their attractiveness to use when trying to get help in a store or talk their way out of a speeding ticket.  These minor little perks may be enjoyable, but whether we are attractive or not doesn’t really influence our daily lives.  Or does it?  A new study has found that those who are considered unattractive may have to endure bullying on the job solely because of their looks.

The research, which took place jointly through the University of Notre Dame in Indiana and Michigan State University in East Lansing, found that unattractive people experience abuse from coworkers that is similar in nature to much of that endured by adolescents during school years.1 “Unattractive People More Likely to Be Bullied at Work.” Science Daily. 17 July 2013. Accessed 25 July 2013. http://www.sciencedaily.com/releases/2013/07/130717164723.htm   The subjects were 114 adults employed in a healthcare setting.  They were questioned by the scientists in regard to the ways their colleagues typically treated them.  The participants were told to report any cruel behavior toward them, hurtful remarks, rude actions, and instances in which coworkers poked fun at them.  A digital photo was then taken of each volunteer, and these were shown to an objective pool of people who had never met any of the subjects.  This second group was asked to rate the attractiveness of each of the workers.

In several mental health articles, the individuals who were rated unattractive were found to be much more likely to be the target of workplace bullying as compared to their better looking peers.  It’s bad enough that looks have been shown to affect success and earnings in our careers.  A 1994 study at the University of Texas in Austin found that unattractive people earn five to 10 percent less than those with average looks, and the average looking group earns three to eight percent less than those considered very attractive.2 Hamermesh, Daniel S. and Biddle, Jeff E. “Beauty and the Labor Market.” University of Texas. December 1994. Accessed 26 July 2013. http://webspace.utexas.edu/hamermes/www/BeautyAER94.pdf The current experiment did not focus on a lack of promotions or raises at work, but in some ways it was equally disturbing since it found the source of the mistreatment was the very coworkers employed right alongside these individuals.  So not only does it appear that less attractive people may be at a disadvantage in terms of moving up the corporate ladder, but they may also be much more likely to have a miserable day-to-day experience while at work.

There is no question that bullying is a serious matter with sometimes profound consequences.  In children, unlike with adult workers, the assault is usually physical, but the goal of displaying dominance is often the same.  And bullying has been shown to have long-lasting psychological effects on its child victims.  A 2013 study at the Duke University School of Medicine in Durham, North Carolina, found that children who have been bullied grow into adults with a high risk of developing a number of psychological disorders, such as stress and anxiety.  And, while self-esteem might not be quite as fragile in adults as it is in kids, adults who have been bullied have been shown to face an increased risk of anxiety, panic attacks, clinical depression, post-traumatic stress disorder, and even heart attack and stroke.3 “Adult bullying.” PBS. 2011. Accessed 26 July 2013. http://www.pbs.org/thisemotionallife/topic/bullying/adult-bullying It’s also worth noting that for many of the adults who are bullied, it’s merely the continuation of an ugly trend that began when they were children.

On the bright side, there may be some things you can do to improve the situation.  Stand up to bullies whether you are the one getting picked on or you are watching it happen.  Many bullies aim to intimidate, and if they are not getting anywhere, the behavior will stop.  Speak to the bully about the situation if you are comfortable doing so. If not, take the problem to a supervisor or human resources manager.  Keep meticulous records of the instances of bullying you have had to endure–even if the culprit is a workplace favorite, no company wants to deal with the expense, stress, and potential bad publicity of a lawsuit. And if you’re a parent with a child who’s bullying others, you might want to control what they’re watching on TV. As we’ve discussed before, TV is a veritable training ground for bullies.