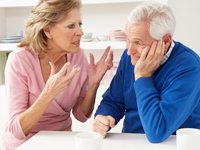 “All marriages are happy.  It’s the living together afterward that causes all the trouble.”   –Raymond Hull

There are many comedians who seem to have made a living off jokes about how terrible marriage can be as time goes on. It is also the subject of numerous mental health articles. While there are plenty of married couples who truly can’t work out their differences and end up getting separated or divorced, many others remain in their union for the long haul.  And according to new research, a perk of sticking it out through thick and thin as you get older may be quarreling less in your later years.

The study, which took place at San Francisco State University in California, determined that couples who were married for a long time tend to disengage quickly at the first sign of a potential squabble.1 Preidt, Robert. “Marital Spats May Decline as Couples Age.” WebMD. 2 July 2013. Accessed 11 July 2013. http://www.webmd.com/sex-relationships/news/20130701/marital-spats-may-decline-as-couples-age   Their methods of coping with disagreements change over the years as they develop strategies to avoid having a spat.  The subjects were 127 couples who had been married for many years and were either middle aged or seniors when the research began.  The project stretched over a period of 13 years, during which time the couples occasionally participated in 15-minute videotaped conversations.  The topics of conversation for the taped segments were always something of a nature that could provoke a dispute, such as the division of household chores or monetary issues.

The scientists discovered that no matter what their technique of arguing during the earlier years, as they aged, both spouses would increasingly employ strategies that would effectively put an end to the argument.  The most common ways for both men and women to avoid conflicts with their mate were by either changing the subject or redirecting their partner’s attention to something other than the topic at hand.  It was the investigators’ contention that after so many years of bickering over various things, these long-time marrieds just might be ready to put an end to most of their fighting in favor of more agreeable things to discuss, thus decreasing their overall stress and anxiety.

These findings held true even for the couples who had typically engaged in a demand-withdraw pattern of communicating with each other.  In this form of communication, which can be very detrimental to a relationship, one of the spouses acts as the aggressor, placing blame on the other for something or puts pressure on the other to change.  The other spouse reacts by making attempts to withdraw from the conversation.  One of the problems with this method of dealing with a disagreement is that it often replaces what could be an actual dialogue that might foster discussion and hopefully end with a resolution of the issue at hand.  Not surprisingly, in a 2009 study at the University of Wisconsin-Madison, the demand-withdraw pattern was associated with increased marital dissatisfaction and the development of depression in a spouse.2 Papp, Lauren M.; et al. “Demand-withdraw patterns in marital conflict in the home.” Personal Relationships. 5 June 2009. Accessed 12 July 2013. http://www.ncbi.nlm.nih.gov/pmc/articles/PMC3218801   However, after a couple has been married for decades, the current research found that this appears to shift from one partner pursuing the argument to both partners looking to get along.

Of course there may be a downside to less frequent conflicts, such as a spouse spending money excessively when finances are limited or a spouse getting stuck doing all of the housework while the other naps or plays cards with friends.  In those instances, you would hope that the couple has worked out some system to make disparities in their relationship more equitable and positive; but in reality, we all know people who are happy to let their significant other carry most of the burdens.  In some instances, it may just be a couple following a very traditional division of household duties, such as the husband being in charge of earning the income and overseeing the finances, while the wife does the shopping, cooking, and cleaning.  What works for one couple may not be ideal for another, but if both partners are satisfied, than that’s what really matters.  And it’s a nice thing to hope for once the children are grown and the nest is empty once again–the chance to reconnect with your spouse on a whole new level, which really shouldn’t be marred by a whole lot of senseless squabbling.