Texting and Driving During Middle Age 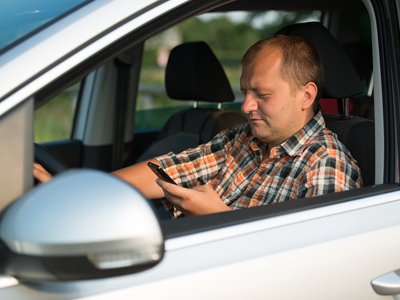 We’ve done numerous blogs on the dangers of doing anything while texting–especially walking or driving. And we most associate such behavior with young people. So it might surprise you to learn that, according to new research, texting while driving is actually a bigger problem for middle-aged people than it is for teens and young adults.

The study, which was conducted at Wayne State University in Detroit, Michigan, found that as drivers get older, the risk of making certain errors on the road due to combining texting with driving increases greatly.1 Mozes, Alan. “Middle-Aged Worse at Texting While Driving: Study.” WebMD. 30 December 2014. Accessed 4 January 2015. http://www.webmd.com/healthy-aging/news/20141230/middle-aged-worse-at-texting-while-driving-study-shows The subjects were 50 licensed drivers between the ages of 18 and 59 who took part in simulated road tests. They entered a four-door driving simulator that provided realistic conditions designed to make them feel like they were cruising along a two-lane rural road with no stop signs or oncoming traffic.

The participants were questioned about their facility with texting. The smallest group, consisting of seven of the volunteers, were defined as having limited texting capability because they used one finger to type and couldn’t readily find the necessary letters. A second group of 16 had adequate texting ability but required the use of both hands to text. The third group was the largest, made up of 27 individuals deemed skilled texters who were adept at texting using just one hand. Then, the scientists further subdivided the subjects according to their age. The subsets they created consisted of those between 18 and 24, 25 to 34, 35 to 44, and 45 to 59.

All of the participants spent 30 minutes driving the computerized simulator. For a portion of this time, they were instructed to maintain a speed of 50 to 60 miles per hour and simultaneously read and respond to a few brief texts using one hand. Approximately two-thirds of the volunteers drifted out of their lane, either crossing lines into oncoming traffic or moving onto the shoulder in what’s known as lane excursions. Even among the segment with the best texting abilities, about 50 percent committed this potentially deadly mistake.

When the results were analyzed according to the age groups of the subjects, the differences were even more pronounced. Whereas the youngest drivers are typically the population we would most likely expect to not drive as well while distracted, the opposite was actually true. Only about 25 percent of the 18- to 24-year-old group committed lane excursions in comparison to approximately 40 percent in the 25 to 34 category and a whopping 80 percent of the 35- to 44-year-olds. And in the oldest group that figure rose to nearly 100 percent of drivers.

These findings are in contrast to 2013 research conducted by the National Highway Traffic Safety Administration that found that it is the youngest age group that has the largest proportion of drivers who were distracted.2 “Distracted Driving 2011.” National Highway Traffic Safety Administration. April 2013. Accessed 5 January 2015. http://www-nrd.nhtsa.dot.gov/Pubs/811737.pdf These distractions most often involved cell phone use, but can also be caused by a multitude of disturbances including conversations with passengers, fiddling with the radio, or using a GPS. The vastly different results of the current study could be due to something unique to texting, particularly since younger drivers may frequently be more proficient texters than their older counterparts and therefore are more capable of managing a car at the same time.

At any rate, the study serves as a good reminder that we would all benefit from putting our phones away while we are behind the wheel. Even if you are not a big texter, most drivers cannot perform well while talking on a cell phone either. A 2011 study at the Transport Research Laboratory in the United Kingdom found that reaction times were 30 percent slower when speaking on a cell phone than when legally drunk. So keep your phone out of reach if the temptation is too great–no text or call is worth having an accident.