Saying “I Do” to Health Together 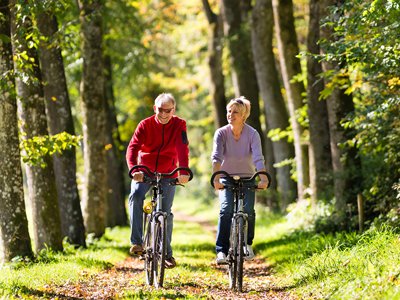 If you’ve been together awhile, you and your significant other are probably very comfortable making decisions as a couple. From plans as big as choosing a home to those as small as what movie to see Saturday night, life as a couple is full of working things out side by side. This may even extend to certain lifestyle habits, such as joining the same gym or buying nutritious groceries. If that’s the case, it would appear you are on the right track. New research suggests that efforts to improve health habits are much more successful if you take them on with your mate.

The study, which was conducted at University College London in the United Kingdom, found that long-time spouses who teamed up in pursuit of a healthier lifestyle or to give up unhealthy habits were more likely to achieve their goals than were those who attempted to do it individually.1 Shah, Yagana. “Healthier Habits Are Easier To Adopt As A Couple, Study Finds.” Huffington Post. 20 January 2015. Accessed 28 January 2015. http://www.huffingtonpost.com/2015/01/20/adopt-healthier-habits-as-a-couple-study_n_6508402.html The subjects were more than 3,700 couples over the age of 50 who were involved in the English Longitudinal Study on Ageing, which is a collection of interdisciplinary data on many aspects of health and well-being.

To determine just how much of an impact the support and participation of a partner can make, the scientists focused only on those couples in which one or both of them was in need of some health and fitness upgrades. In each case, at least one spouse was overweight, sedentary, or a smoker. The findings demonstrated that those couples who worked together to start an exercise routine, shed extra pounds, or stop smoking were consistently more successful at reaching their objective compared to the couples in which only one partner attempted to change. Interestingly, the outcomes were the same even when one of the individuals needed no improvement in that particular area.

The results showed that sticking with a steady workout was the habit most positively impacted by a do-it-together approach. Approximately two-thirds of the volunteers maintained their new exercise habits when both partners participated. In contrast, when just one spouse started a new workout regimen, only about a quarter of them kept up with it.

For those subjects attempting to shed extra pounds, the scientists set the bar at losing five percent of body weight. The results in this case differed slightly between men and women. Among the men, 25 percent pared off pounds alongside their spouse, versus only 10 percent of men who tried doing it on their own. Among the women, 36 percent dropped pounds together with their husband, but only 15 percent hit this benchmark when their spouse failed to make the effort too.

And the biggest disparity in whether a habit was successfully changed came in the smoking category. Both men and women were able to quit approximately 50 percent of the time when their partner was committed to giving up cigarettes as well. Yet when their spouse had no interest in quitting, the success rate dropped precipitously to a measly eight percent.

These outcomes make perfect sense when you consider how difficult it can be for us to change ingrained patterns or give up our vices. A 2011 study at Tel Aviv University in Israel showed that even a network of good friends at work is associated with a lower risk of dying from any cause.2 Shirom, Arie; et al. “Work-based predictors of mortality: A 20-year follow-up of healthy employees.” Health Psychology. May 2011. Accessed 29 January 2015. http://psycnet.apa.org/index.cfm?fa=search.displayRecord&id=384D2A42-EB0A-3582-D4A8-882AD466415F&resultID=1&page=1&dbTab=pa&search=true And while group support is wonderful, a friend may not be there for you with the same level of dedication as your spouse when you’re desperately craving a cigarette at 1 a.m. or really don’t want to get up to go for that jog before the sun has risen.

So it would seem that if you are ready to make some changes for the good of your health, you might want to have a serious discussion with your significant about taking it on together. Eliminating those bad habits and picking up some new better ones can help you enjoy a longer and fitter life as you grow old with one another.