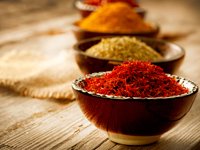 You don’t need to watch National Lampoon’s Animal House1http://www.youtube.com/watch?v=m8psQi7ScQQ if you crave a gross-out experience. Instead, just read the Food and Drug Administration’s recent 213-page report on “Filth and Pathogens in Spices.”2 “Draft Risk Profile: Pathogens and Filth in Spices.” Center for Food Safety and Applied Nutrition, Food and Drug Administration. 2013. http://www.fda.gov/downloads/Food/FoodScienceResearch/RiskSafetyAssessment/UCM367337.pdf You’ll discover that if you consume spices regularly, you’re also getting a fair dose of insect parts, rodent droppings, and maybe even salmonella. That’s right: the oregano you just sprinkled over your marinara might make the pasta taste delicious, but there’s a reasonable chance that it came complete with rat feces and bug parts.

From 2007 to 2009, the FDA inspected more than 2800 shipments of spices from abroad. The inspectors found that 12 percent of the spices contained “filth,” – in other words, insects or insect parts, rodent fur, feces, and other miscellaneous contaminants such as rubber bands. According to the report, “Nearly all of the insects found in spice samples were stored product pests, indicating inadequate packing or storage conditions. The presence of rodent hair in spices [without the hair root attached, ed] is generally indicative of contamination by rodent feces.”

Hold your gag reaction. While rodents and insects may be undesirable additions to your salt and pepper, it’s the salmonella and other bacteria that pose a larger threat. The inspectors found that seven percent of the samples were infected with salmonella, and others had traces of bacillus and other harmful bacteria.3 “Imported spices at increased risk for salmonella, other contaminants.” 31 October 2013. Daily News. 31 October 2013. http://www.nydailynews.com/life-style/health/imported-spices-increased-risk-salmonella-contamination-fda-article-1.1502922 That’s two times the rate of contamination found in other foods inspected. In fact, the FDA found 80 different strains of salmonella in the spices evaluated. Salmonella infection causes severe intestinal problems, killing 400 people annually in the US and sending 1.2 million to the hospital.

In spite of the high percent of contamination, the FDA has only recorded 14 spice-related salmonella outbreaks involving 2000 people between 1973 and 2010. The Agency attributes the relatively low incidence rate to the fact that people typically use only tiny amounts of spices—not enough to trigger disease, especially in a healthy immune system. Also, spices usually get cooked in whatever food they’re added to, and cooking kills the salmonella bacteria.

On the other hand, it’s quite possible—even likely—that consuming a small amount of salmonella-laced spice might be just enough to cause some stomach distress that doesn’t blossom into full-blown salmonella. Plus, if you get salmonella and the doctor asks what you ate, you probably won’t bother to name the spices you consumed. Tracing an outbreak back to a spice may be a tricky thing. If tomato sauce triggers a salmonella scare, authorities certainly would blame the tomatoes before the spices—especially if both items were contaminated (and that’s not a farfetched scenario).

In case you’re wondering which spices have the worst profile, leaf-based seasonings like basil, parsley flakes, and oregano lead the pack in contaminants. Root-based seasonings like turmeric and ginger had a particularly high contamination rate too. The inspectors also identified salmonella on poppy seeds, black pepper, cayenne from Japan, and allspice from Turkey. The lowest contamination rates show up on spices derived from bark or flowers, like cinnamon and saffron. Imports from Mexico are the most likely to be contaminated, with Indian spices next. In fact, 14 percent of the Mexican imports showed salmonella contamination, as did 11 percent of those from India. The contamination rate was less than one percent for Canadian spices—the lowest rate of all the imports. Then again, whole and ground spices are approved for irradiation in Canada, which makes that 1% figure a bit more interesting.

Spice contamination has been around a very long time. In fact, 30 years ago, the FDA conducted a similar study and found equivalent results. You can look at that fact in a glass half-full way—at least the problem hasn’t gotten any worse. On the other hand, it’s a bit disheartening that in 30 years there hasn’t been an iota of improvement.  Why bother doing the studies if they don’t inspire corrective action?

Spices have caused some serious public health issues over the years, with the worst being a 2010 salmonella outbreak caused by red and black pepper in Italian deli meat. One solution seized on by the spice companies to avoid such scenarios has been to irradiate seasonings coming into the country before they get packaged. There’s heated debate about the health dangers resulting from this irradiation—but suppliers insist that it’s the best way to prevent major outbreaks.4 Hanselman, John B. The Unknown Dangers of Food Irradiation.” 01 January 2005. Alive. 31 October 2013. http://www.alive.com/articles/view/16762/the_unknown_dangers_of_food_irradiation They point out that many of the spice-related outbreaks originate from spices that did not undergo the irradiation process. In any event, irradiation won’t do anything about mouse drool or rat poop in the poppy seeds; it simply kills bacteria (and even at that, the inspectors found salmonella contamination on spices that supposedly had been irradiated).

By the way, if you hope you can avoid foodborne illness by buying organic, think again. Both organic celery seed and fenugreek have caused salmonella outbreaks within the past few years. 5 Shute, Nancy. “The (Un)Usual Culprit: Why Organic Spices Aren’t Always Safe.” 26 January 2012. The Salt. 31 October 2013. http://www.npr.org/blogs/thesalt/2012/01/26/145890058/the-un-usual-suspect-why-organic-spices-arent-always-safe

It seems obvious that the best solution is to grow your own seasonings to the extent possible. Certainly leafy spices are easy to grow indoors or outdoors, in the ground, or in a container. Otherwise, season your food before you cook it,  remember to take probiotics and digestive herbs to keep your system in balance, and have a some natural health remedies such as a colon detoxifier and a natural anti-pathogenic formula on hand, just in case.