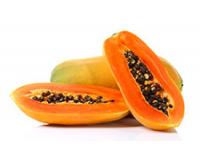 The Natural Health Benefits of Papain

Papain is a proteolytic enzyme found in concentrated amounts in unripe papaya fruit. It is similar to bromelain (found in pineapple) and has many of the same health benefits. However, there are a few medicinal traits unique to papain that can help improve the body’s overall health.

For instance, if you cook with red meat, you may know that papaya is a well known fruit used as a tenderizer. This is because the enzymes in the fruit help break down the proteins in the meat. The papain in papaya does the same thing in the body. However, what makes papain a bit more special is that it doesn’t require a certain level of acidity or alkalinity within the body.

This is of vital importance for those with enzyme deficiency problems, as well as for those with low hydrochloric acid output in the stomach. It is important to understand that pepsin produced in the stomach to aid in protein digestion is activated only in an acid medium. This requires a healthy output of hydrochloric acid that is insufficient in many people—especially as they age. Since papain does not require hydrochloric acid, many people with digestive problems will be helped by daily supplementation with papain. In fact, you’ll often find papain in digestive enzyme formulas for this reason.

While papain is certainly effective as a digestive enzyme, it is also just as effective as a systemic enzyme. If papain is taken between meals, it makes its way into the bloodstream where it helps reduce pain and inflammation, as well as fluid retention following trauma and surgery. In fact, studies have shown that papain possesses strongly marked anti-inflammatory activity, and this ability is no less than that of the pharmaceutical drugs butadion and indomethacin. This is why you will find it as an ingredient in Jon Barron’s own systemic proteolytic enzyme formula, pHi-Zymes®.

Its anti-inflammatory properties have also been shown to be helpful in reducing joint and prostate irritation. Other trials have shown papain to have promise in helping relieve pain and swelling associated with lower back pain.

In addition, papain is also used topically to help treat skin wounds, burns, rashes, bug stings, bed sores, and skin ulcers. In fact, traditional Hawaiian cultures made poultices out of the skins of papaya to treat some of these same conditions.

Even more, papain has been used medicinally for a variety of other issues including:

While the enzyme is found in the unripe fruit, for medicinal doses, your better choice is probably to find papain mainly as a pill or powder supplement.