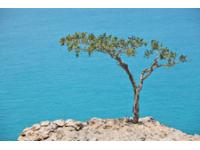 Boswellia serrata, or frankincense, has been used for thousands of years for its ability to manage inflammatory disorders and is considered a staple of Ayurvedic medicine. It is procured from the sap of the Boswellia tree, a native Indian plant. It has also been used to treat arthritis, diarrhea, and pulmonary disease. Also, when used as an incense, boswellia resin is reported to relieve depression and anxiety.

Interestingly, its medicinal use might be attributable to elephants, as it’s said that ancient Ayurvedic healers discovered its benefits by watching elephants eat boswellia. Since elephants are known for their long life and health, it is thought that the healers wanted to bring the health benefits of the tree to their patients.

Over the last few years, boswellia has attracted much attention in the world medical community because it possesses anti-inflammatory properties that are equal to prescription medications without the unpleasant/dangerous side effects. For example, research conducted in India found that an extract of boswellia dramatically relieved rheumatoid arthritis symptoms. Even better, boswellia was less toxic and more potent than the standard drug of choice at the time, benzoyl hydrotropic acid.

In addition, it appears that boswellia can inhibit the breakdown of connective tissues caused by tumor necrosis factor-alpha, a potent inflammatory agent in the body.

And finally, it appears that boswellia has the ability to modulate the immune system and inhibit inflammatory activity, thereby helping with a number of autoimmune conditions, including rheumatoid arthritis.

Or to put it in simpler terms, the boswellic acids in boswellia seem to have the ability to suppress the proliferating tissue found in inflamed areas of the body and prevent the concomitant breakdown of connective tissue. Proliferative inflammation is an inflammatory reaction in which the distinguishing feature is an actual increase in the number of reticuloendothelial macrophages—thus continuing the inflammatory response and the breakdown of healthy tissue.

In addition, boswellia has been found to improve blood supply to the joints and restore the integrity of weakened blood vessels, again with no side effects as seen with the traditional drugs of choice.

These are some of the reasons you’ll find boswellia as an ingredient in Jon Barron’s cartilage regeneration & joint health Supplement, Triple Jointed.

Why Use Boswellin® PS In Supplements

Until recently, research on boswellia has focused almost exclusively on the boswellic acids, particularly AKBA (acetyl-11-keto-beta-boswellic acid) as the most active component in boswellia, and most supplements have looked to maximize that component. However, more current research has indicated that some of the water soluble polysaccharides in boswellia are also essential components in that they initiate and support the anti-inflammatory activity, whereas the lipid-soluble boswellic acids help to provide a sustained action. In fact, a particular boswellin polysaccharide extract known as Polysal has demonstrated a dose dependent anti-inflammatory potential, similar to the boswellic acids.

For this reason, Boswellin® PS now stands out as the boswellin ingredient of choice.