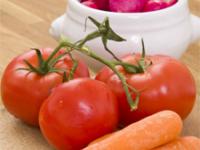 Beta-carotene is converted by the body into vitamin A (retinol) as needed to strengthen the immune system and promote healthy cell growth. In addition, beta-carotene is a potent antioxidant, offering particular benefits to the immune system and the lungs. (Note: In nature, beta-carotene always comes as part of a carotenoid complex, not in isolation. There are more than 400 different carotenoids in addition to beta carotene in a single carrot, for example.)

Other beta-carotene benefits have been shown to include inhibiting proliferation of various types of cancer cells such as those affecting the lungs, stomach, cervix, breast, bladder, and mouth. In fact, some studies suggest that eating four or more daily servings of beta-carotene rich foods may protect against heart disease or cancer. These foods have also been proven to protect against atherosclerosis, cataracts, macular degeneration, and other major degenerative disorders.

Numerous studies have been done on the potential health benefits of beta-carotene. Some of the findings include:

Keep in mind that there “may” be some risks to over supplementing with beta-carotene. According to University of Maryland Medical Center, “beta-carotene supplements may increase the risk of heart disease and cancer in people who smoke or drink heavily. Those people should not take beta-carotene, except under a doctor’s supervision.” But as Jon Barron has pointed out, the studies used as the basis for that conclusion evaluated synthetic beta carotene, not natural beta carotene. That said, beta-carotene supplements may interact with certain drugs, such as statins and mineral oil.