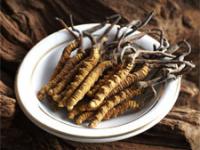 What is Cordyceps? Let’s take a look at this Chinese fungi known to do everything from supporting a healthy immune system to increasing endurance in athletes to helping rebuild the body after long-term illness.

Many of the compounds found in medicinal mushrooms like reishi, maitake, and cordyceps mushrooms are classified as host defense potentiators: it is believed that combinations of these compounds target and strengthen the human immune system, as well as aid in neuron transmission, metabolism, hormonal balance, and the transport of nutrients and oxygen. Through a host-mediated (T-cell) immune mechanism, they help the body regulate the development of lymphoid stem cells and other important defense responses.

This week we’re taking a closer look at one of these medicinal mushrooms, cordyceps. Cordyceps has properties similar to those of ginseng and has been used to strengthen and rebuild the body after exhaustion or long-term illness. It is one of the most valued medicinal fungi in all Chinese medicine, among the most potent, and also one of the most expensive (costing as much as $249 per kilogram). It has been used traditionally for impotence, neurasthenia, and backache.

Cordyceps is widely employed to treat upper respiratory problems, impotence, and weakened immune systems, and also by athletes to increase endurance. Recent research with extracts of Cordyceps has yielded a protein-bound polysaccharide with activity against tumors, as well as being capable of upregulating macrophage activity,1 and inducing the apoptosis (cell death) of human leukemia cells.2

Aside from its health benefits, cordyceps fungi has a very interesting history. In China it is known colloquially as chongcao, which means, “worm-grass.” It was formerly used as a popular medicinal food, often cooked with chicken or duck. However, due to it’s high expense, most people cannot afford it except in medicinal quantities. Because of this high expense, among the wealthy and powerful in China, cordyceps is consider quite the prestigious gift and is seen as a status symbol.3

Due to the rarity and high prices of the wild collected variety, attempts have long been made to cultivate Cordyceps. After much early frustration in attempted cultivation, commercially viable methods were finally achieved in the late 1970’s. By the mid 1980’s, the majority of Cordyceps available in the world’s marketplace was artificially cultivated. Because of the development of these modern biotechnology- based cultivation methods, the availability of this previously rare health supplement has greatly increased in the last twenty years.