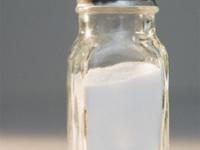 In today’s market, we now have two distinct choices when it comes to salt: unrefined and refined. Unrefined salt (sea salt) is 97.5% sodium chloride (with up to 14% of that being moisture content in some brands) and 2.5% consisting of some 50+ other trace minerals. Refined salt is also 97.5% sodium chloride, but the other 2.5% no longer consists of trace minerals, but rather, chemical additives.

Unrefined salt is at heart sea salt, but can come from two sources: either freshly dried from the sea, as in Celtic Sea Salt, or mined from ancient inland ocean beds as in the Himalayan Salt and Real Salt brands. In either case, the salt is a naturally occurring complex of sodium chloride, major minerals such as calcium and magnesium, and a complete complement of essential trace minerals. This is the form of salt the body recognizes and is designed to use.

Refined salt (or iodized salt), on the other hand, is a manmade creation of the last century that contains anti-caking chemicals and added iodine. Iodine was added for people who lived inland and at one time did not benefit from natural iodine found in seafood. Iodized salt benefits aren’t to be overlooked: the added iodine addresses iodine deficiency, which affects two million people around the world and is the leading preventable cause of mental retardation. Truth be told, all refined table salt is actually sea salt at heart, either refined from the sea or found in salt mines created by ancient seabed deposits known as halite. Refined salt is processed at high temperatures, altering the molecular structure of the salt and removing the beneficial trace minerals. The human body doesn’t like it.

Unfortunately, you can’t rely on fruits and vegetables any more for your trace minerals: they just don’t contain them. Even organic fruits and vegetables are largely deficient, unless the grower goes to the extra expense of remineralizing the soil. In the end, you have to supplement either with unrefined sea salt or with a trace mineral supplement. Of course, we can all agree on one thing: a healthy diet is a diet in moderation.

Refined salt addiction is perhaps as prevalent and subtly dangerous in modern society as drug addiction, poor diet, and a sedentary lifestyle. Excess refined salt increases appetite and decreases bone density. The bottom line is unrefined natural sea salt is as essential to life as oxygen, water, vitamins, proteins and essential fats — in conscious moderation of course. The health benefits of unrefined salt must not be overlooked based on an overgeneralization in salt guidelines.