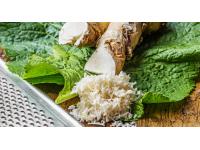 While the origins of the horseradish plant may be unknown, this plant has quite the history attached to it. It is mentioned in Greek mythology and was considered to be worth its weight in gold by the Delphic Oracle. It is mentioned in ancient medicinal texts, and there is even a mural with the plant in it in Pompeii. It also has some presidential history, as both George Washington and Thomas Jefferson mention horseradish in garden accounts.

For many, horseradish is known as a spicy condiment typically for meats and sandwiches, but it also has a number of medicinal benefits. Nutritionally, it is low in calories, and a serving contains about 17 to 20% of the daily Vitamin C recommendation. It also contains potassium, folate, calcium, and has small amounts of B-complex vitamins.

TWEET #didyouknow One serving of horseradish contains about 17-20% of the RDV of vitamin C! @BaselineHealth

Horseradish as a Natural Antibiotic

Horseradish contains volatile oils that are similar to those found in mustard. These include glucosinolates (mustard oil glycosides), gluconasturtiin, and sinigrin, which yield allyl isothiocyanate when broken down in the stomach. In test tubes, the volatile oils in horseradish have demonstrated antibiotic properties, which may account for its effectiveness in treating throat and upper respiratory tract infections. These antibiotic properties are one of the reasons you’ll find horseradish as an ingredient in Jon Barron’s Super ViraGon formula.

Horseradish as a Potential Cancer Remedy

In addition to providing antibiotic benefits, the glucosinolates in horseradish may have cancer fighting properties as well. There has been some promise shown in helping detoxify cancer-causing chemicals in the liver and possibly slowing the growth of cancerous tumors. In laboratory experiments published in the “European Journal of Nutrition,” the compounds were shown to change cellular activity and stop cancer cells from dividing and causing them to die.

Horseradish as an Immune Booster

Horseradish is also a stimulant that quickens and excites the body. It can energize the body, helping it to marshal its defenses against invading viruses. In addition, horseradish can help carry blood to all parts of the body. And it is a diaphoretic and thus helps raise the temperature of the body, which increases the activity of the body’s immune system. Yet another reason Jon Barron includes it in his Super ViraGon formula.

If that’s not enough, horseradish may also be helpful in treating or relieving symptoms for:

How to Use Horseradish

Horseradish should always be used fresh, as it loses its potency and medicinal effects if it is cooked or stands too long after being grated. However, grating it, mixing it with apple cider vinegar, and storing it in an airtight container will preserve its freshness.

& Infectious DiseasesColdsFlusHerbal Remedies and Their Uses