Statins and the Tooth Fairy | Dental and Heart Health

Statins and the Tooth Fairy 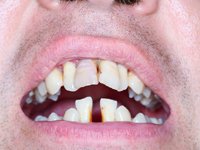 Imagine that you audition five people to sing at your party. One of them, Stan, forgets the words to the song and goes completely out of key. Plus, he steps on your foot and breaks your little toe on his way down the aisle. “You didn’t get the job,” you tell him. Undaunted, he insists you should hire him because he can do many other things, too, like restore your car, give you a Botox treatment, and train your dogs.

Like can’t-take-no Stan, cholesterol-lowering statin drugs refuse to go away even though studies show that they do approximately zilch to prevent heart attack or prolong life for those without preexisting heart disease. (Jon Barron has written in the past about why lowering cholesterol does little to prevent heart disease.) The fact that the pills barely work and that they come with a host of side effects doesn’t seem to deter doctors, who continue to prescribe them for high cholesterol to the tune of $29 billion a year in profits1 Statin Nation. StatinNation.com. 3 October 2013. http://www.statinnation.net . Currently, about 40 million people in the US take statins to control their cholesterol instead of natural heart health remedies, and that’s in spite of their considerable side effects.  Perhaps because the negative studies keep emerging, though, the pharmaceutical community has been scrambling to find other reasons to keep the statin business alive. Now, it looks like they might have hit gold–or more likely a gold crown.

A new study out of Massachusetts General Hospital in Boston, just published in the American Journal of the College of Cardiology, claims that statins may help to reduce periodontal disease.2 Neale, Todd. “Statins for Inflamed Gums?” 3 October 2013. Med Page Today. 3 October 2013. http://www.medpagetoday.com/Cardiology/Atherosclerosis/42034 Given that over half the population has gum problems, that’s a huge potential market. The study included 83 people at risk for heart disease. Half of them were given low doses (10 mg daily) of a type of statin known as atorvastatin, the generic name for Lipitor. The other half of the participants took very high doses (80 mg daily) of the same drug. A normal daily dose is between 20 to 40 milligrams.

To monitor the dental health effects of the statins, the researchers gave all participants PET and CT scans both at the beginning of the 12-week study, and at the end.3 Bacalar, Nicholas. “Statins May Reduce Gum Disease Risk.” 2 October 2013. New York Times Health.. 3 October 2013. http://well.blogs.nytimes.com/2013/10/02/statins-may-reduce-gum-disease-risk Sure enough, at the conclusion, the group taking the high dose of statins showed a 43 percent reduction in gum inflammation–not to mention probably a 4,300 percent increased risk of cancer from all that radiation exposure. (Four scans in three months equates to barbecuing the body with radiation. But then again, at least those participants now have healthier gums…as long as they keep taking the statin drugs.)

The results excited the researchers, who wrote, “Given the concomitant changes observed in periodontal and arterial inflammation, these data raise the possibility that a portion of that beneficial impact of statins on atherosclerosis relate to reductions in extra-arterial inflammation, e.g., periodontitis.”  In other words, your inflamed gums may be causing atherosclerosis, and taking very high doses of statins can remedy that problem. The implication, of course, is that using statins to heal atherosclerosis via your gums will improve your odds for living longer and reduce your cardiovascular risk, but again, new theories aside, previous studies don’t support that contention.

And by the way, although nobody seems to be making a big deal out of the fact, reading between the lines indicates that at lower doses, the statins did nothing to help either gums or systemic inflammation. While statins seemed to perform periodontal magic at a dosage of 80 milligrams daily, it’s important to note that such high doses bring considerable risks. A Canadian study a few months ago, for instance, found that at any dosage over 40 milligrams daily, statins increase the risk of kidney damage by a third.4 Hope, Jenny. “Stronger doses of statins may increase risk of kidney damage by a THIRD.” 19 March 2013. Mail Online. 3 October 2013. http://www.dailymail.co.uk/health/article-2295971/Stronger-doses-statins-increase-risk-kidney-damage-THIRD.html

As we’ve written before, half of all statin users experience some sort of side effects. In addition to kidney problems, those effects can include liver damage, permanent structural damage to muscles, severe memory loss, nerve damage, trouble talking, nausea, and vertigo. Vytorin, which coincidentally is the statin drug doctors tend to move patients to if they have side effects from other statin drugs, is linked to a fifty percent increased risk of cancer. Research also has shown an unequivocal increase in diabetes risk among those taking Lipitor, Crestor, and Zocor.

Nobody is recommending yet that doctors prescribe statins specifically for gum problems–not without more studies–although it doesn’t take a pharmaceutical executive to see where the research is headed. It’s part of the crusade to prescribe statins to virtually everyone over the age of 65. A study this year, in fact, did conclude that all seniors should be on the drugs, even though the liner notes indicated that the drugs don’t reduce the risk of death from cardiovascular disease.5 Reinberg, Steven. “Should Everyone Over 65 Take a Statin?” 28 August 2013. WebMD. 4 October 2013. http://www.webmd.com/heart-disease/news/20130828/should-everyone-over-65-take-a-statin You’ve got to wonder what’s going on. Or maybe you don’t.

A closer look at the periodontal study offers clues. The research was funded by pharmaceutical giant Merck, and two of the researchers are on the Merck payroll. Ironically, Merck makes not only the cholesterol drugs Lipitor and Zocor, but also, the osteoporosis preventative Fosamax. If you recall, a few years back, Fosamax was in the spotlight when researchers found it caused jaw death–the extreme end result of periodontal decay. Just think: Merck has found a way to kill the jaw with one product and to cure it with another. There’s a kick in the teeth for you.

And if you’re interested in preventing periodontal disease without killing yourself at the same time, read what Jon Barron has to say about: