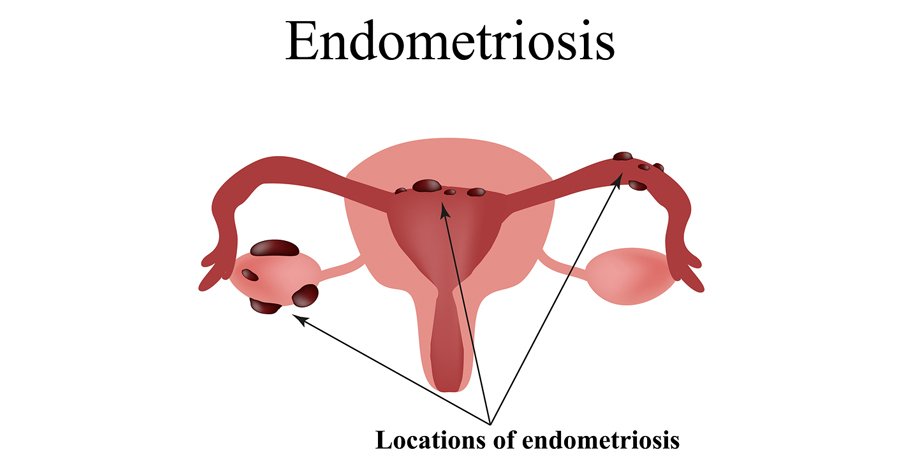 Endometriosis is a fairly common condition generally diagnosed when a woman is in her 20s or early 30s. It can be very painful, particularly during menstruation and while having sex. The disease is already associated with fertility problems, excessive menstrual bleeding, fatigue, and bloating. And now, that list grows a little longer. New research suggests that having endometriosis may increase the chance that a woman will develop cardiovascular disease too.

The study, which took place at Brigham and Women’s Hospital in Boston, Massachusetts, found that the risk of heart disease for women diagnosed with endometriosis is especially magnified in those women who are 40 or under.1 Mu, Fan; et al. “Endometriosis and Risk of Coronary Heart Disease.” Circulation: Cardiovascular Quality and Outcomes. 29 March 2016. Accessed 3 April 2016. http://circoutcomes.ahajournals.org/content/early/2016/03/29/CIRCOUTCOMES.115.002224.abstract?sid=5ea442d9-671f-4f8e-a617-d46b5edd5173 The subjects were 120,000 women who were tracked for a period of 20 years. Close to 12,000–or roughly 10 percent of the participants–were determined to have endometriosis.

The scientists analyzed the medical records of all of the volunteers and discovered that the overall heart disease rate in those under the age of 40 was 21 cases per 100,000 women. However, when they isolated those in that same age group with endometriosis, they found that the rate more than tripled to 65 cases per 100,000 women. And the bad news didn’t end there. The subjects with endometriosis were 52 percent more likely to have a heart attack, 91 percent more likely to experience angina (chest pain that is typically a symptom of heart disease), and have a 35 percent greater risk of being a candidate for a surgical procedure or placement of a stent to clear blocked arteries. The risk may not seem to be large at 65 per 100,000, but when you extrapolate it out to the 50 million women between the ages of 15 and 40 in the US, it works out to over 32,000 women–which is more than large enough.2 “Age and Sex Composition: 2010.” US Census. May 2011. (Accessed 4 Apr 2016.) http://www.census.gov/prod/cen2010/briefs/c2010br-03.pdf

How is a reproductive disorder associated with a variety of cardiovascular issues? It actually isn’t that far of a leap. A 2007 study at the University of Sao Paulo in Brazil showed that a hallmark of endometriosis is systemic inflammation,3 Podgaec, S.; et al. “Endometriosis: an inflammatory disease with a Th2 immune response component.” Human Reproduction. 18 January 2007. Accessed 4 April 2016. http://www.researchgate.net/profile/Mauricio_Abrao/publication/6567502_Endometriosis_an_inflammatory_disease_with_a_Th2_immune_response_component/links/00b495241d731806d9000000.pdf and inflammation is strongly believed to be a factor in the development of heart disease. What is unclear, however, is whether one condition starts the ball rolling and makes the chances of developing the other disease higher or if the same problems within the body simply make both endometriosis and cardiovascular disease more likely to occur.

The findings of the current study were reinforced by the large population sample included and the long-term nature of the investigation. Plus, it turned out to be a very accurate slice of females involved, since it is estimated that 10 percent of females of reproductive age have endometriosis, which was the same percentage seen in the participants of this research.

While there is no “medical” cure for endometriosis, women under a doctor’s care with this condition can take action to alleviate their painful symptoms. Often, doctors will recommend surgery to remove the growths of uterine tissue that have migrated from this organ to other parts of the pelvic region and occasionally beyond. Even performed laparoscopically through small incisions, this is still a major procedure requiring anesthesia and recovery time with risks that include infection, bleeding, scar tissue formation, and organ damage. And it only addresses certain symptoms of endometriosis rather than the cause of the disorder, which means it may recur and another surgery will probably be suggested.

Instead, women with endometriosis should strive to reach a healthy weight since excess fat is linked to an increase in estrogen that could worsen the condition. In addition to focusing on a nutritious diet that is low in fat and calories, regular exercise is also essential. Not only does it help you lose extra weight, but daily activity has been shown to alleviate pain as well as to boost your mood. And all of these natural ways to improve the symptoms of endometriosis will help lower your risk of developing cardiovascular disease as well, for a true win-win situation.

And you also just might want to read Jon Barron’s article on how the regular use of a natural progesterone crème can balance out excess estrogen in the body–thus eliminating the primary cause of endometriosis.