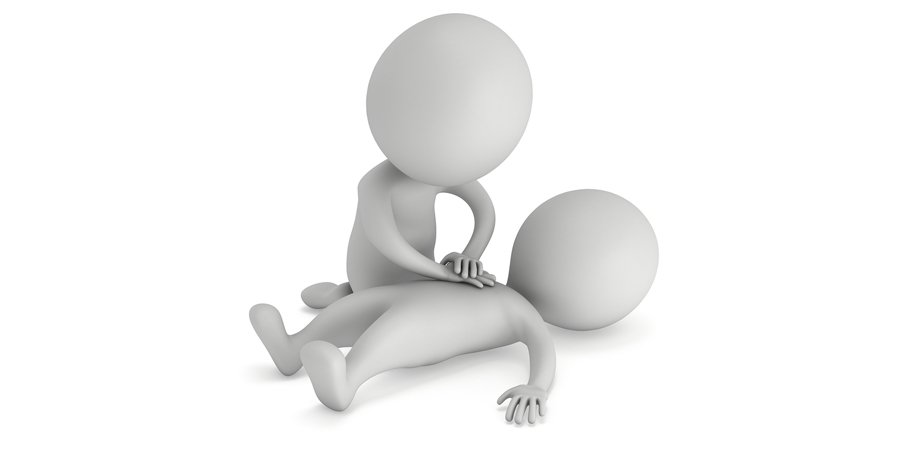 You’ve probably never stopped to consider who you would want to come to your aid if you experienced sudden cardiac arrest while out in public. After all, as long as they know what they’re doing, your odds of pulling through are pretty good, aren’t they? Maybe, maybe not. It turns out there just may be another determining factor beyond expertise. According to new research, you might be much more likely to live if your rescuer is on the larger side.

The study, which took place at the University of Castilla-La Mancha in Albacete, Spain, found that people may have a greater chance of surviving cardiac arrest if the person performing cardiopulmonary resuscitation (CPR) on them is heavier and has greater upper body strength.1 Lopez-Gonzalez, Angel; et al. “Muscular fitness as a mediator of quality cardiopulmonary resuscitation.” The American Journal of Emergency Medicine. 15 June 2016.  Accessed 6 July 2016. http://www.ajemjournal.com/article/S0735-6757(16)30274-1/abstract The subjects were 63 male and female college students who were provided with a 30-minute training session in basic CPR skills.

Two days after their training, the participants were required to perform CPR on a test mannequin. It involved using chest compressions in which they had to place pressure at the center of the chest by pushing down as hard and quickly as possible. This is a valuable maneuver for patients in cardiac arrest–which is characterized by a sudden electrical malfunction of the heart that causes it to stop beating–since it helps blood circulate to the heart and brain until the heart can be restarted. The volunteers were asked to execute the chest compressions for 20 minutes or until they reached exhaustion.

The researchers took height and weight measurements to obtain a body mass index (BMI) for each of the subjects. Nearly 44 percent were found to be underweight, close to 52 percent were deemed normal weight, and the remaining five percent were deemed overweight or obese. Their upper body strength was determined by analyzing the force of their grip strength in each hand when using a handgrip. The chest compressions they performed were then evaluated based on how fast they were conducted, if they were done on the correct location of the chest, the depth of the compressions, and the relation between compression and rest phases.

When all of the data was analyzed, the scientists found that the underweight participants scored lower on the various compression parameters compared to their peers who were normal weight or overweight, which might lead you to believe that men are automatically better at CPR than women. However, what some of the participants lacked in weight was often mitigated in those with greater upper body strength. The subjects with high–or even medium–muscle strength earned better scores in the areas of compression depth and sufficient compression versus their counterparts who had little muscle strength.

The study certainly has some major limitations to keep in mind, though. First of all, the population sample included was very small in size and lacked diversity in age. Plus, the volunteers were hardly representative of the populace at large with 44 percent of them underweight. In the United States, only 1.7 percent of people 20 and older have a BMI of less than 18.5 according to the Centers for Disease Control and Prevention.2 Fryar, Cheryl D. and Ogden, Cynthia L. “Prevalence of Underweight Among Adults Aged 20 and Over: United States, 1960-1962 Through 2011-2012.” Centers for Disease Control and Prevention. 19 September 2014. Accessed 7 July 2016. http://www.cdc.gov/nchs/data/hestat/underweight_adult_11_12/underweight_adult_11_12.htm That would make it considerably less likely to be faced with a rescuer who is actually underweight.

In addition, the results were based on only the briefest of instruction in CPR undergone 48 hours earlier. While those performing CPR on the fly in an emergency might not even have that much instruction, training for a first responder is typically more comprehensive. They also have lots of field experience in which they’ve honed their technique. And speaking of field experience, this investigation took place in a laboratory setting, quite different from the real-world occurrence of a cardiac arrest, so it’s entirely possible that other factors would influence the outcome if this took place in a restaurant or office building instead.

That said, if you do experience sudden cardiac arrest or similar problem, it would be more confidence inspiring–assuming you are conscious during the experience–if your rescuer was well trained, fit, and possessed a somewhat muscular physique. Just keep in mind that anyone can fit that bill, no matter their age or gender. What’s important is their skill and upper body strength. Personally, I’d rather have Serena Williams come to my rescue than Jonah Hill–assuming, of course, that Jonah hadn’t received extensive training!