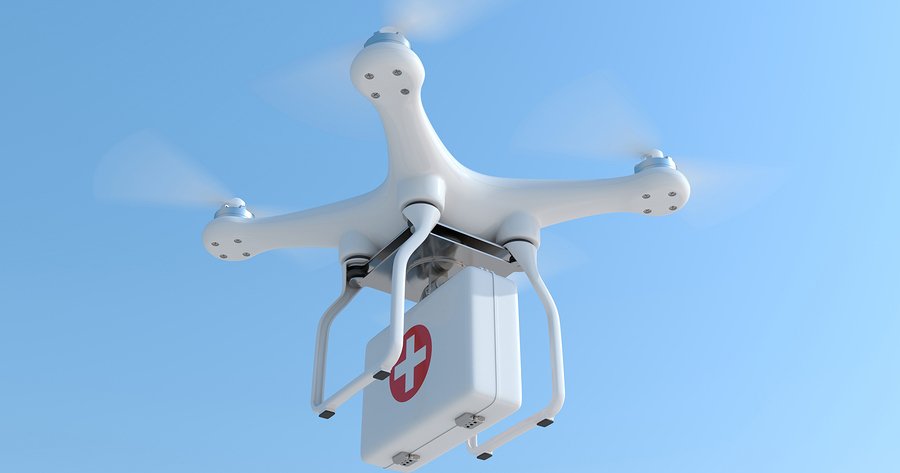 Drones are big business these days. The FAA projects that 2.5 million of the unmanned aircraft will be sold in the US by the end of the year, with profits topping $8 billion.1 “THE DRONES REPORT: Market forecasts, regulatory barriers, top vendors, and leading commercial applications.” 10 June 2016. Business Insider.16 June 2016. http://www.businessinsider.com/uav-or-commercial-drone-market-forecast-2015-2 By 2020, projections show seven million in circulation, with commensurate revenues.2 Levin, Alan. “U.S. Says 7 Million Drones Will Take to the Skies by 2020.” 24 March 2016. Bloomberg Technology. 16 June 2016. http://www.bloomberg.com/news/articles/2016-03-24/u-s-says-7-million-drones-will-take-to-skies-annually-by-2020 More than half of those drones belong to home hobbyists who enjoy flying the things for fun. The rest are owned by industry and the government.3 Agence France-Presse. “FAA says number of drones in the US will reach 7 million by 2020.” Raw Story. 25 March 2016. http://www.rawstory.com/2016/03/faa-says-number-of-drones-in-the-us-will-reach-7-million-by-2020/

In spite of burgeoning sales, drones remain a controversial technology. Many argue that they’re unsafe and can be used for unethical purposes. They can cause plane accidents, run wild and hit pedestrians, be used for unsavory purposes such as drug delivery, become illegal spying machines, be used to efficiently commit murder. On the other hand, they can be employed for positive purposes, particularly in the realm of healthcare.

To prove that point, the United Arab Emirates initiated an annual contest in 2015 dubbed ‘Drones for Good,’ with a $1 million cash prize for the best drone proposal. The contest literature states, “The UAE Drones for Good Award is dedicated to transforming the innovative technologies behind civilian drones into practical, realizable solutions for improving people’s lives today.”4 http://www.dronesforgood.ae/ Of the 800 entrants from 57 countries the first year, 20 finalists were chosen. Their ideas included health-related applications such as guide-drones for blind people, anti-malarial drones to target mosquitos, and drones for delivering organs to people in need of transplants.

The organ-delivery idea, developed by four engineering grad students at the University of A Coruna in Spain, grew out of the fact that getting donor organs to people in need in a timely fashion is a real problem, because organs don’t remain viable for more than a few hours.5 Wapner, Jessica. “Medical Transport Drones Could Transform Healthcare in Crowded Cities.” 25 January 2016. Newsweek. 16 June 2016. http://www.newsweek.com/2016/02/05/india-organ-transplant-drones-419013.html    They must be transplanted soon after harvesting, or they become useless. For instance, a donor heart only lasts from four to six hours, meaning that if the donor and recipient aren’t in the same hospital, delivery by current methods usually isn’t fast enough.  Even if the recipient and donor are in the same city, it may be impossible to get donor organs from one hospital to another fast enough when traffic isn’t moving. This has proven to be problematic particularly in places like India, where overcrowding in cities can lead to stopped traffic that lasts for hours.

The organ-delivery scheme didn’t win the million-dollar prize, but it piqued the interest of the Chinese company Ehang, which saw the commercial potential and drew up fast plans to manufacture medical transport drones. Shortly thereafter, the US company Lung Biotechnology (a subsidiary of United Therapeutics), ordered 1000 of the things to be put in use over the next 15 years, pending FAA approval.6 Popper, Ben. “A biotech firm wants to use drones to deliver pig organs to humans.” 4 May 2016. The Verge. 16 June 2016. http://www.theverge.com/2016/5/4/11582910/ehang-lung-biotechnology-drone-deliver-organs The plan is for Lung Technology to grow transplantable organs in pigs, and then to use the drones to deliver them.

The thing is, the pig organ-growing facility doesn’t exist at present. There’s also the fact that the FAA needs to approve the drones once they’re ready, and the Food and Drug Administration needs to approve the non-existent pig-organ harvesting operation, which explains the 15-year timetable. They might need even more time given the probability that there will be some controversy about whether it’s okay to use pig parts in humans or to breed pigs specifically for that purpose by injecting pig embryos with human stem cells.7 Fergus Walsh. “US bid to grow human organs for transplant inside pigs.” BBC News June 6. 2016. (Accessed 17 Jun 2016.) http://www.bbc.com/news/health-36437428 Such concerns don’t seem to be deterring the entrepreneurs, however.

According to the Ehang company, “[We plan] to station the MOTH rotorcrafts outside of the organ manufacturing facilities, and to use preprogrammed flight plans to hospitals and recharging pads within the MOTH radius so that the manufactured organs can be delivered within their post-production window of viability.”

The drones are specially fitted for carrying organs, with a weight under 44 pounds and flight speed averaging around 56 miles per hour. They also have an ultra-lightweight cooling mechanism to ensure that organs are kept beneath 39 degrees Fahrenheit, which is essential. Most cooling methods, including ice, would add too much weight, but the fancy engineering required plus the sophisticated navigation system drive up the price-tag. The cost for two drones plus a base station, piloting consoles, 45 containers for carrying organs, staff training, and sanitation supplies using ultraviolet radiation, will be around $2.7 million.

While Ehang and Lung Biotechnology hash out their plans, other groups are sponsoring contests to find useful ways to put drones to healthcare work, with one offering $117,000 for a design that will offer “a solution to transport urgent, medical content to people and places that are traditionally difficult to reach.” It’s estimated that about two billion people across the globe can’t get needed medical products because they live in remote areas, and that leads to the death of at least three million children under age five annually.8 Crothers, Brooke. “These drones will deliver blood and supplies across Rwanda.” 13 May 2016. Technology Fox News. http://www.foxnews.com/tech/2016/05/13/these-drones-will-deliver-blood-and-supplies-across-rwanda.html

Some companies have already started using drones to drop medical supplies to rural areas. For instance, the California start-up Zipline International is instituting plans to deliver blood to transfusion clinics across Rwanda. In Haiti, Doctors Without Borders ran a test delivering dummy TB samples by drone.9 “Medical drones poised to take off.” Mayo Clinic. 17 June 2016. http://www.mayoclinic.org/medical-professionals/clinical-updates/trauma/medical-drones-poised-to-take-off And in the US, the first FAA-approved drone delivery of medical supplies happened last year in rural Virginia. Matthew Sweeney, who is the CEO of the drone company involved said, “In this area, we had 3,000 people camping out for medical care in cars, blocking single-lane roads on the way to the medical clinic. In circumstances with traffic congestion like this, or over rugged terrain, or in emergency scenarios like Katrina, drone delivery provides the fastest and most reliable method of delivery of emergency supplies.”

Stepping back from Sweeney’s comments, one might wonder at a world where on the one hand, technology has advanced to a place where drones will be flying supplies to exactly the right spot, while on the other hand, 3000 people in a community are so desperate for medical care that they’re car camping to get help. The takeaway here might be that healthcare gravitates to where the money is, and right now, drones seem poised to be the next big (profitable) thing–not to undervalue their potential usefulness in crisis situations. On the other hand, it should be noted that some of the areas that are initially being targeted for medical service by drones–Rwanda, Haiti, etc.–are among the poorest and most remote areas on the planet. Such is the paradox of technology.