Ugly in the Eye of the Beholder 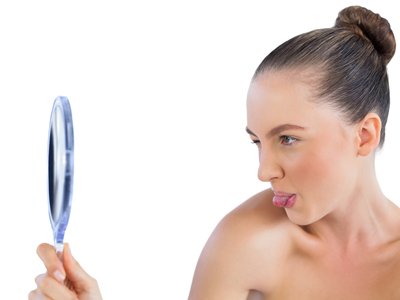 Dove (the makers of the “beauty bar” soap) recently recruited female volunteers to participate in a blind studyabout how they viewed themselves, particularly physically.

If beauty is in the eye of the beholder, it holds that the same goes for ugliness. To test out the maxim, Dove (the makers of the “beauty bar” soap) recently recruited female volunteers to participate in a blind study.1 Stampler, Laura. “Dove’s New Beauty Ad Makes Women Look Gullible and Kind of Dumb in the Name of Real Beauty.” 9 April 2014. Time Magazine. 10 April 2014. http://time.com/55802/doves-new-ad-makes-women-look-gullible-and-kind-of-dumb-in-the-name-of-real-beauty The women met with psychologist Dr. Anne Kearney-Cooke from Columbia University and answered questions about how they viewed themselves, particularly physically. Then, they were issued a new “beauty patch” called ‘RB-X.’ The women were instructed to wear the patch for 12 hours a day over a period of several weeks. The women were not informed as to function or ingredients in the patches, and they accepted that condition since they knew they were subjects in a study. Apparently, they hoped the patches would make them feel more beautiful, without knowing exactly how that would occur.

Before receiving the patch, Dr. Kearney-Cooke interviewed the subjects in depth. Most revealed deep insecurities.  Parts of their interviews were featured in a short video released by Dove. “If I was more confident I would have the ability to like approach a guy maybe,” one says. Another remarks, “I … avoid marriage lately because I, you know, feel bad about myself.” And a third said, “I almost kind of avoid mirrors lately, because I feel a little uncomfortable with things.”

Upon receiving the patch, the women were instructed to keep a daily video diary. At the outset, most of them reported that they didn’t feel any effects at all from the patch. After a few days, though, they seemed to uniformly notice that they felt better about themselves. Not only that, but other people seemed to take notice, too. A subject reveals that, “One of my coworkers said I look really pretty and I thought that was really cool.”

As the days passed, the effects of the patch became more pronounced, and by day 10, the subjects were positively gushing. “I feel beautiful whether I’m sick, tired, or the fact that there’s a pimple on my nose,” one says. “I felt very comfortable in my skin today,” another reports on day 12. And by the conclusion of the study, the women seemed transformed.  “Definitely, it’s been a life-altering experience,” says one, summing up the sentiments experienced by the other participants.

Dove’s four-minute video, which shows snippets of the women at the outset and then after two weeks, plays like an infomercial for the patch. The climax comes when Dr. Kearney-Cooke asks a participant if she’d buy the patch and the woman makes clear that it would certainly be a good investment. But then, there’s a surprise ending, when Dr. Kearney-Cooke informs the women that the patch is a placebo. There’s nothing in it, she tells each participant. At that point, the women get teary-eyed and have the hoped-for epiphany: they realize that beauty is a state of mind. It turns out that the project is part of Dr. Kearney-Cooke’s ongoing research into women and self-esteem.

Interestingly, there’s been a huge outcry from critics who complain that the video makes women look stupid. A Time Magazine headline screams, “Dove’s New Ad Makes Women Look Gullible and Dumb in the Name of ‘Real Beauty.'” Author Laura Stamper writes, “I just can’t believe the thinly-veiled marketing ruse that there is a patch that can make us more beautiful. It makes women seem too gullible, too desperate, and overall helpless against the all-knowing master manipulators at Unilever.” Likewise, the Fashionista headline proclaims, “Dove’s Latest Beauty Ad Misses the Mark,”  and author Cheryl Wischnover comments, “I can’t take the message seriously when it comes from a beauty conglomerate that directly profits from women’s insecurities by selling us things to keep our skin looking younger and our armpits from stinking…The source taints the message.”2 Wischover, Cheryl. “Dove’s Latest Video Ad Misses the Mark.” 9 April 2014. Fashionista. 10 April 2014. http://fashionista.com/2014/04/dove-video-ad-patches Perhaps New York Magazine’s headline packs the most direct punch. “This Dove Ad is Garbage,” it says.3 RumblePitch. “Dove’s Latest Ad Tricks Women into Wearing False Beauty Patches.” WPRO. 11 April 2014. http://www.630wpro.com/common/more.php?m=58&ts=1397088304&article=64506BB4C06711E3B51EFEFDADE6840A&mode=2 Other critics accuse Dove of hiring actresses to play the subjects, which Dove denies, and of being “master manipulators, using the message that “you are already beautiful” in a cynical way to bring attention to the Dove brand name.

Some observers, though, might feel that it’s a relief to see a personal care commercial for once that doesn’t tout some highly toxic product, even if the hope is that viewers will be seduced into finding those products in the end. It may be that the commercial is stupid and manipulative, but on the other hand, one can’t deny that women will do or believe illogical things in order to feel beautiful. If women weren’t willing to put their minds on hold in order to gain more beauty, there might be no hair dye industry, no botox, no high heels, no makeup containing dangerous chemicals.

While the commercial may, in fact, be scripted, it’s also true that there’s plenty of evidence indicating that our self-perceptions not only get skewed by inner beliefs that have little to do with outer realities, but in fact, the way we perceive ourselves can affect our outer appearance. Most of us know people who, feature by feature, might not be good-looking, and yet who radiate attractiveness because they feel attractive inside. The reverse also is true: beautiful people can appear ugly when depressed, withdrawn, insecure, or angry.

The fact is, studies show that 80 percent of women believe they are unattractive.4 “Mirror, Mirror.” Social Research Issues Center. 11 April 2014. http://www.sirc.org/publik/mirror.html More than half have a distorted idea of what they actually look like. The burden of feeling ugly is no small thing for many of these women. It may be a contributor in the rampant depression that leads one in four women in her 40s and 50s to take prescription antidepressants.5 Rabin, Roni Caryn. “A Glut of Antidepressants.” 12 August 2013. The New York Times. 11 April 2014. http://well.blogs.nytimes.com/2013/08/12/a-glut-of-antidepressants The issue extends to the much younger set, too. Eighty-one percent of 10-year-old girls have already been on a diet.  If there’s a reason for outrage, it might be more appropriate for that sentiment to be directed at the media machine and at all the advertisers who exploit the medium to play on the abundant insecurities women so readily embrace. And in this particular case, maybe we should give a tip of the hat to Dove for bringing the issue to the fore.