Men and Women Really Are Different 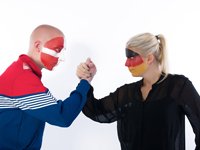 “Sometimes I wonder if men and women really suit each other.  Perhaps they should live next door and just visit now and then.” — Katharine Hepburn

Men and women may not really be from two different planets, but anyone who has ever lived with a member of the opposite sex can tell you that there are times it can be hard to believe they are part of the same species.  In the perpetual “nature versus nurture” debates, those in the nurture camp will expound on how we are all born the same and it is only society’s influence that creates these differences in the way men and women behave.  However, now there is potential evidence that the nature proponents may have a point. A new study, making waves in both men’s health issues and women’s health issues, has found actual discrepancies in the brains of males and females starting at a very young age that may be responsible for behavioral distinctions between the genders.

The research, which took place at the University of Pennsylvania in Philadelphia, discovered that brain scans taken of children and young adults are different depending on the gender of the individual.1 Dotinga, Randy. “Scans May Support Venus/Mars Divide Between Sexes.” WebMD. 2 December 2013. Accessed 12 December 2013. http://www.webmd.com/sex-relationships/news/20131202/brain-scans-may-support-venusmars-divide-between-sexes   The subjects were 428 males and 521 females between the ages of eight and 22.  Each of them underwent an imaging scan so the scientists could observe various parts of their brains.  The pathways were examined to get a better sense of the wiring and connections between different areas.

Using Diffusion Tensor Imaging to focus on white-matter nerve fibers, the scans showed distinct differences between the average female brain and the average male brain, starting right around the time of adolescence.  In general, the male brain was found to display better connectivity within various areas of each hemisphere.  In contrast, the female brain was found to display better connectivity between the two hemispheres, with pathways crisscrossing both left-to-right and right-to-left.  These divergences were not noticeable in the youngest participants; they developed as the children approached their teenage years and then remained in place.

According to the researchers, male connectivity translates to a predisposition toward a quick assessment of a situation and an equally rapid response on the part of most men, particularly in cases when physical action may be required. No wonder men never want to ask for directions when they’re lost. Act now; worry later.  In women, the natural tendency appeared to be more focused on processing information thoroughly and on an emotional level.  So it would appear that the old stereotypes of men as rushing to take matters into their own hands and women talking about their feelings and studying an occurrence from every possible angle may be rooted in true biological differences based in the brain. Keep in mind that one mode is not necessarily better or more advantageous than the other…just different.

This is not the first research to consider whether there is some variation between the brains of men and women.  A 2010 study at the University of California, Los Angeles, looked at brain scans of adult twins and found there were major disparities in mixed-sex twins, particularly in the frontal lobe, an area responsible for speech, making decisions, and self control.2 Jahanshad, Neda; et al. “Genetic Influences on Brain Asymmetry: A DTI Study of 374 Twins and Siblings.” Neuro Image. 15 August 2010. Accessed 13 December 2013. http://www.ncbi.nlm.nih.gov/pmc/articles/PMC3086641   As our technology improves, allowing us to visualize the brain much more clearly, we appear to be gaining quite a bit more evidence that differences are natural and part of a biological process.

However, that doesn’t mean we should just throw our hands up and say, “My spouse will never understand me!”  We might not be able to “easily” change the connections in our brains, but it is indeed possible.3 Ben Mauk. “Music Training Changes Brain Networks.” May 11, 2009. The DANA Foundation. (Accessed 13 Dec 2013.) http://www.dana.org/news/braininthenews/detail.aspx?id=21764 And we can all benefit from learning a little compromise and trying to meet somewhere in the middle.  Men, if you know you’re the type who rushes into action a little impulsively much of the time and this causes friction with your significant other, make the effort to talk with her before you jump in with both feet. And use your GPS when you’re lost! And women, if you rehash every little detail of an event ad nauseum, it might be high time to give your guy a break and let certain things go.  Tell your significant other about what they do that makes you happy as well as what’s bothering you to keep the lines of communication open and healthy. Remember, all relationships depend on a lot more than one specific area of your brain.