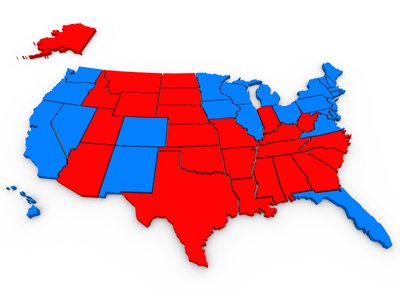 It can be an admirable thing to take your beliefs seriously and fight for them. Even if you don’t have a career in government, plenty of people stand up for important issues in ways big and small. Whether you never miss a chance to vote, put a placard supporting a favorite politician on your lawn or in your window, or spend time volunteering for a particular cause, you are exercising your democratic rights and promoting your ideology. The only problem is, that ideology could impact your health. According to new research, certain areas of the political spectrum may be associated with an earlier mortality.

The study, which was conducted by scientists at Harvard University School of Public Health in Boston, Massachusetts, and Columbia University Mailman School of Public Health in New York City, found that individuals identifying as ideologically conservative were more likely to die during the time of the study period than were those identifying as liberal.1 Khan, Amina. “Do conservatives die sooner than liberals? New study weighs in.” Los Angeles Times. 29 January 2015. Accessed 1 February 2015. http://touch.latimes.com/#section/621/article/p2p-82669405/ Although the researchers were out of Harvard, a recognized center of liberal thinking, the subjects were 32,830 American adults from all over who had been participants in the General Social Survey, an annual sociological data collection method, from 1976 through 2008.

The researchers categorized the participants by their affiliation with a political party, concentrating on the three major parties/groupings of Democrats, Republicans, and Independents. They also separately grouped them based on their political ideology regardless of party affiliation as liberals, moderates, or conservatives. The scientists then used the National Death Index record database to identify all of the volunteers who had died as of the end of 2008, which was a total of 28.2 percent of the overall number of subjects.

After adjusting for a variety of potentially influential factors including age, socioeconomic level, ethnic background, gender, and the location of a participant’s residence, the researchers came up with some interesting results. Being a Republican or Democrat didn’t make much of a difference in expected lifespan, but registered Independents were found to have a somewhat greater chance of outliving members of either of the two major parties.

On the other hand, political ideology did seem to matter regardless of party affiliation. It had a notable effect on mortality. Those with a liberal bent appear to live longer than their righter-leaning counterparts. In fact, both moderates and conservatives had approximately a six percent greater chance of dying by the end of the focus period compared to those identifying as liberals.

Maybe there is some as-yet-undefined reason why a liberal type might enjoy a longer lifespan, especially if he or she is also affiliated with the Independent party, but these researchers did not postulate any hypothetical theories. The study does not prove cause and effect, but simply identifies a link between political stances and mortality. It’s also important to keep in mind that people are not static in their beliefs, so it’s certainly possible that a segment of the participants had transitioned at some point to become more liberal or more conservative as they aged or had switched party affiliations. Then again, as we have discussed previously, your ideological bent may have a genetic connection. If so, the same genes that impact your liberal/conservative leanings may also impact your health, putting your health within the bounds of ideological bent.

Before you consider jumping ship on your politics to improve your longevity, remember too that other findings on the topic of ideology and health have not necessarily come to the same conclusions. In fact, a 2009 study, also out of Harvard University, determined that Republicans were approximately 25 percent less likely than their Democrat peers to report themselves as being in poor health, possibly because they were 15 percent less likely to smoke.2 Subramanian, SV and Perkins, Jessica M. “Are republicans healthier than democrats?” International Journal of Epidemiology. 5 March 2009. Accessed 2 February 2015. http://ije.oxfordjournals.org/content/39/3/930.extract

Ultimately, of course, the future of your health and how long you live probably have little to do with the party to which you belong and much more to do with the way you take care of yourself. Focusing on eating a nutritious diet, keeping excess pounds off, and maintaining a daily exercise routine will be far more influential on your continued health and your ability to live to a ripe old age than who you voted for in the last election.