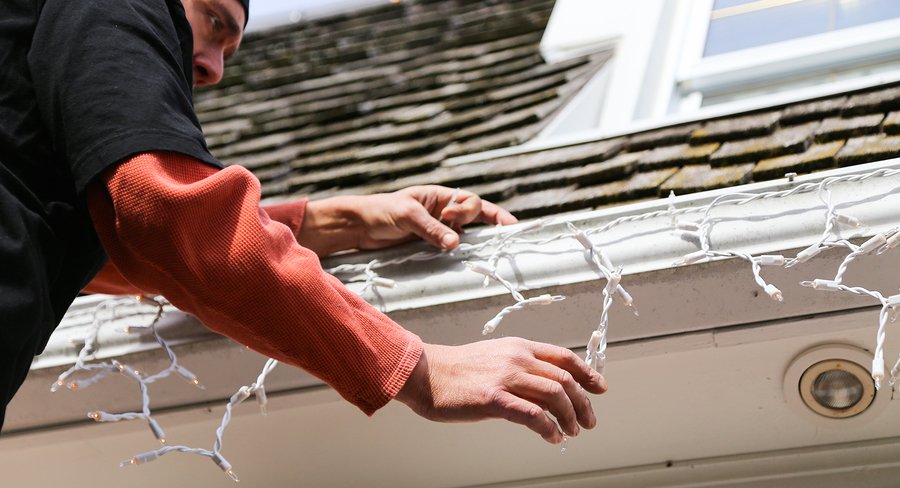 Santa Claus may dash through the snow without skidding or crashing the sled; he may wriggle down the chimney without pulling muscles or scraping skin. But unfortunately, for those of us who aren’t North Polers, the holiday season incurs certain risks for which we pay the consequences that we might not be aware of. And those risks aren’t all due to eating too much rum cake or imbibing too much holiday cheer. For instance, a surprising number of accidents happen each year as people decorate their homes with lights and trees. On a typical year, about 6000 people in the US get injured as they put up their Christmas décor, with at least 3000 of those toppling off roofs or tumbling off ladders as they try to string lights or plant inflatable Rudolphs and the like.1 “Christmas Home Accidents.” 14 December 2016. Accident Doctor. 16 December 2016. http://accidentdoctor.org/christmas-and-holiday-accidents/ It’s not a good way to usher in the new Year, and it also gives new meaning to the song “All I Want for Christmas Is My Two Front Teeth.”

Most of these accidents could be prevented by applying a dose of common sense, but Christmas decorating tends to induce an enthusiastic thrall that can lead to abject stupidity. Grandpa teeters on a flimsy chair to get the star on top of the tree; Dad climbs onto the roof when it’s icy. As Dr. Ryan Stanton, a spokesman for the of American College of Emergency Physicians says, “People who aren’t typically accustomed to climbing on ladders are getting up on them at this time of year. It tends to be wet, and ladders are really slick.”2 Marcus, Mary Brophy. “Holiday health hazards: How to stay safe this season.” 15 December 2016. CBS News. 16 December 2016. http://www.cbsnews.com/news/holidays-health-hazards-illnesses-accidents-how-to-stay-safe/

Prevention tip? Don’t get on the roof unless you’ve done it before, you’re in great shape, you have excellent balance, and the weather is dry. Wear cleats if you have them; if not, order a pair or get Cougar Paws boots before prancing on the asphalt.3 MacDonald, Chip. “Safety Advice: Get a Grip.” 1 August 2006. Roofing Contractor. 15 December 2016. http://www.roofingcontractor.com/articles/83488-safety-advice-get-a-grip Professional roofers are careful about the shoes they wear, and you should be even more so. Don’t climb ladders without having a partner to spot you. Better yet, hire someone to do the job for you and make sure your handyperson has casualty insurance.

A related subset of injuries involves extension cords, which cause an average of 4000 accidents that send people to the emergency room during each holiday season.4 http://www.vevo.com/watch/nat-king-cole/the-christmas-song-(chestnuts-roasting-on-an-open-fire)/USVC55600810 Imagine having a glass of holiday champagne and then, in your jubilation, tripping over the extension cord and ending up with a broken ankle, sprain, or even a concussion. Apparently, such accidents happen with some regularity. In addition to tripping and falling incidents, the cords cause lacerations, cuts, and burns, with 13 percent of the injuries suffered by children. In fact, the most common extension cord mishaps occur when kids put the chords in their mouths and suffer oral burns. Burns also happen when people use indoor extension cords for outdoor lights and fires erupt. The same can happen when indoor bulbs go outside. Make sure your extension cords have no cuts or breaks or frayed places, and that they’re rated to accommodate voltage appropriate to the lights you have hooked up to them.

Fires are a leading source of holiday accidents. While the idea of chestnuts roasting on an open fire might seem romantic when Nat King Cole croons, the romance goes by the wayside when the flame catches on the dried-out Christmas tree.5 “Holiday Data and Statistics.” 1 March 2015. ESFI. 17 December 2016.
http://www.esfi.org/resource/holiday-data-and-statistics-359 Fire injuries skyrocket during the holiday season, causing an average of 400 fatalities and 1000 serious injuries in the US each year. Christmas trees alone caused an average of 260 fires annually between 2004 and 2008, mostly started because the trees were old and dried out and still had lights hooked up to them. Christmas tree fires are particularly vicious, leading to five times more fatalities than other types of holiday fires.

If you don’t want your epitaph to say “Killed by her Christmas tree,” keep the tree watered, dispose of it properly when it’s time is up, and keep electrical cords off the ground where pets and kids won’t be tempted to play with them or take a bite and where nobody will trip and fall over them. When the tree is ready for retirement, take it to the dump instead of putting it in the fireplace to burn. Remember, dried out trees are extremely flammable and the combustion can get out of control, even in the fireplace.

Even if you don’t have a tree, if you have holiday lights, you need to be careful. About 150 home fires each year are caused by decorative holiday lights. Remember to turn the display off when you go to sleep or leave home, replace old, broken bulbs, and make sure the voltage of the light strand is supported by your outlet. And finally, put out the burning candles unless you’re present and awake to supervise; candles cause 45 percent of all holiday fires.

If falls or fires don’t diminish your holiday joy, then you want to be sure you don’t suffer an accident driving somewhere. Car accidents rise sharply during the time between Christmas and New Year’s. On Christmas Day itself, accident rates aren’t particularly elevated, probably because so many people are snug at home with the family instead of out carousing. New Year’s Eve, however, is a different story. Accident rates shoot up by 15 percent, with 42 percent of all of those accidents attributable to inebriation.6 Hickman, Charles. “2015 Drinking and Driving Holiday Stats.” 18 May 2016. Guardian Interlock. 16 December 2016. http://guardianinterlock.com/blog/2015-holiday-drinking-and-driving-stats/ During the holiday season in 2015, 1200 died in alcohol-related accidents in the US. Serious injuries from car crashes added another 27,000 plus to the mix. Remember, there are far more people on the roads than usual, and many of those people have had too much to drink, so it’s wise to stay alert behind the wheel and limit your own drinking.

Not only do driving accidents increase this time of year— so do pedestrian accidents. More walkers are killed by drivers on New Year’s Day than on any other day of the year.7 Hickman, Charles. “2015 Drinking and Driving Holiday Stats.” 18 May 2016. Guardian Interlock. 16 December 2016. http://guardianinterlock.com/blog/2015-holiday-drinking-and-driving-stats/ Even Halloween doesn’t score as many pedestrian fatalities, though the streets are mobbed with kids in candy coma. The obvious proviso here is to look both ways and keep your kids on a leash the first day of the year.

The point here isn’t that the holidays are so dangerous that you should stay in bed with the covers over your head, not at all. Rather, the message is that even though it’s a festive season, it’s important to use common sense so that you don’t spend Christmas or New Year’s in the emergency room being treated by a grumpy intern who wishes he was home with the family.

Happiness & Mental HealthHow to Avoid Accidents During the Holidays