Over the past few years, we have heard about some of chocolate’s benefits, and now new research suggests it can reduce stress, lower inflammation, and improve your memory.

The research did not focus on just any old chocolate bar in the nearest vending machine, which typically has significant amounts of refined sugar and fat, but on a specific kind of dark chocolate. The more natural version tested consisted of at least 70 percent cacao, which is the original plant product that all forms of chocolate are derived from. The only thing added was organic cane sugar.

The first trial involved volunteers eating dark chocolate, this time another typically sized bar of approximately 1.5 ounces. Both 30 minutes after the chocolate was consumed, then again two hours after consumption, electroencephalography (EEG) was used to assess the subjects’ brain waves. The testing showed an increase in gamma frequency waves, which demonstrates an increase in cognitive processing abilities linked to memory, clarity of thought, and learning.

For the second trial, participants were also asked to eat a standard-size bar of dark chocolate. Blood samples were drawn both before and after the consumption and analyzed. The researchers discovered increased anti-inflammatory markers and T cells that fight infections. This suggests that the chocolate contributed a clear boost for the immune system.

Both studies are limited by their very small size, involving just 10 subjects each. However, the findings are promising and build on earlier research. These are not the first investigations that have found dark chocolate to offer health benefits, but previous research has mainly provided evidence of its contribution to heart health. A 2020 study at the University of Hull in the United Kingdom showed that consumption of dark chocolate improved cholesterol levels. And a 2017 study at the Harvard T.H. Chan School of Public Health in Boston, Massachusetts found that consumption of dark chocolate is associated with a lower risk of developing atrial fibrillation, a potentially dangerous heartbeat irregularity.3 Mostofsky, Elizabeth; et al. “Chocolate intake and risk of clinically apparent atrial fibrillation: the Danish Diet, Cancer, and Health Study.” Heart. 23 May 2017. Accessed 29 April 2018. http://heart.bmj.com/content/early/2017/05/01/heartjnl-2016-310357.

So, what exactly is it about dark chocolate that might contribute to these beneficial outcomes? Much of it can likely be attributed to flavonoids, which are plentiful in cacao. Flavonoids are an antioxidant that offer significant anti-inflammatory effects, which can provide protection and repair damage at the cellular level throughout the body.

But the key to eating dark chocolate is to find a much higher cacao content than that of a typical chocolate treat. The vast majority of chocolate bars you’ll see at the grocery store are made with milk chocolate, full of empty calories and offering no health benefits whatsoever. Even much of the dark chocolate you’ll find in your shopping is only 55 percent cacao, with the remaining 45 percent made up of sugar.

To have any positive effects, the dark chocolate should be at least 70 percent cacao, as it was in the current research, which provides you with enough of the cacao to actually benefit you. Unfortunately, this is not a case of “if a little dark chocolate is good, a lot would be wonderful.” Moderation is important because even cacao-rich dark chocolate offers about 155 calories an ounce and no other nutritional value. You’re better off eating a little dark chocolate now and then, and relying mainly on other foods that contain antioxidants, as well as vitamins, minerals, fiber, protein, and more, to be your nutritional mainstays.

PS: And for those of you who may have forgotten, what’s good for you is not necessarily good for your pets. Chocolate is toxic to your dogs, as is xylitol, onion, garlic, and macadamia nuts. 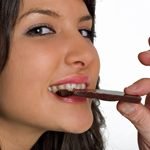