How Honest Are You | Natural Health Blog

Do Little Lies Make Us Into Big Liars?

You might pride yourself on your honesty, but just about every one of us tells a little white lie from time to time. It’s probably to spare someone else’s feelings and most likely done with compassion. After all, it’s not the worst thing to tell a friend upset about a terrible haircut that it really doesn’t look so bad or complain that you’ve been very busy at work when the truth is you just didn’t remember to return a phone call. These kinds of lies are part of polite society and they’re harmless, right? Maybe not as harmless as we’d like to think. According to new research, even seemingly insignificant fibs might trigger effects that turn us into much bigger liars.

The study, which took place at University College London in the United Kingdom, found, perhaps not surprisingly, that telling very small lies may influence our brains to accept dishonesty in a way that might make concocting significant lies come much more naturally.1 Garrett, Neil; et al. “The brain adapts to dishonesty.” Nature Neuroscience. 24 October 2016. Accessed 2 November 2016. http://www.nature.com/neuro/journal/vaop/ncurrent/full/nn.4426.html. The subjects were 80 adults who were placed in a variety of situations in which they could earn monetary rewards that increased with the magnitude of lies they told.

The experiment involved showing the participants a photo of a jar containing pennies. Each volunteer was partnered with an individual in a different room. These partners also could see an image of the jar of pennies, but their photo was unclear. Therefore, it was the subject’s responsibility to suggest the sum of the money they should guess was contained in the jar. The incentive was not based on making the most accurate assessment of the amount of money, however. The rewards were greater if the partner overestimated the value of the pennies due to the prompting of the participant.

There were two versions of the investigation, both of which had the subject earning whatever bonus he or she could by lying about the worth of the pennies in the jar. The first version was structured so that the volunteer was informed that the partner would be sharing in any rewards earned by the overestimating. This may have generated feelings of generosity or allegiance for committing to the lie together, and it made the subjects tell increasingly bigger lies.

But the second version had the participant benefiting more from overestimating and the partner benefiting less. A more selfish side appeared to surface, and the lies grew even more. They started off by suggesting the average value of the pennies was approximately four British pounds and, as time went on, upped their estimates to approximately eight British pounds, increasing their lies to nearly double their personal gain.

Throughout these various scenarios, 25 randomly selected participants underwent brain scans that focused on the amygdala, the region of the brain that is responsible for the processing of emotions. These MRI scans revealed that changes occurred in the amygdala involving a steady drop in activity. This decrease showed that the amygdala was adapting to telling lies, becoming more accustomed to the behavior as the research continued and the lies got bigger. It was so obvious, in fact, that the investigators could predict when lies would grow based on the reduction of activity in the amygdala.

The sample size of the study is quite small, and the results would be stronger if a larger population had been included. Yet despite that, the design of the research makes a good case for the conclusions. Not only was evidence provided in the form of the subjects’ behavior, but the brain scans confirmed that as lying increases, it becomes emotionally easier for us to do.

No one is suggesting that you’re going to go from telling a little white lie to covering up a major conspiracy, but this can serve as a good reminder to keep yourself honest—as much as possible. It’s probably worth noting that a 2002 study at the University of Massachusetts, Amherst showed that telling lies is a common occurrence, with a whopping 60 percent of people telling a lie within 10 minutes of conversation.2 Feldman, Robert S.; et al. “Self-presentation and verbal deception: Do self-presenters lie more?” Basic and Applied Social Psychology. June 2002. Accessed 3 November 2016. http://psycnet.apa.org/index.cfm?fa=search.displayRecord&UID=2002-01693-008. But honesty is a trait to be valued, so try to restrain yourself from telling even itty bitty lies in order to avoid heading down what may potentially be a very slippery slope. And when push comes to shove, it’s probably worth remembering what Mark Twain said about telling the truth: “If you tell the truth, you don’t have to remember anything.” 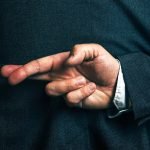