Back in the 50s and 60s, public schools routinely showed the move Reefer Madness to dissuade students from experimenting with marijuana. The trailer for the film makes a frightening case:  “The burning weed with its roots in Hell…[leading to] debauchery, violence, murder, suicide, and the ultimate end of the marijuana addict—hopeless insanity.” By the 1970s, Reefer Madness had become something of a joke to young people in the know. They had smoked pot without becoming addicted, without going on a shooting spree, without jumping off a bridge.

It’s amazing to those who grew up in the shadow of Reefer Madness that now, marijuana is legal in 10 states for recreational use and in 33 states for medical use.1Berke, Jeremy and Gould, Skye. “This map shows every US state where pot is legal.” 4 January 2019. Business Insider. 23 March 2019. http://www.businessinsider.com/legal-marijuana-states-2018-1 But even with such wide acceptance, periodic reports still pop up claiming that smoking or otherwise consuming marijuana can indeed induce insanity, just like Reefer Madness said it would. Are such reports a continuation of the anti-marijuana hype, or is there some validity to them?

The question came up for me many years ago when I personally observed an acquaintance have a psychotic break after getting stoned. I was a social worker back then, and the mental health professionals I knew took it as a given that if someone had latent tendencies toward psychosis, smoking pot could quicken those tendencies and bring on a “psychotic break.” Since that time, numerous studies have examined the relationship between smoking pot and mental health, and based on the research, it does indeed appear that cannabis can trigger psychosis in some individuals and make it worse in others.

The most recent study just came out in Lancet Psychiatry. It involved 901 subjects throughout Europe and Brazil who had recently experienced a first episode of psychosis and 1231 control subjects.2DiForti, Marta, et al. “The contribution of cannabis use to variation in the incidence of psychotic disorder across Europe (EU-EGI): a multicenter case-control study.” 19 March 2019. The Lancet, Psychiatry. 25 March 2019. http://www.thelancet.com/journals/lanpsy/article/PIIS2215-0366(19)30048-3/fulltext Those subjects who used pot daily had three times the incidence of first-episode psychosis compared to those who never used pot. Even more, those who used high-potency pot daily had five times the incidence of psychosis. High-potency means that the THC, or psychoactive component, comprises at least 10 percent of the cannabis, and these days, most cannabis is high-potency.3Wood, Sam. “Daily use of high-potency marijuana linked to higher incidence of psychosis, new study claims.” 19 March 2019. The Philadelphia Inquirer. 25 March 2019. http://www.philly.com/business/weed/marijuana-daily-use-high-potency-physchosis-20190319.html

As we’ve written before, there are two major compounds in marijuana: THC and CBD. It’s the THC that has psychoactive properties and that confers a high, and it’s also the THC that’s suspected of causing psychiatric problems. In other words, the more THC present in a batch of pot, the greater the danger. While almost all “street pot” used to be under 10 percent THC several decades ago, it’s now not unusual to find cannabis with 30-percent THC content, and that’s a huge difference.4http://www.forbes.com/sites/alicegwalton/2015/03/23/pot-evolution-how-the-makeup-of-marijuana-has-changed-over-time/#7e1b93b659e5 If you go to buy recreational pot at a legal dispensary, you’ll find that the typical product contains 20-percent THC, and 30-percent is sometimes available.5Miller, Sean. “Is Cannabis Really More Potent Today than it Was 20 Years Ago?” 20 September 2017. Origins Cannabis. 24 March 2019. http://www.originscannabis.com/marijuana-potency/ Medical marijuana usually has between 11 and 24 percent THC.6http://www.choiceorganicsinc.com/uncategorized/is-medical-flower-really-more-potent-the-differences-between-medical-and-recreational-cannabis/

The striking thing about this study compared to many that preceded it is that the researchers believe high-potency pot can make anyone crazy, not just those with a genetic tendency. “The takeaway is that high concentrations can potentially cause psychotic symptoms in anybody,” said Dr. Fred Goldstein of the Philadelphia College of Osteopathic Medicine, who is researching the clinical effects of THC. “If you must consume, don’t go for high concentrations. You’re better off using a low-potency product.”

Even if you take marijuana for medical reasons, you’d best be careful according to the study director, Dr. Marta Di Forti of King’s College, London. “As the legal status of cannabis changes in many countries and states, and as we consider the medicinal properties of some types of cannabis, it is of vital public health importance that we also consider the potential adverse effects that are associated with daily cannabis use, especially high-potency varieties,” she writes.

Apparently, in Amsterdam (cannabis café central), those who used pot daily had nine times the incidence of psychosis compared to non-users. The authors of the high-potency pot study concluded that “Twenty percent of new cases of psychotic disorder across all our sites could have been prevented if daily use of cannabis had been abolished.” But in countries such as Spain, Italy, and France, where good wine is more common than good pot (in other words, where most marijuana tends to be lower potency), psychosis rates were not as high.

As already noted, earlier studies found that cannabis can bring on a psychotic episode that was probably going to happen anyway. The most powerful risk factors include a family history of psychosis and having certain genes activated, particularly the COMT and AKT1 genes.7“Does Cannabis Cause Mental Illness?” IFL Science. 25 March 2019. http://www.iflscience.com/brain/does-cannabis-cause-mental-illness/ It’s still unknown if people carrying the vulnerable genes or with a family history might have avoided psychosis altogether if they never had tried pot, or if it would eventually have manifested anyway. What is known, according to previous studies, is that using cannabis at any point in life increases psychosis risk by 40 percent, and that risk of schizophrenia is dose dependent. Those who use marijuana more frequently and over a long period of time have twice the rate of schizophrenia compared to nonusers, and as noted above, using high-potency marijuana significantly raises that risk.  Also, while the onset of the first psychotic break typically happens in late teens to late 20s, research has confirmed that using marijuana expedites that process by an average of 2.7 years.

It should be noted that there’s plenty of controversy about the research, with some saying the studies only show a correlation between using pot and mental illness, and not causation—those with psychosis like to get high, they say.8Carey, Benedict. “Does Marijuana Use Cause Schizophrenia?” 17 January 2019. New York Times. 26 March 2019. http://www.nytimes.com/2019/01/17/health/cannabis-marijuana-schizophrenia.html They point out that there’s a strong correlation between smoking cigarettes and mental illness, too—the more a person smokes, the higher their risk for mental illness.

The difference is that marijuana does, in fact, alter the brain, as we’ve discussed in the past, and the type of brain changes triggered by cannabis use may well increase vulnerability to psychosis. From the experiential point of view, most people get high and then return to normal when the effects of the THC wear off, but for others, it seems, getting high might set an abnormal process into motion. They get paranoid, they blur the boundaries between themselves and others, and those experiences increase to the psychotic level. 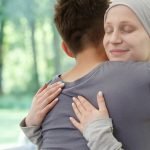 A Hug a Day