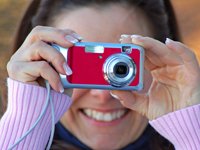 “It’s not what you look at that matters, it’s what you see,” said Henry David Thoreau. He could well have been referring to the typical tourist, shooting scene after scene to preserve the memory of it for the future. With a smart phone equipped with built-in camera in almost every palm these days, many of us have gotten accustomed to pointing, shooting, and posting to Facebook, recording baby’s every expression, or our every adventure. In fact, 300 million photos get posted to Facebook every single day.

You would think all that camera work would help us to remember what we see, but ironically, two new studies just published in Psychological Science reveal that, in fact, taking photos dims our memory of those very things we are trying to record instead of helping us to remember them.1 Matyszczyk, Chris. “Constantly taking photos may mess with your memory.” 10 December 2013. CNet. 15 December 2013. http://news.cnet.com/8301-17852_3-57615075-71/constantly-taking-photos-may-mess-with-your-memory The first study in question sent participants on a tour of the Bellarmine Art Museum in Fairfield, Connecticut. During the tour, the subjects were instructed to examine 15 artifacts scattered around the museum, as assigned, and then photograph them. They followed a particular protocol, first reading the name of each artifact aloud, then examining each object for 20 seconds, and then snapping a picture of it. After that, they were asked to examine 15 more objects for 30 seconds each, simply looking without taking any pictures.2 Landau, Elizabeth. “Eyes are better at mental snapshots than cameras, study suggests.” 10 December 2013. CNN Health. 14 December 2013. http://www.cnn.com/2013/12/10/health/memory-photos-psychology

The next day, subjects were asked to name those artifacts that they had seen. Then, they had to recollect details about those objects.  They also were presented with a list of artifacts and were asked to pick out the objects they had examined from the list.

It turned out that the subjects did a far better job of identifying the objects that they had not photographed, but had simply looked at. They also remembered far more detail about those objects.

The study director, Linda Henkel of Fairfield University, dubbed this phenomenon the “photo-taking impairment effect.” She said, “People so often whip out their cameras almost mindlessly to capture a moment, to the point that they are missing what is happening right in front of them.” But it would seem there’s more going on than that. After all, the subjects examined the objects before they photographed them. It’s almost as if the act of taking a photograph actually negated the benefits of prior observation.

Henkel also conducted a follow-up study in which she asked participants to zoom in on one particular detail of each object before photographing it. Apparently, this step helped participants to remember not just the detail in question, but also the entire object. Those participants who photographed a detail had recollection equivalent to people who simply looked at the objects, sans camera. Henkel hypothesizes that’s because the brain has to work harder to focus on the detail and to recollect the entire object that the detail is part of.

Before you toss your smart phone camera and opt to return to the rotary dial so you can hold onto your memories, it’s worth noting some of the limitations of these studies. First, the sample sizes were very small, with only 27 subjects participating in the first study, and 48 in the second. Also, the subjects did not get to choose the objects they photographed. Dr. Henkel hypothesizes that memory might work differently when individuals choose what to focus on, and she plans to repeat the study with that in mind. Finally, the participant group consisted entirely of undergraduates, and mostly females.

This last point is particularly significant as a separate study completed in October found that seniors over the age of 60 actually reap memory benefits by learning digital photography. (Note: that’s from “learning” about digital photography as opposed to actually taking the photographs.) That study, out of the University of Dallas, involved 221 individuals aged 60 to 90. The participants got divided into six groups, and each group was assigned to spend 15 hours a week for three months involved in a particular activity: either telling stories, doing crossword puzzles, quilting, playing games, listening to classical music, or learning digital photography. At the conclusion of the study, those who learned digital photography showed far greater memory gains compared to those who did the other activities. The study director, Dr. Denise Parks, says that’s because digital photography requires complex reasoning and memorization of technical details. It’s the challenge of learning something new that helps the brain, rather than the fun of doing something complex, but rote.

Of course, once seniors learn how to operate their cameras and become Facebook post-monsters, they also might experience the phenomenon of remembering less about what they observe than if they had relied on simple concentration. But if they keep upgrading their cameras and learning new photography skills, they may continue to gain overall memory points, which is important for those interested in natural anti aging.

The takeaway lesson here is that it’s important to stop and “see the roses,” instead of merely posting a photo of them on Instagram. This may be increasingly true as we age, since memory diminishes naturally and most of us can’t afford to have it undermined further. On the other hand, learning complex photography skills as we cross into senior-hood might counteract some of the deleterious effects of looking at life without seeing it.